HanaBank win for Pettersen may lend to No. 1 ranking 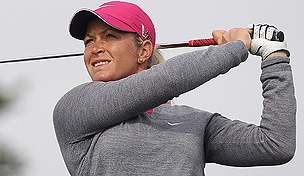 Getty Images
PARKER, CO - AUGUST 18: Michelle Wie of the USA Solheim Cup reacts after missing a putt on the 18th green during the final day singles matches of the 2013 Solheim Cup at the Colorado Golf Club on August 18, 2013 in Parker, Colorado. (Photo by Andy Lyons/Getty Images)  -

Suzann Pettersen is poised to send a message to Rolex world No. 1 Inbee Park in Park’s backyard this weekend.

The red-hot Pettersen moved into position Saturday to win her third LPGA title in four starts with another strong round at the KEB-HanaBank Championship. Pettersen, No. 2 in the world rankings, is making a bold move to topple Park from her perch atop the women’s game in Park’s South Korean homeland.

With another round of 3-under-par 69 at Sky 72 Golf Club in Incheon, South Korea, the Norwegian Pettersen moved one shot behind Australia’s Katherine Hull-Kirk (70) and Sweden’s Anna Nordqvist (70). Park (73) is tied for 22nd.

Park built a commanding lead as No. 1 in the Rolex world rankings this summer. It seemed unfathomable that anyone could overtake her in the world rankings or the Rolex Player of the Year race in the second half of the year, and yet that’s just what Pettersen is poised to try to do.

“I keep an eye on it, but it’s not like I wake up and the first thing I glance on is the world rankings,” Pettersen told reporters after her round Saturday. “But I know if I play well towards the end of the year, and I win tournaments, I can possibly take it from her by Christmas. That’s what I’m shooting for, but I won’t be disappointed if I don’t get it. There’s a chance, an opportunity.”

Pettersen has never held the No. 1 world ranking.

After winning the U.S. Women’s Open in late June to claim her sixth LPGA title of the year, and her third consecutive major championship, Park established herself on a majestic peak high above the women’s game. Park (13.27) was a whopping 5.35 average ranking points ahead of then No. 3 Pettersen (7.92) in the Rolex world rankings. Today, Park is a mere 1.27 average points ahead. A Pettersen win Sunday will have her breathing down Park’s neck, less than a point behind with four events left in the LPGA season.

With a victory Sunday, Pettersen will also move within striking distance of taking the lead in the Player of the Year race.

Back in late June, Park sat atop the Player of the Year standings with 281 points. Pettersen was well off the pace with 98 points.

If Pettersen wins Sunday, she could move just 47 points behind Park in the Rolex POY standings, depending on how Park finishes. A victory is worth 30 points. A player has to finish among the top 10 to earn points.

Pettersen is comfortable in South Korea. She’s the defending champ this week and going for her third KEB HanaBank title. She is the only non-Asian to win this event since it started in 2002. Pettersen has a good record overall in Asia. Four of her 13 LPGA titles were claimed in Asia. She also won a Ladies European Tour event in China.

“I expected to be in contention the way I’ve been playing, that’s all I can ask,” Pettersen said of Sunday’s finish. “We’ll see where I go out tomorrow, but I feel pretty comfortable with the position I’m in. It’s not going to be easy.”