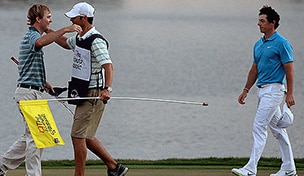 Getty Images
<a href='https://www.instagram.com/p/BBQZIEoxCK4/?taken-by=lexi' target='_blank'>@lexi</a>: Empty gym means gym selfie and beast mode time! ready to get after it  -

When he rolled in a 3-foot putt for birdie on the first sudden-death playoff hole Sunday, it didn’t feel as if he won the Honda Classic so much as he survived it.

They didn’t need caddies coming down the stretch here at PGA National.

They needed EMTs, somebody trained to perform game-saving Heimlich maneuvers.

Rory McIlroy, Russell Knox, Ryan Palmer and even Henley all coughed up chances to win on a back-nine fraught with nervy misfired shots.

Henley ultimately won the four-man playoff because he misfired the least. He won because he made the fewest mistakes coming home and because he hit the best shots in the playoff.

McIlroy was so disenchanted with his back-nine effort, he said winning wouldn’t have felt right.

“I didn’t play well enough at all to deserve to win this tournament,” McIlroy said.

The PGA Tour once marketed itself on the saying “These guys are good.” It didn’t look that way for the longest time on the back nine at PGA National. It looked like “These guys can really shake in their boots.”

Really, mostly, it was a reminder just how hard it is to win a PGA Tour event, especially on a golf course that punishes mistakes so severely.

“It’s a tough course, especially when you’re in the thick of things,” McIlroy said. “It’s hard to make birdies coming down the stretch there.”

Henley, 24, started the day two shots behind McIlroy and won with a 2-over-par 72. He won shaking off a cold start to the new year missing three of his last four cuts.

Henley won with an inauspicious start to the Bear Trap, the 15th, 16th and 17th holes. There’s a large statue of a bear there in honor of “The Golden Bear,” Jack Nicklaus, who designed the trio of holes. The inscription at Bear Trap entry reads: “It should be won or lost right here.”

Henley must not have read it. He rinsed his tee shot at the 15th, pushing a 6-iron into the water and making double bogey. He was playing alongside McIlroy and fell two shots behind him there.

“The swing on 15, I didn’t really see coming,” Henley said. “I looked up, and it was kind of fading, and I was a little bit shocked by that.”

Give Henley credit. He wasn’t undone by it. He was undaunted.

“I knew I was going to hang in there no matter what happened,” Henley said. “I wasn’t going to let it bother me.”

The Bear Trap took its toll on McIlroy, too.

Despite one pulled, tugged or hooked shot after another, McIlroy somehow managed to still hold the lead before his approach out of a fairway bunker at the 16th splashed short in the water in front of the green. The man who had fiercely closed every 54-hole lead he has held since collapsing in the final round of the Masters in 2011 wasn’t going to close out this one.

“It was very disappointing,” McIlroy said. “It was a perfect opportunity to win.”

McIlroy looked like he might still pull off the win with a magical 5-wood into the 18th, a towering 236-yard shot that landed like it hit a pillow, checking up 11 feet from the hole.

A shot off the lead, McIlroy was putting for eagle and the win, but he pushed it right.

“I wasn’t a very comfortable feeling,” Henley said. “I still just tried to hang in there the best I could and not let my emotions get too up or down, no matter what happened on his putt.”

McIlroy closed with a 74.

“Just got to pick myself up, get back at it and try get myself into contention at Doral next week and get the job done then,” McIlroy said.

Henley wasn’t even qualified to play the WGC-Cadillac Championship at Trump Doral next week. His win gets him there. He’s from Macon, Ga., and played at the University of Georgia. The frosting on his win is that it gets him back into the Masters again, too.

“This is not exactly what I was expecting at the start of the week,” Henley said.

Nor an ending anyone saw coming.