Homecoming week for No. 1 Park, other Koreans 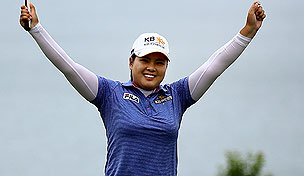 Homecoming is an American fall football tradition, but it works internationally for women’s golf, too.

Because that’s what the LPGA KEB-HanaBank Championship feels like this week.

It’s a homecoming celebration for the 35 South Koreans who will be teeing it up at Sky 72 Golf Club’s Ocean Course in Incheon, South Korea.

There’s even a homecoming queen, of sorts. That would be the “Queen Bee” herself, South Korea’s Inbee Park.

This week’s event marks the first time Park will play in her homeland since she ascended to No. 1 in the Rolex Women’s World Golf Rankings back in April.

“It’s an honor to be able to come back home as the No. 1 player,” Park said in a pre-tournament news conference. “It’s very meaningful to me.”

For all she has achieved this year, Park probably ought to get a crown, an arm full of flowers and a red-carpet walkway to the first tee for Friday’s start of the 54-hole event. She has won six LPGA titles in 2013, three of them major championships. Babe Zaharias (1950), Mickey Wright (1961) and Pat Bradley (1986) are the only other women to win three majors in a single season.

“Probably one of the most significant accomplishments in golf in a very, very long time,” American Cristie Kerr said this week.

The South Koreans have achieved just about everything in women’s golf. They’re the dominant force internationally, but there remains a missing jewel. No South Korean woman has won the LPGA’s Rolex Player of the Year Award since its inception in 1966.

Park looks like she’s going to put South Korea’s mark on that, too. A victory this week would put her on the brink of clinching the award.

Park has built a commanding lead in the Rolex POY standings. With 290 points, she sits 77 ahead of Suzann Pettersen and 90 in front of Stacy Lewis. The top 10 finishers in an event earn POY points. A victory is worth 30 points, second place 12 points, with points awarded down to a single point for 10th place.

With just five events remaining this season, Pettersen and Lewis probably have to win at least two of those to have a chance to overtake Park for Player of the Year, possibly three, depending on how Park finishes.

Park has won six times this year, but she is looking for her first title in more than three months, since she claimed the U.S. Women’s Open in June. Though Park has the large lead in the POY race and in money winnings, she feels Pettersen and Lewis pushing her.

Pettersen is the defending champion this week.

“Although I’m No. 1 in the world, I still have a lot of things to get better at,” Park said. “I wouldn’t say I’m a complete player as of yet. I’ve had a lot of wins this year, but I don’t think I have been as consistent throughout the year as Suzann or Stacy. I think my second half has been a little slow, but I think I’m learning a lot from watching those two players and how consistent they are.”

Park has made seven starts with one top-10 finish since her last victory at the U.S. Women’s Open at Sebonack. She spoke of the exhausting nature of trying to become the first man or woman to win four professional majors in a year when she fell short of doing so at the Ricoh Women’s British Open in August.

This “homecoming” game might be just what Park needs to find that winning spark again, but there are a lot of South Koreans this week looking for the same spark.