Hot Seat: Can Murray pull a 'Groundhog Day' at Pebble? 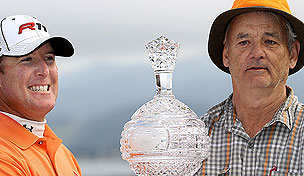 Time again to gauge who is facing the most heat in golf.

Can the comedic master muster a 'Groundhog Day' reprise?

Murray worked out his perfect day in the final round of last year’s AT&T Pebble Beach National Pro-Am, winning with D.A. Points. The world will tune in to see if Murray can live that day all over again and repeat with Points as his partner.

Or, in the immortal words of weatherman Phil Connors, is there something bleak ahead?

“I’ll give you a winter prediction,” Murray said as Connors in 'Groundhog Day.' “It’s gonna be cold, it’s gonna be gray, and it’s gonna last you the rest of your life.”

Win or lose, Murray will be cast in a starring role again at Pebble Beach.

Is this the week the lid blows?

Is this the week Woods ignites a wave of hype and hoopla with a return to his winning ways?

If Woods wins the AT&T Pebble Beach National Pro-Am, you will need a Richter Scale to measure the reaction.

With the pieces of Woods’ game beginning to come together again, a breakthrough feels imminent.

A return to Pebble Beach might be just what Woods needs to put it all together. This is where he fashioned the most dominant performance in the history of the game, his 15-shot rout at the 2000 U.S. Open. He hasn’t played the AT&T at Pebble Beach since 2002.

Levin had to feel sick after coughing up a six-shot lead in the final round of the Waste Management Phoenix Open, but there’s a sure-fire cure.

Kyle Stanley showed Levin and everyone else the best medicine.

Stanley won the Phoenix Open a week after his collapse outside San Diego. With Levin in the field at Pebble Beach, he has a chance to extend an extraordinary storyline, to make it back-to-back rebounds from collapses for PGA Tour winners. It seems like too much to ask, but Levin has good vibes going at Pebble Beach. He tied for fourth there last year.

At No. 65 in the world rankings, Moore might be OK right where he is to make the field into the WGC-Accenture Match Play Championship in two weeks, but he can’t afford to lose ground this week. A good showing at Pebble Beach should clinch the spot, while a missed cut leaves him vulnerable to being jumped in the rankings.

This week is the final chance for players to qualify for the first World Golf Championship event of the year. Sixty-four players make it to Accenture, but the top 64 in the world don’t all want to play. Phil Mickelson has already announced he is taking that week off to be with his family. That makes room for Moore at No. 65, if he can stay there.

With victories in her first four starts last year, Tseng quickly established herself as the dominant new force in women’s golf.

Will she immediately reassert herself in the LPGA season opener at the ISPS Handa Women’s Australian Open at Royal Melbourne this week?

Tseng will be looking to win this title for a third consecutive year.

U.S.-born players will be looking to step up their performances in the LPGA season opener at Royal Melbourne.

Last year, just two American LPGA members won on the tour, Stacy Lewis and Brittany Lincicome. It was the worst American showing in the 62-year history of the LPGA.

Quiros is going for the Dubai hat trick this week.

Last year, he won the Omega Dubai Desert Classic in February, then won the Dubai World Championship at year’s end. He’s going for his third title in Dubai in 12 months in a title defense at the Dubai Desert Classic. It won’t be an easy task. World No. 2 Rory McIlroy, No. 3 Lee Westwood and No. 4 Martin Kaymer are all in the field.