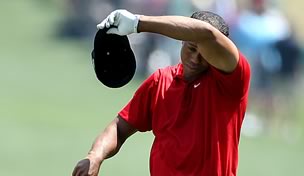 Once a week, the aim is to gauge who is feeling the most heat to perform going into a tournament or major championship.

This week, though, the look ahead spans the entire season.

Tiger Woods, at his best, made the guys teeing it up with him feel like somebody rubbed Deep Heat in their jockeys.

He was a human thermostat able to turn up the heat on foes like nobody since Jack Nicklaus.

A final-round Sunday pairing with Woods was once only slightly less daunting than sitting through an IRS audit.

His 36th birthday in his rear-view mirror, Woods faces the audit now with so many young stars looking to measure themselves against him in late Sunday duels, young stars who built their confidence while Woods did them a big favor getting out of their way.

With five more major championship titles to be won to top Nicklaus’ record, the heat is on Woods to show he can build on his Chevron World Challenge title last month. Fourteen major championships have passed since Woods won his last major at the U.S. Open in 2008, though he’s only played in 10 of them. Still, 14 majors have never passed in the Woods era without a Woods title. The longest previous dry spell was 10.

Time isn’t on Woods' side anymore. Though his knee is feeling better, we don’t know how it will hold up in his bid to pass Nicklaus. That ratchets up the temperature in trying to get there sooner rather than later.

A summer at the Equator: Phil Mickelson

Yeah, sure, he’ll be inducted into the World Golf Hall of Fame in May, but Mickelson would love to make the folks in St. Augustine expand his exhibit in the future.

Mickelson wants to win the career grand slam before he retires, but, at 41, there’s the possibility he’s old for his age with psoriatic arthritis an issue. Mickelson needs to win the U.S. Open and British Open to claim all four of golf’s majors and become just the sixth player since the Masters began to win the career slam.

Donald may be No. 1 in the world rankings, but he’s also the best player in the world who hasn’t won a major.

There’s an invisible asterisk with any major-less No. 1.

Can you lay claim to being the best in the world when you have been shut out in the four most important events in the game? The question turns up the temperature on Donald in this year’s majors. He’s 0 for 34 trying to win one.

The former No. 1 wants that title back, and he would love to take it back winning his first major. At 38, Westwood’s still got time, but the clock’s ticking faster. He’s 0 for 55 in majors.

Fowler just turned 24, but with a profile as high as his, there’s a downside to having no wins to show all those folks who think there’s too much hype.