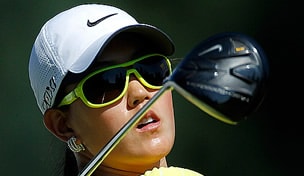 Getty Images
CARMEL, IN - JULY 31: Joey Sindelar of the USA waves to the gallery after making a birdie on the 18th hole during the second round of the 2009 U.S. Senior Open on July 31, 2009 at Crooked Stick Golf Club in Carmel, Indiana. (Photo by Jamie Squire/Getty Images)  -

You might want to loosen your collars, folks, it gets steamy in this space.

It’s time again to see who is taking their places on golf’s Hot Seat.

Here’s our special heat index with the PGA Tour moving to the Northern Trust Open at Riviera and the LPGA heading to the Honda LPGA Thailand at Siam Country Club:

Wie makes her 2012 debut this week at the Honda LPGA Thailand in Chonburri.

A year ago, Wie finished second in this event to Yani Tseng, equaling her best finish of the year in her first winless LPGA season since her rookie campaign.

No matter what happens on the golf course, this is a big year for Wie. She will get her degree with a major in communications, graduating from Stanford this spring. Getting the college education was an important goal for the 22-year-old star.

Wie fans are hoping the freedom to focus solely on golf later this season will inspire a big year on the course.

A two-time LPGA winner, Wie has slipped to No. 17 in the Rolex Women’s World Rankings, making her the sixth highest-ranked American behind Cristie Kerr (No. 4), Paula Creamer (No. 5), Brittany Lincicome (No. 8), Stacy Lewis (No. 9) and Morgan Pressel (No. 16). Wie will be looking to become a factor in the majors again this year. She recorded seven top-10 finishes in her first 11 major championship appearances. She has logged just one in her last 16. A key factor in that is how she’s getting along with her putter. Wie went to a belly putter last summer, experimenting with a variety of grips.

China Syndrome – Whoever holds the 54-hole lead for the Northern Trust Open’s final round.

So whose turn is it to melt down next?

Who will be sentenced to sleeping on the third-round lead come Saturday night at Riviera?

If a recent trend of collapses continues, the PGA Tour might want to consider assigning a priest or rabbi to the locker room to meet with the condemned . . . ah, sorry, the 54-hole leader. The Tour also might want to consider showing some mercy on the poor fellow and drape a hood over his head when he steps to the first tee.

The leaders going off last on Sundays at PGA Tour events have the look of the doomed lately.

Brandt Snedeker came from seven shots back to beat Kyle Stanley in the final round of the Farmers Insurance Open three weeks ago.

Stanley came from eight shots back to win two weekends ago at the Waste Management Phoenix Open.

Phil Mickelson came from six back to win the AT&T Pebble Beach National Pro-Am this past weekend.

The world No. 1 makes his 2012 PGA Tour debut at the Northern Trust Open looking to get off to a better start than he did in Europe.

Donald, who last year became the first player to win the money titles in the same season as a member of both the PGA Tour and European Tour, made a lackluster start on the European Tour two weeks ago. He tied for 48th at Abu Dhabi, finishing 12 shots behind the winner, Robert Rock.

While Donald has some good showings at Riviera, he missed the cut there last year. Before that, though, he finished second, T-6 and T-3.

The defending champ always faces some pressure trying to make sure he shakes all the right hands and appears in all the right places in his return.

Baddeley arrives in good form this week. He was solo fourth last week at Pebble Beach.

With so many folks rooting on the big guy, there’s likely some pressure on Gore in wanting to perform well for all the fans who got him into the Northern Trust Open.

Gore is playing on a sponsor’s exemption, an honor he won with the help of Twitter followers, who mounted a Tweet campaign to get him to Riviera this week.

Back on Jan. 8, Gore tweeted this: “Just signed up for the @ntrustopen qualifier, but you have NO IDEA how stoked I'd be to get a sponsors invitation! #myhometown #mymajor.”

Four days later, the Northern Trust Open offered Gore a spot in the field. Tournament officials then tweeted that news.