Hunger Game: Garcia, Scott both aching for a win 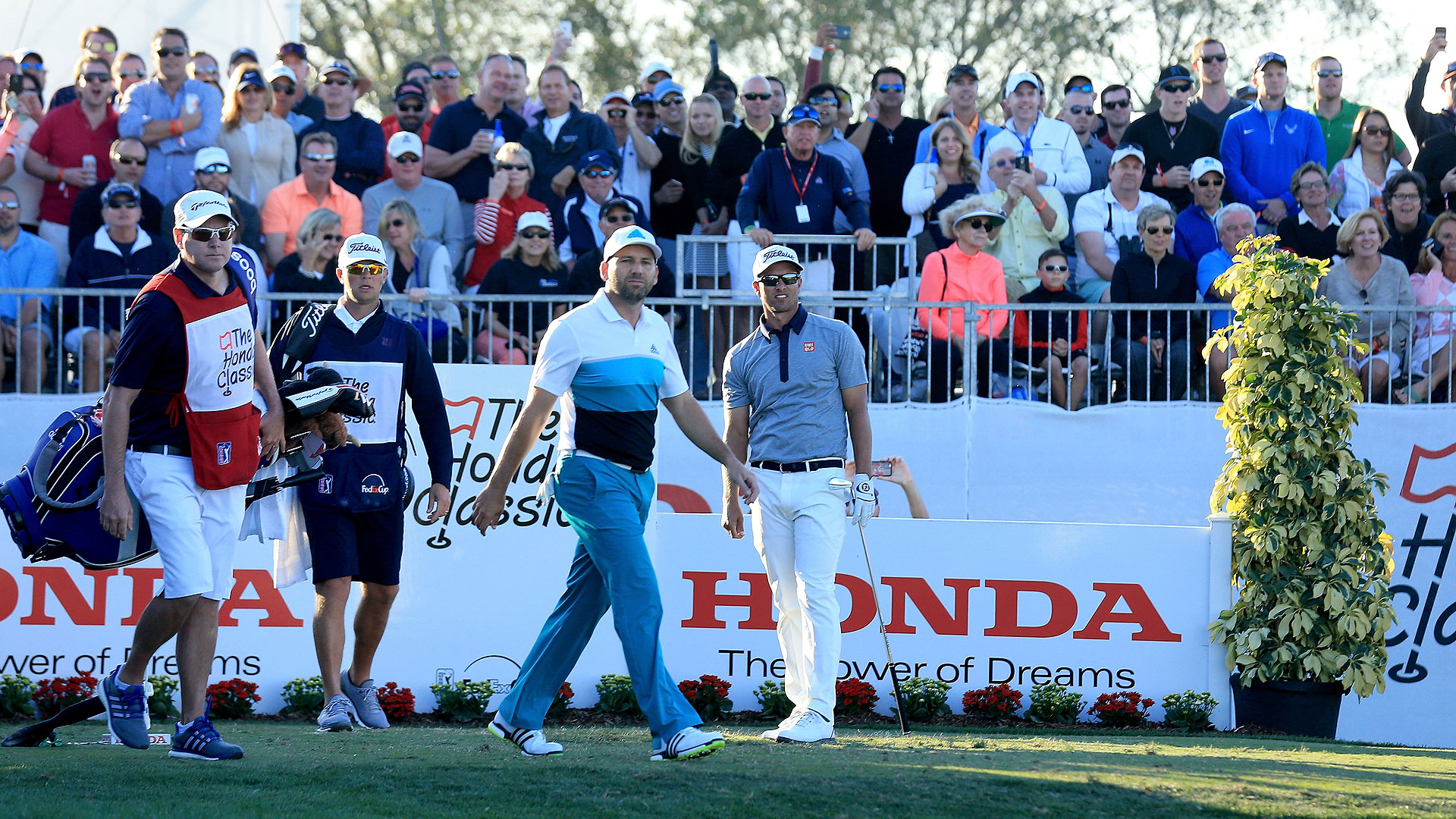 PALM BEACH GARDENS, Fla. – You could call them kindred spirits.

Sergio Garcia and Adam Scott were both once phenoms saddled with great expectations, dashing young stars who were supposed to conquer the world. They’ve enjoyed their share of success, Garcia winning 28 times around the world, Scott winning 27 times, but they’ve also had their share of struggles as they’ve grown to middle-aged veterans. They’ve battled through slumps, fought balky putters and shouldered pressures to win more than they’ve won.

Garcia, the Spaniard, turned 36 last month, while Scott, the Aussie, will turn 36 in July. They both have homes in Switzerland.

“There are some similarities, and maybe things we feel connected by,” Garcia said. “We enjoy each other, and we’re friends.”

They share more than the lead here going into Sunday at the Honda Classic. They share a hunger to end winless spells.

“I think we're both pretty desperate to have a win tomorrow after putting ourselves in this position,” Scott said.

Scott’s last victory came at the PGA Tour’s Colonial Invitational in 2014. Garcia’s last on a major tour was also two years ago, at the European Tour’s Qatar Masters.

Garcia was asked which of them will be more desperate to win if it comes down to them in the end.

“I think we both will want it badly, if it gets to that,” Garcia said. “And, hopefully, it will get to that.”

They are such similar players, supreme ball strikers who may have won so much more had they not battled their putters as much as they have over the years. The big difference between them is the green jacket Scott owns, the Masters title he claimed in 2013. Scott unloaded a lot of pressure on himself breaking through to win a major championship. Garcia’s still dealing with it.

“I guess every year that goes by, it feels another chance has kind of gone by,” Garcia told the BBC last month. “But if I get to 45, and I haven't won any, then I will probably feel a lot of pressure then. But I still feel like I'm young enough to be able to do it, hopefully several times. My appetite is the same.”

Neither is assuming this is a two-man duel.

They know what can happen at PGA National, even if the winds are down, like they were Saturday.

They know what can go wrong with all the water at the 15th, 16th and 17th holes.

As trilogies go, the Bear Trap is an epic tale of wonder and woe.

Scott experienced both Saturday in a dizzying 30 minutes on that trio of holes.

After taking control early in the third round, Scott reminded us how quickly a lead can disappear through that stretch.

Pulling away brilliantly, Scott stepped to the start of the Bear Trap with a three-shot lead and promptly hit a 6-iron into the water at the 15th. The fun wasn’t over for Scott. After taking a drop there, he swatted a wedge from 120 yards over the green and into the water. He had to take yet another drop before walking off the hole with a quadruple-bogey 7.

“It took me five goes to get a ball dry,” Scott said.

In a staggering four-shot swing, Garcia left the green with the lead.

Scott left the hole laughing to himself.

Both these guys have their share of scar tissue. They’ve both bounced back from hard times to win.

After extricating himself from trouble to save par at the 16th, and then stiffing a 6-iron to 9 feet to set up birdie at the 17th, Scott walked out of the Bear Trap back atop the leaderboard, one shot ahead of Garcia, who evened the score back up with a closing birdie.

Neither player is comfortable with just a four-shot cushion.

“So much can happen, especially at a golf course like this,” Scott said. “There's trouble waiting on every misjudgment or poor swing. I'm just going to try and play that solid round of golf and give myself as many opportunities as I can.”

They know what perils leaders face. They saw what happened to Rickie Fowler and Jimmy Walker.

Fowler and Walker went out in the final pairing on Saturday, Fowler with a one-shot lead on Walker.

After playing the first 36 holes bogey free, Fowler made four of them and not a single birdie.

Last year, Ian Poulter took a three-shot lead into the final round and hit five balls in the water.

“I expect some of the guys behind to shoot a number and make it tough on all of us,” Garcia said.