If Jang is feeling pressure, she isn't showing it 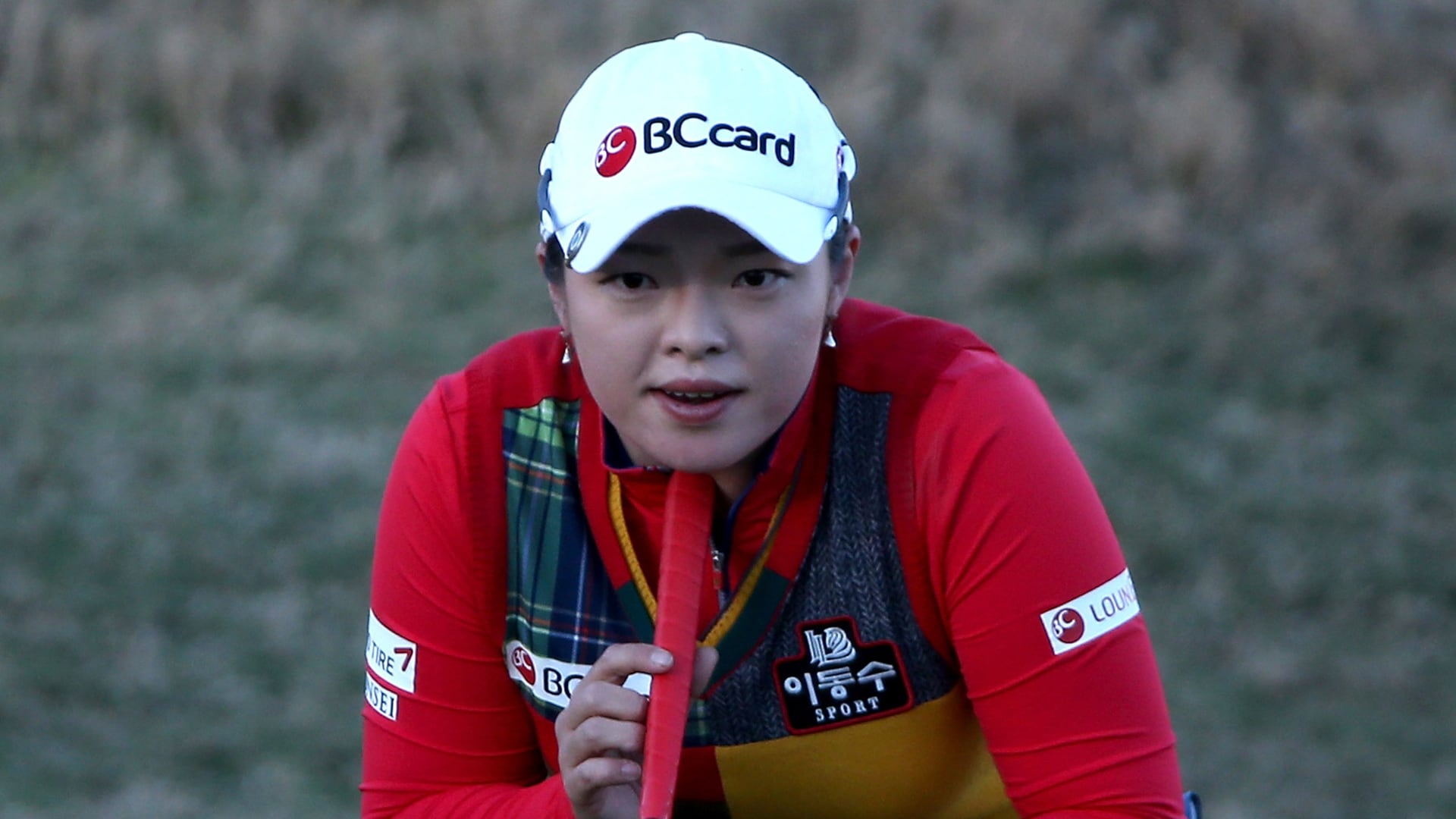 OCALA, Fla. – Ha Na Jang is patiently waiting to break through to win her first LPGA title, but she knows patience runs thin back in her South Korean homeland.

She’s already a star back there.

Jang was a star on the Korean LPGA Tour before she teed it up to start her rookie season in the United States last year.

That’s why Korean fans and media expect her star to keep shining over here.

It’s why there’s pressure ratcheting up after Jang went winless in her rookie debut last season.

Jang, 22, came over with the newest wave of young South Korean mega talents last year, with Hyo Joo Kim and Sei Young Kim. It didn’t ease Jang’s circumstance when Sei Young won three titles on her way to claiming the Rolex LPGA Rookie of the Year Award and when Hyo Joo also won to add to the Evian Championship she claimed as a non-member the year before. Plus, there was In Gee Chun’s success. Chun came over from the Korean tour in July and won the U.S. Women’s Open.

Back in 2013, Jang was the KLPGA’s Player of the Year. She beat out Hyo Joo Kim, Sei Young Kim and Chun for the award.

So with Jang now sharing the lead going into Saturday’s finish to the Coates Golf Championship, there’s escalating pressure to measure up.

“I don’t think about what other players are doing,” Jang said. “I just want to think about playing my game.”

“She is a little different,” Kim said. “She doesn’t really care what other players are doing.”

That isn’t easy given how popular women’s golf is in South Korea and how much scrutiny that nation’s golf stars receive. Jang may live in San Diego now, but she’ll always be a proud product of the South Korean women’s golf programs.

So Yeon Ryu, the 2011 U.S. Women’s Open champion, says the success Koreans have enjoyed playing the American-based LPGA makes it difficult on all the KLPGA stars coming over.

“So many Koreans have won on the LPGA, it makes for more pressure,” she said. “I hate to say it, but with the Korean media, it seems like if you haven’t won, it’s like you’re a failure.”

Jang will get a lot of attention Saturday. She was tied for the lead at 7 under with world No. 1 Lydia Ko when the third round was suspended because of darkness. They’re paired together.

Jang came so close to breaking through last year. She finished second four times, holding the 54-hole in three of those runner-up finishes. She lost the Marathon Classic in a playoff to Chella Choi.

Kevin Kim says all the second-place finishes motivate Jang more than anything her Korean peers have done.

“Second-place finishes, they can be really tough to deal with,” Kim said. “And when you’ve had the lead after 54 holes, it’s especially tough. It’s why she’s working so hard.”

One of Jang’s second-place finishes came at the Coates Golf Championship last year, when she Monday qualified to get into the field and then seized the 54-hole lead. She finished one shot behind Na Yeon Choi, who knows all about the unrelenting pressure to win that Korean players feel coming from their homeland.

After Choi won at Golden Ocala last year, she said she felt great relief ending a two-year victory drought. She said she was overwhelmed by criticism back in Korea. Choi said it got so bad, she considered downsizing to a 2G cell phone so she wouldn’t be able to connect to the Internet to see what was being written about her.

“I got hurt from reading that stuff,” Choi said.

If Jang is feeling pressure to break through this week, she isn’t showing it. She plays with fun-loving spirit. She’s animated, with an easy smile and unveiled emotion.

“She has a lot of positive vibes, great energy,” Ko said. “You can see by her fist pumps. I know she's a really confident player. It’s fun playing alongside her.”

After Friday’s round, Jang said she likes Golden Ocala, because the narrow, tree-lined design reminds her of Korean courses she likes. She also likes where she has her game.