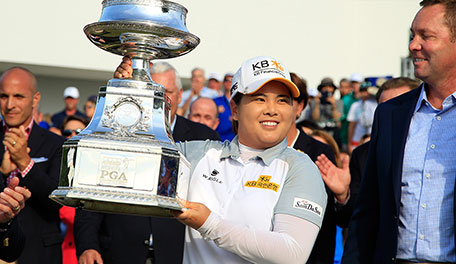 Brought on six years ago to resuscitate a withering tour, the man continues to exhibit a magic touch that makes you wonder if he has some mystical ability in that department, too. Of course, Whan can’t dictate who wins events, and he wouldn’t want to, but Inbee Park was a perfect winner for him and his PGA of America counterpart Pete Bevacqua Sunday at the inaugural staging of the KPMG Women’s PGA Championship. She was perfect because there’s awkwardness in the word “inaugural” in that last sentence.

The only downside for Whan in his tour’s new collaboration with the PGA was the danger that the LPGA Championship’s rich history would be diminished. The KPMG Women’s PGA sounds and looks like a new event in the public’s eye, but not in Whan’s eyes, or in the eyes of so many LPGA founders, pioneers and veterans who helped build the tour. The Women’s PGA is a rebranding of the LPGA Championship. The first LPGA Championship was played in 1955, making it the longest running event staged by the tour itself.

Whan wanted the LPGA Championship’s history kept intact, so the trophy and past champions and records are all preserved as part of this new collaboration.

That’s why Park was a perfect winner for Whan, Bevacqua and KPMG. With Park in the hunt early, the large storyline became whether she could “threepeat,” whether she could join Annika Sorenstam as the only players in the 61-year history of the event to win three consecutive years. Obviously, you can’t “threepeat” in a new event.

It’s almost as if the golf gods endorsed this collaboration by giving Whan and Bevacqaua a “history making” champion.

Park reminded everybody her name wasn’t going to be the first etched on the KPMG Women’s PGA Championship trophy. She reminded everyone of this event’s special foundation.

“When I talked to Pete about this collaboration, I said this is one we have to handle with a little fragility, because of the LPGA Championship’s 61-year history,” Whan said. “I don’t want to toss the trophy. I don’t want to forget the history. It was cool the way we were able to get a little bit of yesterday and tomorrow in the feel of the event.”

Whan’s treatment of the women’s majors is another important piece in his grand reconstruction of the LPGA.

When Whan was originally hired six years ago, his first marching order was to rebuild the sagging, anemic tour schedule. The players demanded it. Ultimately, his future was hitched to it, and he did rebuild it.

With that strong foundation restored, Whan turned his attention to strengthening the majors. The LPGA Championship was sagging in stature. The Kraft Nabisco was in trouble with the title sponsor departing. Whan brought in ANA to take over for Kraft Nabisco this year and there were some vital upgrades to the event. He announced the collaboration that formed the Women’s PGA Championship, too. This was all added to his previous controversial declaration that the Evian Championship was the LPGA’s fifth major.

Whan’s plan is focused on giving the LPGA majors the stability and history they haven’t had. The men have four majors. They’ve had four majors forever, it seems. The women have had eight different events designated as majors over the years. The Women’s Western Open, the Titleholders and du Maurier have come and gone. The Women’s British Open didn’t get its start until 1976 and didn’t become an LPGA major until 2001. There was a spell in the ‘70s when the women only had two majors championships.

Hinging women’s majors to title sponsors has created problems. Whan’s talks with the PGA were revealing in how focused he was on a long-term commitment. He asked Bevacqua if the PGA would consider a 50-year partnership. Bevacqua said the PGA was only interested in a long-term partnership. KPMG brought clout and a vision, too.

Whan said Evian’s elevation to a major was based on knowing Evian was in the women’s game for the long haul.

“The good thing with Evian is they talk about what they’re going to do 30 years from now,” Whan said. “We don’t have many people who talk about their plans over the next 10, 20 or 30 years.”

With Evian played on a course built on a mountain, Whan envisions that major building a history as a journey. He envisions  young women dreaming of making their way “to the Mountain” for the year’s final major.

“I feel comfortable that our next generation of female golfers will feel deeper roots in our majors,” Whan said.

The KPMG Women’s PGA felt like a deep planting.