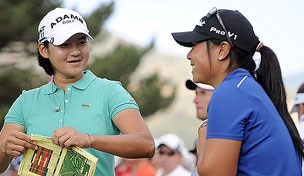 The 18-year-old amateur’s stomach was churning.

Matched with world No. 1 Yani Tseng and U.S. Women’s Open defending champion Paula Creamer Friday at The Broadmoor, Kang’s heart was thumping hard on the first tee with more fans than she had ever played in front of lining the ropes.

“I was really nervous,” Kang said.

But you wouldn’t have known it.

“She didn’t look intimidated to me at all,” said her caddie, Paulton Grayson. “She seemed focused all day long.”

That’s a funny thing, because Kang, the reigning U.S. Women’s Amateur champion, said she was a little bit more of a spectator than she usually is in a round of tournament golf.

“I just wanted to learn what they do on the course,” said Kang, who's from San Francisco. “Obviously, I wanted to play well, but I wanted to watch how they play.”

What did she learn?

“They are very patient and steady,” Kang said. “They don’t make little mistakes; things I do.”

Actually, Kang didn’t make many mistakes in the first round. She looked like she belonged with the best players in the world in their marquee first-round pairing. Kang split the first fairway, stiffed her approach to 15 feet and made par while Creamer and Tseng both opened with bogeys.

By round's end, Kang’s 1-over-par 72 equaled Creamer’s opening score and was a shot better than Tseng’s.

Kang relished matching shots with her accomplished fellow competitors. The largest galleries at The Broadmoor were in tow.

“I loved it,” Kang said. “There were so many people. I wanted to take a picture, but I can’t take my phone out.”

Kang’s nerves settled quickly with Tseng engaging her early in some banter. Kang loved that.

“I’m really talkative,” Kang said. “For me not to talk, it’s really hard. For her to talk to me was really nice.”

With Creamer a less chatty player, Tseng welcomed the banter as much as Kang.

“She was really cool,” Kang said.

Kang’s plans, by the way, don’t include returning to Pepperdine University for her junior year. She’s going to play the Ricoh Women’s British Open in three weeks, defend her title at the U.S. Women’s Amateur next month and then turn professional.

Based on the way she handled the nerves and pressure in Friday’s pairing, Kang looks more than ready for the leap.