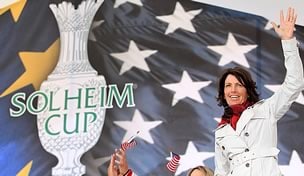 Getty Images
CHARLOTTE, NC - MAY 04: A detailed view of the birthday cake given to Rory McIlroy ahead of the 2016 Wells Fargo Championship at Quail Hollow Club on May 11, 2016 in Charlotte, North Carolina. (Photo by Streeter Lecka/Getty Images)  -

Juli Inkster brings a truck load of victories with her as the next U.S. Solheim Cup captain.

She brings something else that may prove just as valuable to an American team trying to win back the cup after two dispiriting losses.

She brings a sense of perspective that comes with winning seven major championships while raising two daughters safely through their teenage years. She brings the ability to see the big picture, a mother’s gift of knowing how to navigate through life’s overblown dramas without losing sight of what’s really important.

Inkster’s quick wit and famous wisecracks will be part of any formula she takes to Germany when the 2015 Solheim Cup is played at St. Leon-Rot Golf Club outside Heidelberg. She thought the U.S. team looked tight losing last year at Colorado Golf Club, where Europe put a record 18-10 rout on the Americans while winning for the first time on U.S. soil.

“I think it's just really crucial that we go out there and take a little pressure off,” Inkster said in a teleconference Monday. “The girls played tight, and I'd like to see them play a little looser, because on paper we have a great team. Last year they had a great team, but you don't play on paper.

“I'd just like the girls to kind of loosen up a little bit, not worry about whether they win or lose and just go out there and play their games, because if they play their games, I'm pretty confident that they're going to win.”

If a captain's strategy came through Inkster’s first news conference as the U.S. captain, that was it.

Stacy Lewis, looking to play on her third American Solheim Cup team, could have seen that coming.

“When we see all the highlight videos Solheim Cup week, Juli is in most of them, and she's usually dancing around the green and having fun,” Lewis said. “I think that's what she's going to bring to this. Like she said, we've played tight the last few years. We've played to not lose, instead of just going out there trying to win. I think she's going to help us relax a little bit and hopefully have a little bit more fun with it.”

At 53, Inkster has proven herself as a player. She has no interest in being a playing captain. She’s an LPGA Hall of Famer with 31 LPGA titles. She’s the most decorated American to play in the Solheim Cup with team records for most appearances (9), most points (18½) and most matches won (15). Yet, she still loves to play the game. That’s why she remains an active, full-time player on tour.

“Unlike the last few captains, Juli’s been around the tour the last few years,” Lewis said. “She knows us really well. So, I think that's going to help her and help everybody kind of going forward.”

Inkster knows her fellow Americans well. She knows what buttons to push. Her famous sense of humor is sure to be a part of that.

“She’ll kid around with you, needle you in a way that makes it fun for you,” Hall of Famer Patty Sheehan once said of her Solheim Cup teammate. “All the players appreciate her sense of humor, and they admire her ability to balance her personal life while playing golf. I know she’s my hero.”

Inkster got a laugh at the U.S. Women’s Open at the Broadmoor a couple years ago. With all the talk about how she had a chance at 51 to win another major, she walked into the media interview room that week with a cane. When a tournament handed out Juli Inkster bobblehead dolls one year, she examined one with a wry smile. “They gave me a chest,” she cracked.

“Let’s just have some fun with it,” Inkster said of this next Solheim Cup. “It’s not do or die. You’re still going to be the same person when you get on that plane and fly home, but it will be a lot more enjoyable flight if we have that Cup with us.”

That might be Inkster’s ultimate definition of playing for fun.