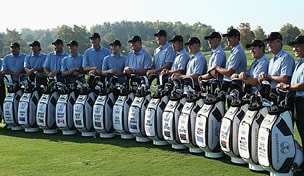 The team colors for the Internationals ought to be black and blue.

The beatings they’ve endured from the Americans in the Presidents Cup have left some ugly marks.

The team flag for the Internationals ought to be white.

They’ve been breaking out the white flag early on Sundays in these lopsided matches for almost a decade now.

And the team captain ought to be Louis Herman Klotz.

For those of you unfamiliar with “Red” Klotz, he is the owner and coach of the Washington Generals, the hapless opponent to the Harlem Globetrotters since the ’50s. Klotz used to play point guard for the Generals, who have gone more than 40 years since they last beat the Globetrotters. Klotz’s overall record against the Globetrotters is estimated to be six wins and 13,000 losses.

Yeah, the Internationals are a bunch of losers. They’re 1-7-1 in these matches.

Sobel: Not a must-win situation for Internationals

Apologies here to Nick Price, the noble International team captain and World Golf Hall of Famer, but he needs help, and that’s where this column comes into play.

There’s nothing like spicy bulletin-board material to motivate the ranks, and so consider this a care package for the Internationals, a gift-wrapped box of insults sincerely aimed to aid and assist the Internationals in making these matches matter. I’d like to say these matches are careening in perilously quick fashion toward irrelevance, but I’m not sure just how relevant they’ve ever really been.

Yes, there are possibilities. There is hope in looking back at how the Ryder Cup evolved from an annual American thrashing of Great Britain & Ireland to the glorious team competition it is today. We get that these things take time, but we also get that time is shrinking in this age of instant information. We also get that if it weren’t for Tiger Woods teeing it up, these matches would get infinitely fewer eyeballs than they otherwise would.

So, really, Captain Price, consider these gifts of outrageous vituperation for what they’re intended, a spark in helping the Presidents Cup evolve more quickly. Consider this package of insults as being offered up for the greater good of the game in the hopes they’ll make the Presidents Cup’s outcome worth caring about.

So, here we go, with earnest sacrificial intent, here it is in black and white, the truth as to why these matches don’t matter more: The Internationals are stinking up these matches with all their losing.

Yes, Ernie Els is a proven winner. He has won four major championships, 19 PGA Tour titles and more than 60 overall professional titles. Angel Cabrera has won a pair of majors. Louis Oosthuizen, Adam Scott and Charl Schwartzel have all won majors, but as a team they head to Muirfield Village this week hoping to help the Internationals win the Presidents Cup for the first time since 1998.

The last time the Internationals won these matches Bill Clinton was president of the United States and Jesse Ventura was the governor of Minnesota. Nobody knew what an iPod or iPad was. That’s because they hadn’t been created. Neither had YouTube.

That’s a long legacy of losing, but the Internationals don’t just change their luck with a victory this week. They make these matches more interesting. The Ryder Cup didn’t really matter until the Americans struggled to win it. The same formula should make the Presidents Cup matter more.

So take these insults as they’re intended, as fuel for a more intriguing Presidents Cup.

Yes, bulletin-board material is more valued in the combative sport of football, but it works in golf, too.

Back before he won the Masters in 1986, Atlanta Journal-Constitution writer Tom McCollister wrote that the Golden Bear was washed up in his return to Augusta National that year.

“Nicklaus is gone, done,” McCollister wrote. “He just doesn’t have the game anymore. It’s rusted from lack of use. He’s 46, and nobody that old wins the Masters.”

Nicklaus’ dear friend, John Montgomery, posted the article on the refrigerator of the home Nicklaus was renting at the Masters that week. While Nicklaus downplayed the significance beforehand, he entered the media room after his stunning victory asking where Tom McCollister was.

“Glad I could help,” McCollister cracked back.

So here you go, Internationals, a little something for your refrigerators, or the bottom of a bird cage.