A. Jutanugarn turns fear of failure into winning focus 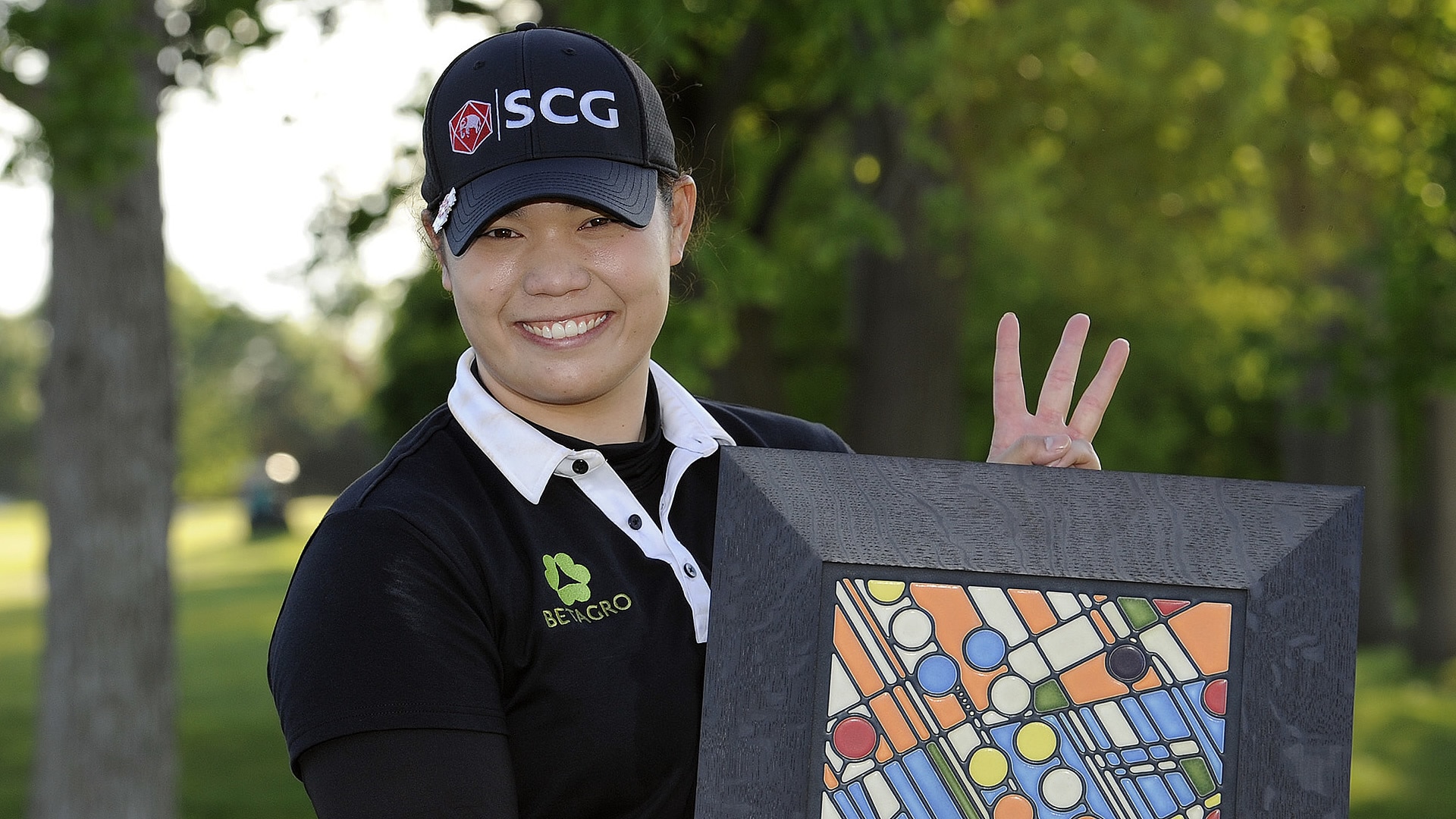 SAMMAMISH, Wash. – Ariya Jutanugarn looks as strong as they come in the women’s game.

With her powerful turn and lash, she looks as if she could knock her tee shots over Mount Rainier at the KPMG Women’s PGA Championship this week.

The naked eye, though, won’t allow you to see the real strength she exhibited rebuilding her game.

You can’t see all the might it took putting her confidence back together after a couple of epic failures and an unexpected injury.

May, that’s what family and friends call the 20-year-old from Thailand, isn’t riding the hottest winning streak in golf to Sahalee Country Club this week because she can hit 3-woods farther than most women hit drivers. She’s looking to win her fourth consecutive LPGA start because she learned to overcome the fear of failure that threatened to consume her. There is a different kind of strength required to win that kind of fight.

“I worried about her for a while,” said Moriya, May’s older sister by 16 months. “But she’s so much stronger because of everything that’s happened.”

May’s victories at the LPGA’s Yokohama Tire Classic, the Kingsmill Championship and the Volvik Championship in consecutive starts last month are especially impressive because of what she overcame to win them.

While this story is about how this broken player put herself back together, it starts with how she got broken.

There was, of course, that meltdown at the ANA Inspiration in April.

That’s where May took a two-shot lead to the 16th tee Sunday at Mission Hills before closing with three consecutive bogeys. She ultimately lost, snap-hooking her final tee shot into the water and then watched Lydia Ko hoist the trophy.

May put on a brave face after, and she said all the right things to the media.

But later, up in the clubhouse, she shook with raking sobs.

“She was bawling,” said Les Luark, her caddie. “She was pretty devastated. We had a heart-to-heart talk for about 20 minutes. It was definitely hard on her, but she learned from it.”

It wasn’t the first time May endured a collapse on a giant stage. Playing the Honda Thailand on a sponsor’s exemption as a 17-year-old, she took a two-shot lead to the final hole. All of her Thai homeland seemed to be huddled around the 18th green, waiting to celebrate one of their own breaking through to become the first Thai to win an LPGA event.

But May closed with a triple bogey to lose to Inbee Park by a shot.

A legion of Thais groaned and winced before marching out of Siam Country Club in a funeral-like procession.

“Everybody walked home crying,” said Moriya, who goes by Mo.

Between those two collapses, there were setbacks even more scarring to May.

There was an injury in the summer of 2013, when she was soaring her highest as a phenom, rising to No. 15 in the Rolex Women’s World Rankings after winning as a rookie pro on the Ladies European Tour and then turning heads with a series of runs on LPGA leaderboards playing as a sponsor invite and Monday qualifier. But that’s also the summer she tumbled off a tee box in a practice round at the LPGA Championship while chasing her sister with a water bottle. May tore the labrum in her right shoulder, and the injury knocked her out of the game for eight months while she recovered from surgery.

When May finally came back in 2014, she wasn’t the same player. She couldn’t make the same shallow move into the ball without pain. So, she altered her swing, moving slightly steeper into her downswing. She began struggling to hit her driver, once the strength of her game. She grew frustrated with the wild shots she hit with it and that impacted the rest of her game.

“I felt OK after the surgery, and I thought I would be OK after a few months, but I wasn’t getting better,” May said. “I couldn’t hit the ball the same way, and then I really started worrying.”

May managed to win her LPGA tour card at Q-School at the end of ’14, and she even got herself in a playoff at the Pure Silk Bahamas Classic early in ’15, but she struggled to find the consistency she once enjoyed. She struggled playing around so many doubts, so many worries that her game really wasn’t going to come back.

Even when the pain finally left her, the doubts didn’t.

“I started playing scared last year,” May said. “I was scared I was going to miss cuts, and I got too focused on that. I kept thinking about all the bad things that could happen, and things just got worse.”

In the middle of last season, May missed 10 consecutive cuts.

“Going through that was worse than what happened at ANA,” May said.

But what happened at ANA proved a pivotal turning point.

With May’s game rebuilt well enough to contend in a major, she saw the last obstacle to overcome. She saw fear still in her game.

After wiping away all the tears at Mission Hills, May left the desert fed up. She left with a resolve she hadn’t felt since her game went sideways after the injury. She confided to Mo that she left ANA telling herself something.

“She told herself that this wouldn’t happen to her one more time,” Mo said. “She said it had already happened to her too many times, and she didn’t want to go through it again. She said she was going to do everything she could to learn how to deal with pressure over the last couple of holes of a tournament.”

They are performance coaches whose work goes beyond the swing. Their most famous pupil was Hall of Famer Annika Sorenstam.

“Pia and Lynn have done worlds of good for May,” Luark said. “They’ve absolutely turned her around mentally.”

Nilsson and Marriott gave May a detailed review of what they saw in the final round at ANA, what clues May was giving off as to how tension and pressure were changing her approach down the stretch.

“All players change in some way under pressure,” Nilsson said. “Some get too tight, some get too fast. Some over read putts, and they get too slow. Everyone reacts to stress.”

Nilsson and Marriott pointed out changes May didn’t realize she was making as pressure mounted.

“May was speeding up,” Marriott said. “She looked tighter, around her mouth and shoulders. Her smiles were becoming forced. She wasn’t taking as deep breaths.”

Nilsson and Marriott teach a routine that includes a “Think Box,” where a shot is planned behind the ball, and a “Play Box,” where the shot is executed with the commitment that was made in the “Think Box.” But they also teach players to be aware of the “Memory Box,” what happens after the ball is struck.

May learned a lot about how the “Memory Box” can affect future shots.

“May is very nice to other players, but she can be very critical of herself after a shot,” Nilsson said.

Luark, closer to May and the action than anyone, confirmed changes he was seeing in May as pressure mounted, problems with how she reacted to shots. He is an important intermediary in the work they’re all doing.

“They tell me things I can do to help her get in a comfort zone,” Luark said.

Luark’s role goes beyond caddie. He has become a sympathetic ear and comforting shoulder when May needs it, but he’s also become a stern, motivating voice when she needs that. May welcomes this. Luark worked with Mo a couple years ago, and May wanted Luark’s big brother approach when she began struggling last year. He picked up her bag in the middle of last year’s run of 10 missed cuts.

Focus is an issue with May. She’s fun loving, but easily distracted, and that part of her personality is helpful to her game, Nilsson said. But focus while in the “Play Box” is something May’s working on with her Vision 54 guides. Forgiveness and acceptance in the “Memory Box” after a shot is struck is also something May’s working on. All of these are new “skills” May is learning.

“When I first started working with May, she had all the talent in the world, all the tools in the world to do what she’s doing now, but she didn’t really understand how to play the game,” Luark said.

Nilsson and Marriott and new swing coach Gary Gilchrist are helping round out May’s education.

“The confidence grows when you go, ‘Wow, I have a plan and it’s working. I can trust this,’” Gilchrist said.

When May won at Yokohama, she still had some issues closing. When she won at Kingsmill, there were fewer. When she won at Volvik, pulling away on the back nine in a five-shot runaway, May’s peers saw what this emerging star can really do when she’s comfortable under pressure.

“I felt a little excited starting the round, but after the first nine holes, I didn’t feel anything,” May said. “I just felt like I was playing golf, playing my own game. I felt nothing.”

May is learning there is enormous power in that feeling.