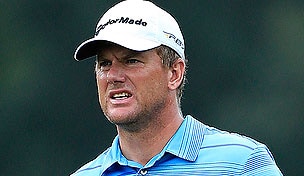 As Karlsson makes his way out of an abyss of his own making, there’s hope and motivation in seeing how Henrik Stenson is flourishing after he re-emerged twice from deep, dark places.

Karlsson shot a 6-under-par 64 Thursday to get himself into contention in the first round of the Web.com Tour Championship. He’s tied for second with Mark Anderson, a shot behind Ashley Hall. At 72nd on the Web.com Tour Finals money list, Karlsson needs a good week to win back exempt status on the PGA Tour. He probably needs a finish of T-15 or better to win back his Tour card.

At 44, Karlsson is a long way from where he imagined he would be two years ago when he took up PGA Tour membership with 11 European Tour victories, five T-8s or better in major championships and two Ryder Cup appearances on his resume.

Back in 2011, Karlsson racked up $1.7 million in PGA Tour earnings and tied for fourth at the PGA Championship. He looked headed toward bigger things.

But then the abyss opened last year, slowly swallowing Karlsson’s game until it devoured his confidence.

He lost his Tour card last year and had to go back to Q-School to get it. He lost his card again this year.

“You miss being on the stage when you see what other Swedes are doing,” Karlsson said.

Stenson won two FedEx Cup playoff events this year and claimed the FedEx Cup in a torrid late-summer run. Stenson twice worked his way out of miserable slumps in his career.

There’s hope in that for Karlsson. There was hope, too, in talking to Sergio Garcia, who struggled a few years back to rid himself of a maddening habit of constantly re-gripping his golf club over shots. Karlsson said Garcia shared with him what he did to break his habit back when Karlsson withdrew from the British Open.

“Sergio had a good point,” Karlsson said. “He said when you get into those kind of problems, what you need is time. It’s not physically difficult to break the habit, but you need time. You need time and repetition. Do we have that time in July? Can we take three or four weeks off? No. That’s what Sergio said. He said, `I just didn’t have the time, and it got worse and worse until I had to take time.’”

Something started going haywire with his pre-shot routine, worsening to the point that he was freezing over the ball, struggling to take the club back to begin his swing. Before he knew it, he had the full-swing yips.

It got so bad in his practice rounds at the 2011 British Open that he withdrew on the eve of the championship.

Karlsson left the British Open unsure what the future held.

“I didn’t want to put a foot on the golf course,” Karlsson said of his struggles.

Karlsson shut down his game. He closed quarters and re-grouped. He asked himself hard questions

“When you are where I was, you have to sit down and see first of all, 'Do I want to do this?’” Karlsson said. “It starts with a decision, then the work.”

Karlsson decided he would do the work it took to get rid of the yips.

It was no instant fix.

Karlsson took a month away from Tour events to work on a new pre-shot routine to help him take the club back without hesitation. He came back at the PGA Championship at Kiawah Island and actually got off to a strong start, getting himself in contention over the first 27 holes.

“I still had the problem getting the ball away,” Karlsson said. “When the pressure came on, I fell apart.”

Karlsson kept at it on the range, kept forcing himself to take the club away no matter how much he feared hitting a bad shot. He said it took six to eight months to finally rid himself completely of the yips.

“I don’t even think about it anymore,” he said.

Karlsson’s focus is back on ball-striking and scoring.

“If I look at the bigger picture, I’ve had a great career, but it’s not over yet,” Karlsson said. “I just want to build it up again. In the back of my mind, I definitely want to come back to play really good golf again.”

This week offers a chance to accelerate the comeback.