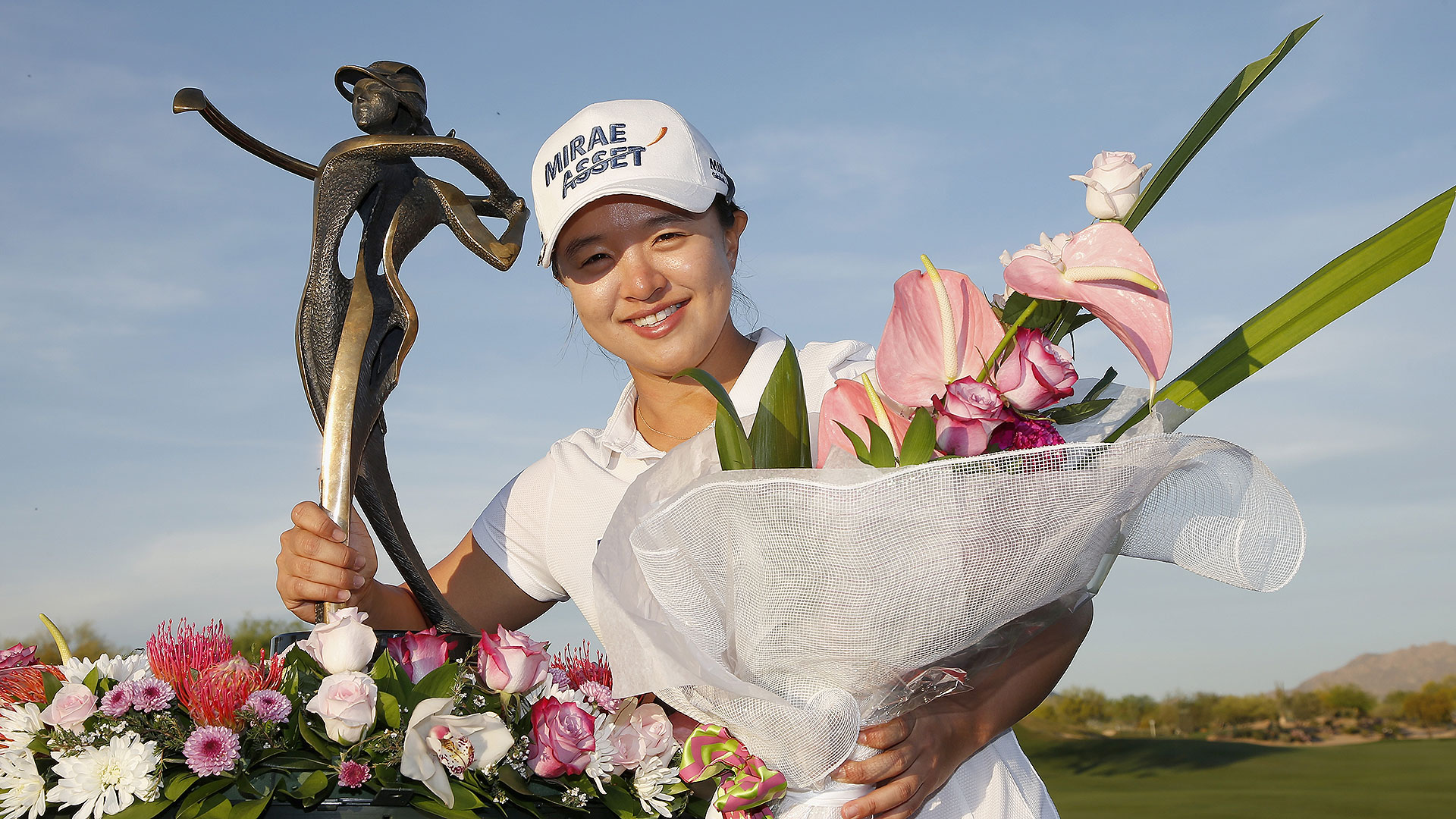 “Firework” ought to be Sei Young Kim’s theme song.

Come on and show ‘em what you’re worth

As you shoot across the sky, aye, aye

With a 10-under-par 62, Kim equaled a couple historic marks turning the final round into a five-shot runaway.

At 27-under, Kim equaled the 72-hole record Annika Sorenstam set winning the Standard Register Ping at Moon Valley Country Club in Phoenix 15 years ago. Kim’s 10-under in a final round equaled the lowest score in relation to par by a winner, tying a mark shared by Sorenstam (2006 State Farm Classic), Inbee Park (2014 Manulife) and Juli Inkster (2003 LPGA Corning Classic).

Kim, 23, who won three times as the LPGA Rookie of the Year last season, couldn’t believe what she did after checking her scorecard Sunday. She turned to her caddie, Paul Fusco, to make sense of the numbers.

Kim had an 18-foot birdie chance at the last to break the LPGA’s 72-hole and final-round scoring records, but her putt missed left.

“She put on a phenomenal performance,” said Jacqui Concolino, who played alongside Kim. “She deserved it.”

Kim started the day one shot behind Eun-Hee Ji but Kim didn’t take long to seize control. She grabbed the outright lead with a birdie at the fourth and never looked back. Lydia Ko started the day three shots off the lead, closed with a 65 and still finished second, five shots back.

While Kim might have surprised herself making eight birdies and an eagle in Sunday’s bogey-free finish, the fireworks show didn’t surprise her caddie. Fusco saw just how spectacular this big-hitting player can be at only 5-feet-3. He was alongside Kim when she beat Inbee Park in jaw-dropping fashion at the Lotte Championship early last year. Kim hit her tee shot in the water at the end of regulation in Hawaii, took a drop and chipped in for an all-word par to force a playoff with Park. And then Kim holed out with an 8-iron from 154 yards for eagle to beat Park on the first sudden-death playoff hole.

“When she’s on, anything can happen,” Fusco said. “She’s really capable of amazing things.

From 241 yards out, Kim’s 5-wood never left the flagstick, sailing straight at the hole, where it gently bounded in, stopping 3 feet away.

The tournament was pretty much over when Kim cleaned up the eagle putt. She was six shots up there.

Fusco said it took some discipline not getting caught up watching the terrific shot making. Kim hit her tee shot at the 16th to 3 feet again for the birdie that got her to 27 under.

“She’s a joy to watch and work for, because she’s such a good person,” Fusco said. “When she’s comfortable like she was today, she’s capable of some great things.”

Count Sorenstam among those impressed by the show Kim put on.

“Congratulations to Sei Young on her outstanding play this week,” Sorenstam told LPGA media from Tahoe, Nev. “I thought she was going to make that last putt. It’s hard to believe it’s only her second year on tour.”

Kim said Sorenstam was one of her idols growing up. She said she even read a book by Sorenstam.

Kim led maybe the strongest LPGA rookie class in history last year. There doesn’t look like there’s going to be a sophomore slump this season. In fact, those second-year players look like they’re ready to take over. Ha Na Jang, part of that Korean rookie wave a year ago, has won twice already this year. In fact, Koreans have won four of the first six LPGA events.

Nobody’s taking Olympic golf more seriously than the Korean women with the competition so intense to make the team. Kim said the big Olympic push might be what’s behind the Koreans making such a fast start.

Seven of the top 12 players in the Rolex Women’s World Rankings are South Koreans. Only the top four can make the Olympic team. With her victory, Kim will jump from No. 7 to No. 5 in the world rankings, which will make her the second highest ranked Korean behind Park. Jang is holding down the third Olympic spot and Amy Yang the fourth.

“They’re all going to have their foot hard on the pedal all the way through the U.S. Women’s Open,” Fusco said.

That’s the last qualifying event before the Olympic teams are finalized on July 11.

Look for other Koreans to answer what Kim and Jang have already done.