Ko comes up short in Oz, yet impresses us with maturity 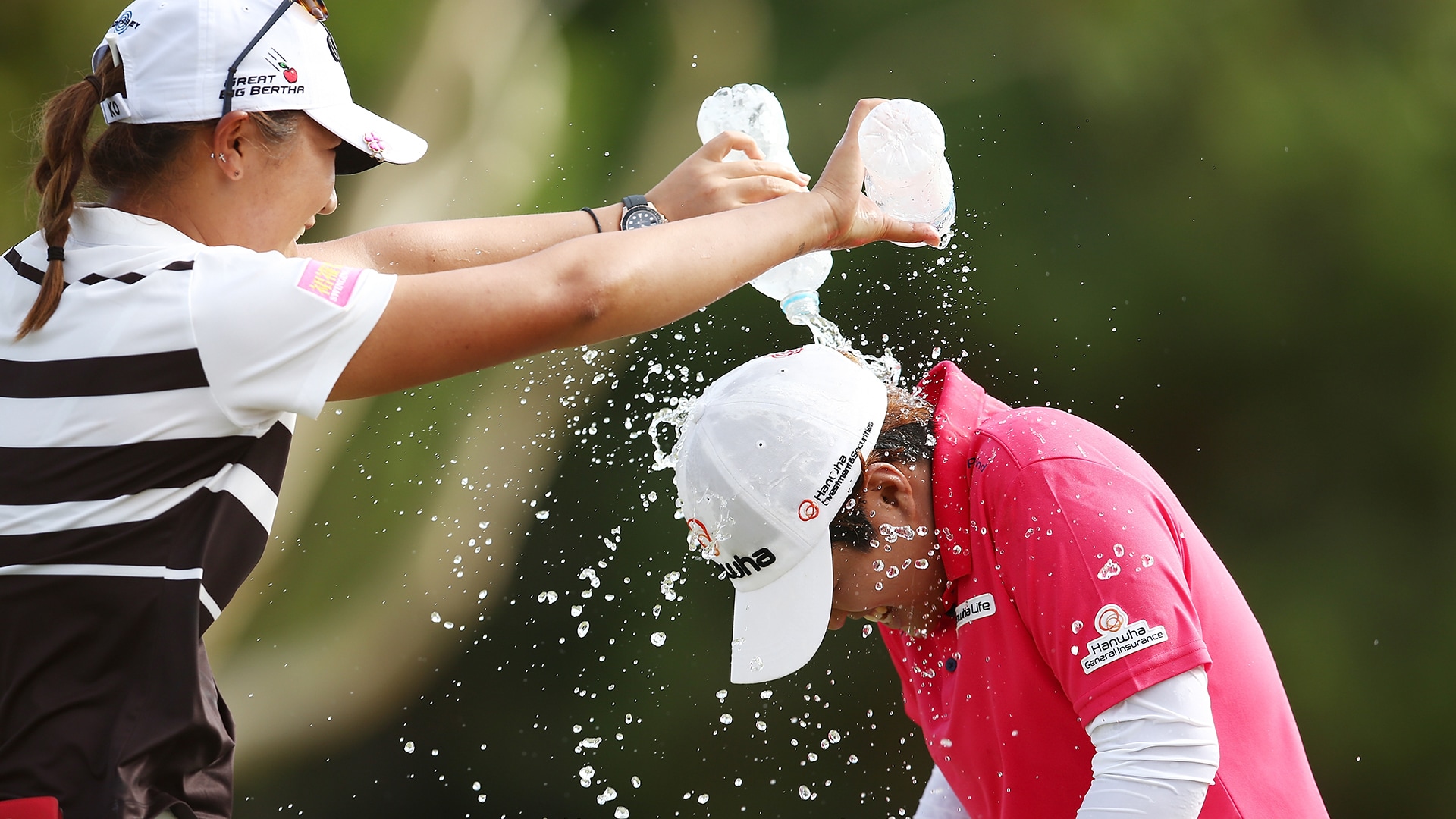 Lydia Ko showed us yet again Sunday in Australia what makes her so special.

Though Ko closed strong with a 5-under-par 67, she couldn’t catch Japan’s Haru Nomura, who won her first LPGA title in her 72nd tour start. Ko’s 67 was so good on the tough Grange Golf Club track that only one other player posted a better score in the final round. That was Nomura with a 65.

There was no shame in the Rolex world No. 1 falling short. There was no disconcerting stumble like there was in her LPGA season opener in Ocala, Fla., where Ko had a share of the 54-hole lead and collapsed in the middle of her round.

Still, Ko wowed us in the end.

Ko wowed us with the way she conducted herself in the aftermath of that loss.

After throwing nearly everything she had at Nomura, Ko didn’t stomp away from the scoring area in frustration. She didn’t pause to wipe away a tear or indulge herself with a good pout or sulk before marching home with her team.

No, Ko hustled back out to the 18th green to help Nomura celebrate.

If you were watching Nomura putt out at the 18th, you saw a gang of players racing onto the green to douse Nomura with soda, champagne, water or whatever they all had in the traditional victory shower players get on tour. You saw Ko out there among them, chasing Nomura around with two bottles of water in giddy, childlike delight.

“My goal was to shoot 67 today, and I shot 67,” Ko said. “I fell a couple of shots behind, and, you know, I felt like I played really solidly. Obviously, it’s not the best finish, you know, finishing with a bogey, but other than that, I played really well. But Haru played even better. The roars I could hear, she seemed like she was holing a lot of putts. When another player does that, it’s really out of my hands.”

Remember back to the Coates Golf Championship two weeks ago? When Ko made three consecutive bogeys and then a double bogey in the middle of the final round to fall behind Ha Na Jang? Do you remember what Jang said about the way Ko handled that disappointment as her playing partner? Jang said Ko began cheering her on to her first LPGA title.

“They were encouraging each other,” Jang’s coach, Kevin Kim, said.

After winning last week’s New Zealand Women’s Open, Ko donated all her winnings to New Zealand in gratitude for the support she received growing up there.

Ko may be the Rolex world No. 1, besieged with requests for her time, but she takes the time to hand write thank-you notes to her pro-am playing partners. At the start of last season, Ko left giant Kiwi chocolate bars in the lockers of all her peers as thanks for treating her so well during her rookie season. She handwrote notes to go with each chocolate bar.

Though just 18, Ko has the rare ability to step back and see the bigger picture more quickly than most players. She regularly talks about a responsibility she feels toward the game that goes beyond giving her best effort inside the ropes.

“One of my favorite things is when a junior comes up to me at an event, or on social media, and says, 'You're my role model,’” Ko said at the end of last year. “That's one of the biggest things that inspires me and makes me feel like I have to be better for them. If I can play a part in maybe making the tour a little bit better, it's a job well done.”

We’ve heard Ko say that more than once, and more importantly, we’ve seen that she means it.

At the Coates Golf Championship, I asked Stacy Lewis if it was frustrating chasing a world No. 1 who is so likeable and so humble. Lewis conceded it was, and that she wished Ko would “own up to how good” she really is. Frankly, Lewis’ answer got totally misconstrued. If you were standing there listening to Lewis’ entire answer, you sensed Lewis marveling over how Ko has to believe supremely in herself and yet betrays none of it any arrogant way.

And for folks who like to say “You show me a good loser, and I’ll show you a loser,” Ko blows up that thinking, just like Jack Nicklaus blew it up.

Why is it important for athletes to talk to the media after difficult losses? Athletes shouldn’t be forced to speak with the threat of fines. If they don’t want to speak, that’s fine, but the ones who do speak show us that they are seeing the bigger picture of what’s important to their sport, what serves the greater good of a game that has given them so many opportunities. They’re showing us they understand the game is not all about them, even when they’re hurting. By explaining what went wrong with their effort, or what they saw going right with their opponent, by filling in pieces of the bigger story of a hard-fought game, they’re adding to the value of the competition. They’re adding to the value of what devoted fans experience when they invest their time following a sport. They’re going above and beyond in living up to any pledges they’ve ever made about giving back to the game.

Yes, sometimes players need extra time gathering themselves after a loss before speaking. That’s understandable. But sometimes a player sees the need to rush out of scoring and honor an opponent with a good victory celebration soaking.

In victory or defeat, Ko routinely honors the game she loves with a level of maturity that ought to make us all marvel.