Ko-Henderson could turn into historic rivalry 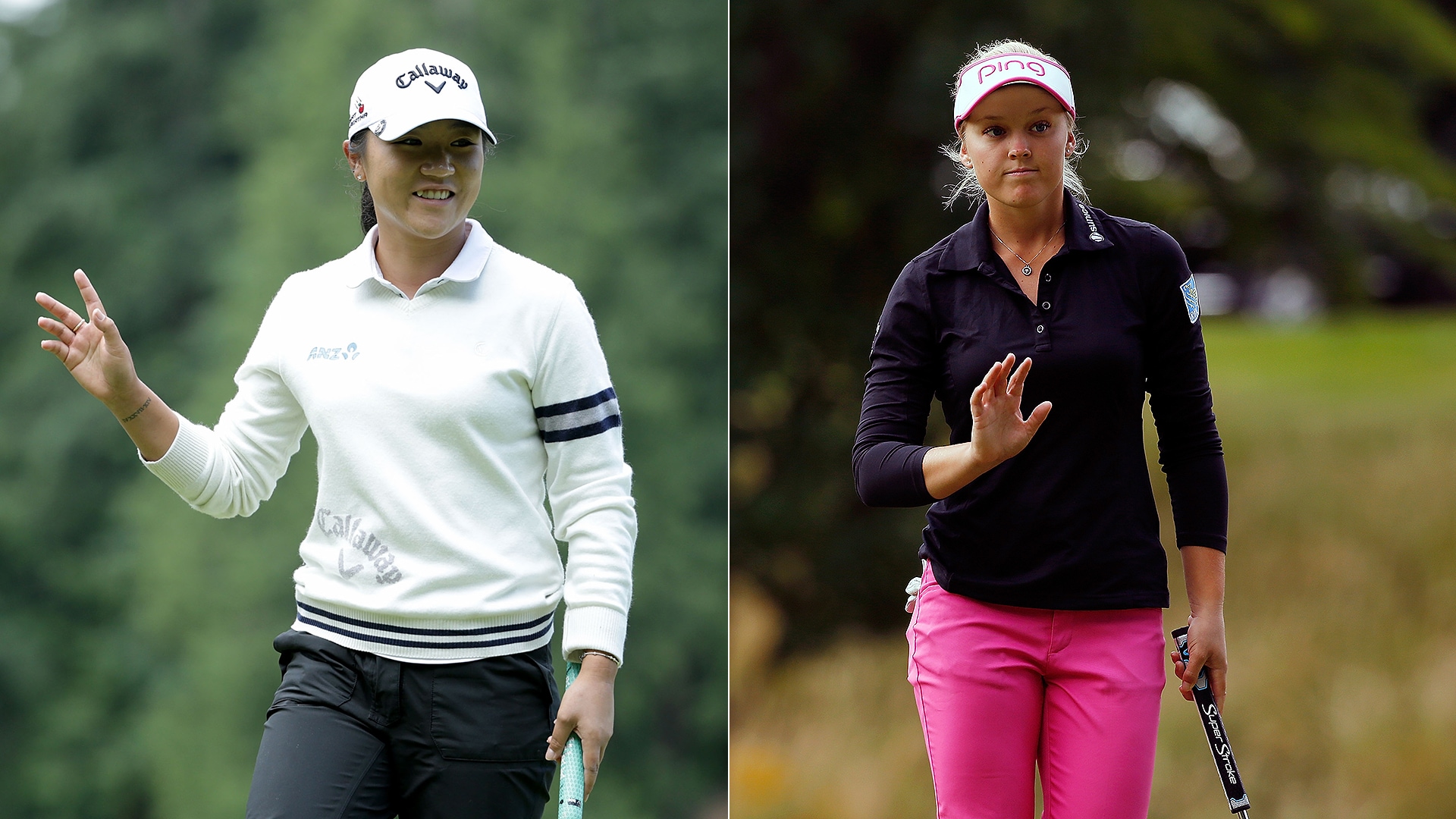 SAN MARTIN, Calif. – It’s tempting to expect too much too fast in their budding rivalry, but . . .

Lydia Ko and Brooke Henderson are delivering more than golf fans can fairly expect faster than they can ask for it.

They’re delivering great moments earlier than any players in the history of the game.

Ko became the youngest owner of a major championship title when she won the Evian Championship last fall at 18 years, 4 months and 20 days old. Henderson became the second youngest winner when she took the title at the KPMG Women’s PGA Championship last month at 18 years, 9 months and 2 days old. If either wins the U.S. Women’s Open this week to keep the teenager sweep of this year’s majors going, she will be the youngest winner in the history of this championship.

“I always say things are going so much faster than I would ever have dreamed or imagined,” Ko said.

Together, Ko and Henderson delivered one of the greatest finishes in the history of the women’s game when Henderson chased down Ko at the Women’s PGA and then beat her in a playoff.

So now that Ko is No. 1 in the Rolex Women’s World Rankings and Henderson is No. 2, are they ready to begin delivering women’s golf its best rivalry since Annika Sorenstam and Karrie Webb began battling for the game’s biggest prizes back in the ‘90s?

Are Ko and Henderson good enough together to reprise their Women’s PGA Championship duel at CordeValle Golf Club this week?

Though they are grouped together with Lexi Thompson in the first two rounds this week, neither is biting on projecting anything beyond the first tee shot that awaits them Thursday morning.

“I'm definitely a lot more confident coming into this week at World No. 2 and knowing that I've won a major championship,” Henderson said. “But that doesn't really mean anything when I tee it up on Thursday. I have to have two solid rounds to make the cut, and then to climb up the leaderboard on the weekend.”

Yes, it’s too early to begin calling Ko and Henderson rivals, but the show they put on at the Women’s PGA makes for a nice foundation to launch one. Of course, these things can’t be forced or manufactured. They evolve with intensifying competition for the game’s biggest prizes.

Ko’s record is already so impressive, with 13 LPGA titles before her 20th birthday, two of them majors. Henderson seems in a hurry to catch up. Her victory at the Cambia Portland Classic last weekend was her third LPGA title. She turns 19 in September.

Henderson was asked if she looks at Ko as a rival.

“Lydia is an inspiration to all of us girls out here, and I think everyone in the world, basically,” Henderson said. “She has done amazing things in her career and she's only a couple months older than I am. We're just trying to kind of chase after her. She showed us a lot of things that are possible.

“She will always have a lot of respect from me, but that doesn't mean I don't want to beat her. That doesn't mean I don't want to go out there and have four solid rounds of golf. And I hope we do have a lot of playoffs together for Major Championship wins, like we did a couple of weeks ago, that means I'm playing really well and that means she's playing really well. So that's what I'm kind of hoping for.”

Henderson is making her fourth start in a U.S. Women’s Open. She tied for 10th two years ago and tied for fifth last year.

Ko is making her fifth start in a U.S. Women’s Open. Her tie for 12th last year was her best finish in the event.

What does Ko think of Henderson?

“Brooke is a really great player,” Ko said. “We all know what an amazing talent she has. But the thing is that she has such great personality and she's super nice. That's why we always love watching somebody like her play well. And our age gap, we were both born in 1997, so it's not like I'm miles older than she is.

“She’s an aggressive player, but at the same time she's smart. I think she's one of the most confident putters out there, too.”

Henderson, who jumped to No. 2 in the world with her victory at Sahalee, is still almost six whopping points behind Ko in the world ranking average. She won’t be overtaking Ko for No. 1 even with a victory this week. Nobody’s going to be overtaking Ko anytime soon, but Ko knows she’s the target.

“I don't necessarily think about it when I'm out there practicing, thinking, `Hey, I need to hit one more ball to beat Brooke,’” Ko said. “At the end of the day, all I can do is try my best, work on my own golf. And I think that's all you can do.”

If golf’s fortunate, Ko and Henderson will be asked a lot about each other in the coming years.