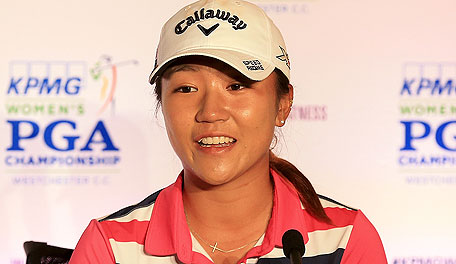 David Leadbetter likes seeing that as her swing coach, but he also looks for other telltale signs she’s ready for the game’s biggest events.

“She’s smiling and laughing,” Leadbetter said with Ko preparing for Thursday’s start of the U.S. Women’s Open. “She’s feeling rested, and she’s feeling good about her game. When she’s that way, she normally plays well.”

With one of the most well-rounded games in women’s golf, Ko enters this week among the favorites to win. SkyBet has Inbee Park as the favorite at 13/2 with Ko and Stacy Lewis each at 11/1.

Though Ko just turned 18 in April, there’s rich anticipation every time she tees it up in a major championship. There’s also heightened pressure to make that first victory in a major historic. She’s already the youngest player to win an LPGA event. She has three chances left this summer to become the youngest winner of a major, to eclipse the mark Morgan Pressel set when she won the Kraft Nabisco at 18 years, 10 months and 9 days old.

Though it seems excessive loading that expectation on Ko, Leadbetter understands the fuss. She’s the most accomplished teen phenom ever to play the game.

“What’s the next step for Lydia?” Leadbetter said. “It’s to win majors. It’s brought up at every press conference she has. She knows it. I think she’s gotten a little too hyped up for the last two majors, and she’s trying to be more low key this week. A lot’s expected of her. I think she’s saying, `I’m just going to make this week like it’s a regular tournament,’ instead of getting bent out of shape about it.”

Ko is off to another big year with three worldwide victories. She’s having a year just about any woman but Inbee Park would trade for, but Ko hasn’t been at her best in this year’s majors. She tied for 51st at the ANA Inspiration and missed the cut at the KPMG Women’s PGA Championship. Those are her worst performances this season. She saw her record-tying streak of 29 consecutive rounds under par end at ANA, and she missed her first cut ever in an LPGA event at the Women’s PGA last month.

“She’s just too good. She has a perfect game for the majors, and there’s no reason it can’t happen this week.”

Leadbetter deals with pressure, too. And he hears criticism with Ko missing the cut at the Women’s PGA. There was some over-the-top worry in social media circles when Ko went four consecutive events without a top-15 finish before tying for sixth in her last start at the Walmart NW Arkansas Championship.

Ko closed out Walmart with a 63.

“I didn't play well the last couple of weeks [before that], but it was great to finish with a low score on Sunday in Arkansas,” Ko said. “That gave me a lot of confidence coming into this week. And I know that I'm hitting the ball good, that I can be confident and just trust my game.”

Ko’s record since taking up with Leadbetter and his assistant, Sean Hogan, has been terrific. Since making the move 18 months ago, she has won six times. She also moved to Rolex world No. 1 under their watchful eyes, reigning there for 19 weeks. She’s No. 2 today.

Predictably, Ko’s sluggish month launched questions about whether Leadbetter should have changed her favored ball flight from a fade to a draw.

“Look, you’re always going to get that,” Leadbetter said. “She hasn’t played to her normal standard for a month, and all of a sudden you start hearing she’s in a slump and her swing isn’t working. They cut Phil Mickelson more slack than they allow her.

“The changes have actually been subtle, and she’s hitting the ball probably 15-20 yards farther than she was a year ago. That’s a big plus in today’s game. She’s not short now. She’s sort of medium long now where before she was medium at best. The changes we made were so she could draw the ball. Look, she’s not a big girl, so left to right isn’t going to maximize her distance.”

Ko came to Leadbetter and Hogan with a shut face at the top of her swing. They changed her to a more neutral grip to get her square at the top. It’s allowed her to hit the consistent draw she wanted and to gain the extra distance she wanted, but her miss has become a hard, pulling draw to the left.

“With the right to left, there’s a tendency, at times, where the club can drop beneath the plane and she can get too much of a draw shape, but overall I would say the benefits far outweigh the negatives,” Leadbetter said. “She’s happy with the draw, and the swing looks great.”

Ko leads the LPGA in hitting greens in regulation this season.

“There are always naysayers,” Leadbetter said. “That’s the way it is in the world. So, hey, you know what? I don’t really care what other people think. I care what she thinks and about the results. And the results have been pretty darn good since we started working together.”

Ko takes it all in with an equanimity belying her youth.

Ko could make this Sunday more than a good day. She could make a historic day.