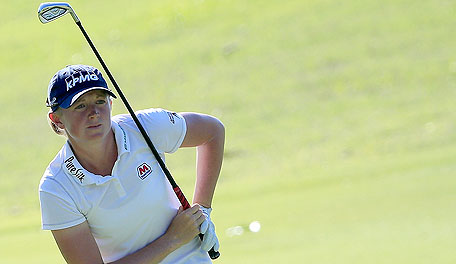 Choi spoiled a big party for the Razorback nation at the Walmart NW Arkansas Championship, too.

With Lewis poised to end a year-long victory drought, Choi stole the closing moments. Choi did so with a pair of unforgettable 8-irons in front of thousands of Lewis’ fans in the shadow of the University of Arkansas, where Lewis played collegiately and is still beloved.

With a one-shot lead at the 17th tee, Lewis looked like she was going to close out her first victory since winning in front of all her fans in this event at Pinnacle Country Club a year ago. Lewis stuck her approach to 6 feet, sending a roar through the large grandstand there. She looked totally in charge, but in dizzying fashion Choi quickly changed everything.

Playing behind Lewis, Choi holed out from 145 yards with an 8-iron for eagle at the 16th.

“I thought it was going to be good, but I didn't expect it would go in,” Choi said. “Unfortunately, I couldn't see the ball going in. I just heard a lot of screaming around the green.”

Up ahead, Lewis suddenly needed to make her short birdie chance to tie Choi, but Lewis missed.

The turn of events was jarring. Instead of walking off the 17th two shots ahead, Lewis was one shot down.

And then Choi turned up the heat some more with Lewis leaving the 17th. Choi stepped up to the tee there and plucked her 8-iron from her bag again. And she nearly holed out with it again, leaving her tee shot from 148 yards inches short. She tapped in for birdie to take a two-shot lead.

“My putting was, like, not good,” said Choi, who took 33 putts in the final round. “I realized I could win without putting.”

Lewis didn’t know Choi had holed out at the 16th, but when she was playing the 18th tee she learned she was two behind and needed an eagle. After splitting that last fairway, Lewis didn’t go for the green with her second shot. She laid up.

“I knew I needed to make eagle there and just didn’t quite get the drive down there to do that,” Lewis said. “We had about 212 yards to carry the bunker, and I just felt with that wind off the lie I couldn't get it over the bunker. I could get it on the front right part of the green, but it didn't really do me any good. I thought the best opportunity to do something was to lay up.”

After laying up, Lewis missed the 18th green. She pulled a wedge into a bunker. She made bogey from there, finishing three shots back and tied for third.

Lewis has had so many close calls since winning the Walmart NW Arkansas Championship a year ago. She has finished second five times. She lost in a playoff to Brittany Lincicome back in April in the year’s first major championship, the ANA Inspiration. She lost a dramatic duel to Hyo Joo Kim at the Founders Cup in March.

“When somebody holes out, it's one of those things that it's kind of meant to be,” Lewis said.

It has been a year of almosts for Lewis. She left Arkansas trying to make the best of almost winning again.

“It's tough, but, honestly, it's been a few weeks since I've been in this position, a few months, really, so you can't be too upset,” Lewis said.