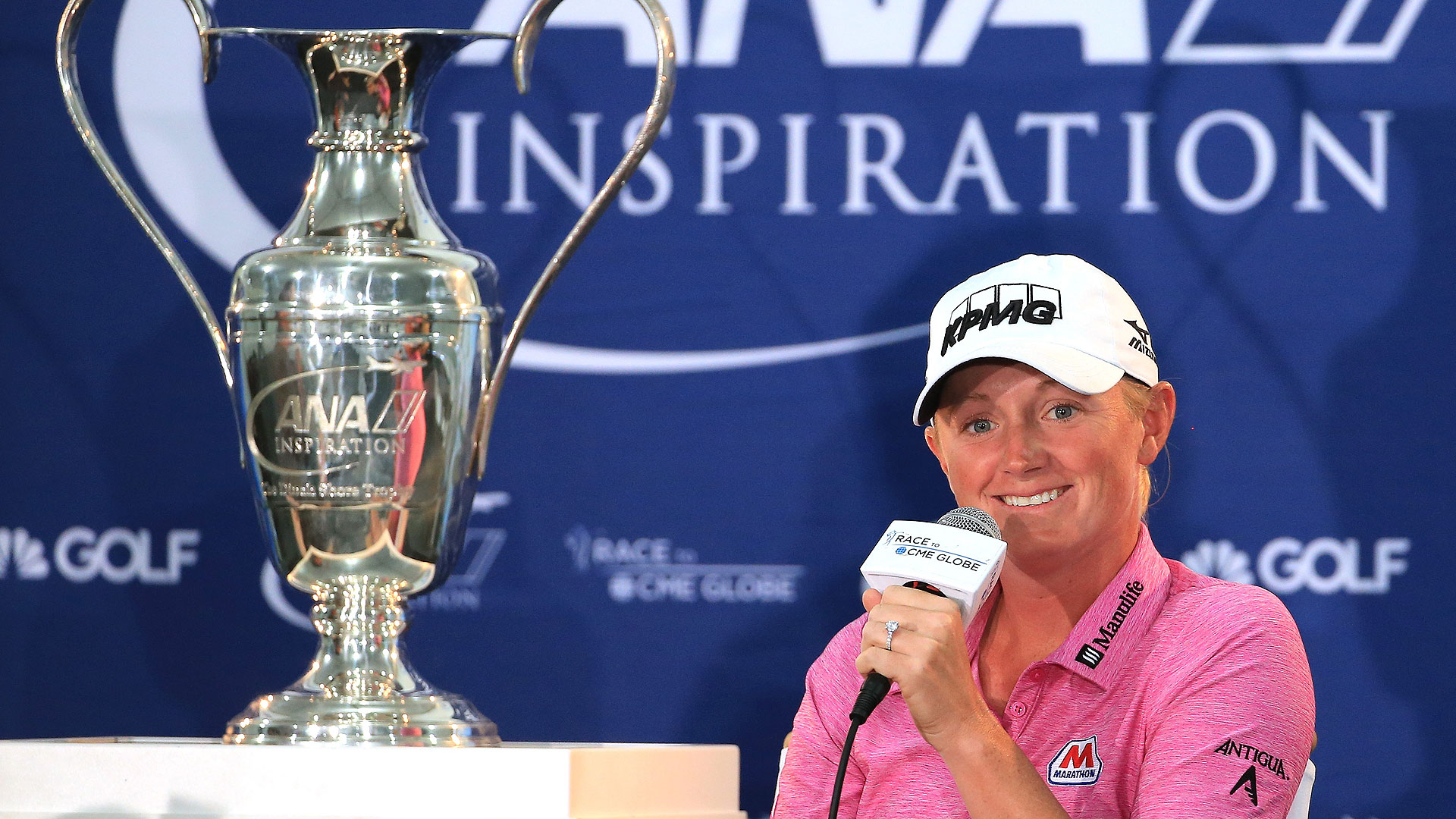 There’s so much coming over the next six months in women’s golf, especially for Lewis, so long the earnest face of the American game. There are so many life-changing crossroads ahead this summer, both on and off the course for Lewis, one of the toughest competitors in the game. The tears were revealing in how much the game’s emotional landscape is already changing as this steely-faced competitor works out her path to September.

This week’s ANA Inspiration marks the start of an intense stretch the likes of which the LPGA has never witnessed. There are seven major events crammed into the next six months. There are five major championships, plus the Olympics and the UL International Crown.

A player could change her life, the way she’s remembered, getting hot in this run.

Lewis’ life promises to change in monumental ways no matter what scores she posts.

Lewis, 31, is getting married in early August, just before the Olympics and the Evian Championship, the year’s final major.

She’ll be planning a wedding amid this intense six-month run.

That’s revealing in how Lewis’ life and priorities are changing in ways she couldn’t have imagined just a year ago. She sold her house in South Florida earlier this year and bought a home back in Houston, where she will make her future with Gerrod Chadwell, her fiancé. He’s the coach for the University of Houston women’s golf team.

It’s daunting stuff for this hard-nosed competitor and former Rolex world No. 1.

“I've got a new addition to my life that has kind of changed my perspective on golf and everything, really,” Lewis said. “So there's going to be some adjustment time, and I'm still trying to figure it out. It's going to take a little time.”

There is head-spinning change to sort out for this 11-time LPGA winner and two-time major championship winner.

Gazing one way, Lewis looks ahead, eager to build her new life with Chadwell. Gazing another, she looks back, trying to make sense of how she can be so committed and yet rack up nine second-place finishes since she last won two years ago.

As Lewis finds contentment in her personal life, she still wrestles trying to find it in her professional life. She wants peace inside the ropes, too.

Lewis knows the rap on her, that she looks tortured too much when she’s playing. She joked about how her switch to a “Happy Putter” two weeks ago was received.

“I’ve gotten a lot of grief for that,” Lewis said.

Lewis loves the game, the way it challenges her, and so these perceptions disappoint.

“Don’t always judge a book by its cover,” Lewis said. “I wear my emotions on my sleeve. You can tell what I'm feeling probably 99 percent of the time, and that's something that's hard for me. Maybe I don't look that happy out there, but maybe I'm actually enjoying it. And maybe there's something else going on in that person's life that is affecting what they're doing on the golf course.”

Lewis said she may have to re-evaluate how much trying to be No. 1 still matters to her.

“It's not necessarily the goal – being No. 1 – like it used to be, because I know what it takes and what goes into that,” Lewis said. “You have to play a lot of tournaments. You have to travel a lot. You have to play around the world. It's a lot of sacrifice to be No. 1 in the world. And that's what I learned being in that position. Right now, that's not necessarily a goal of mine, because I have goals off the golf course that are more important, sometimes.

“Right now, I want to win majors and contend in majors, and that's my focus.”

But, again, Lewis is still working this all out.

Lewis says she looks back at the big picture of her career, seeing how she emerged from spinal surgery and a back brace coming out of high school, and she is overwhelmed. Doctors weren’t sure if she would ever play again before they fixed a rod and five screws into her backbone as a remedy for scoliosis, and yet she went on to become the first American in 20 years to sweep the LPGA’s Rolex Player of the Year Award, the Vare Trophy and the money title. And yet too often, Lewis says, her focus is on what isn’t working in her game.

And that’s another thing Lewis is working on changing.

“I think it's just because of the expectations I've already set,” Lewis said. “It's because of the things I've accomplished, that you set these high expectations for yourself, and, sometimes, you need to put them in perspective. That’s what I'm trying to do.

This is part of the challenge Lewis seeks in finding the kind of peace inside the ropes that she’s finding outside.

“I have other things in life, which is a good thing for me,” Lewis said. “It's a great thing, because golf has been my life for five or six years. I love it that I have something else to go home to and to be excited about. It's just it's an exciting time in my life, and it's caused some adjustments on the golf course.”

It has caused Lewis to rethink how this new life of hers should work.