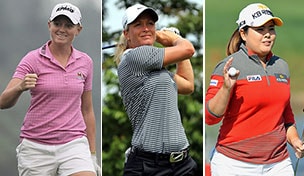 For so long, womens golf was defined by a single, dominant player.

Really, for almost a dozen years after the turn of this century, you could name one overwhelming force in the womens game, the one player who reigned superior over everyone else.

From Annika Sorenstam to Karrie Webb to Lorena Ochoa and then to Yani Tseng, there were long runs where nobody could touch these players.

Yes, Sorenstam and Webb were equals for a part of their runs, the last real rivals in the womens game. There was a time near the turn of this century where they were the Big Two in womens golf. They didnt just separate themselves from the rest of the game. They pushed each other to new heights.

We just might be getting back to that dynamic in the womens game.

With Suzann Pettersen making a run this week at winning the Sunrise LPGA Taiwan Championship, womens golf is watching three players of this era separate themselves from everyone else. Were watching them push each other to new heights as a trio.

Call them the Big Three.

Inbee Park, Pettersen and Stacy Lewis have dominated this LPGA season, and theyre currently ranked Nos. 1-2-3 in the world, respectively.

Park, of course, is enjoying one of the greatest years in LPGA history, a season in which she won the first three majors, a feat equaled only by Babe Zaharias way back in 1950.

Normally, that ought to seal a players spot as the Rolex world No. 1, as Player of the Year and the leading money winner.

In fact, Park might sweep all those honors, but its not a lock quite yet with four events left this season.

If Pettersen wins this week, the Big Three will have combined to win more than half of all the LPGA events played this year. They will have won 13 of the 25 played so far.

Parks won those six, Pettersen will have won four and Lewis three.

Notably, they seem to be answering each other.

Early in the year, Lewis won the HSBC Womens Champions and RR Donnelley LPGA Founders Cup in back-to-back starts to take the Rolex No. 1 ranking from Tseng.

Park responded with her run of three majors, securing the No. 1 ranking along the way.

A defining moment among the trio seemed to arrive at the U.S. Womens Open at the end of June. Park, Pettersen and Lewis were all paired together in the first two rounds at Sebonack Golf Club. Park, though, didnt just go on to win the championship. She blew away her nearest rivals. In their first two rounds playing together, Park beat Pettersen by a cumulative 19 shots and Lewis by 12.

That appeared to rile up Pettersen and Lewis, because they had spirited answers in the second half.

Lewis went on to win the next major, the Ricoh Womens British Open.

Pettersen went on to win the last major, the Evian Championship. Pettersen is still on fire. Since getting thrashed by Park at the U.S. Womens Open, here are Pettersens finishes: T-6, T-4, T-7, Win, Win, T-3, T-3.

Park has one top-10 finish since Sebonack.

After the U.S. Women's Open, Park topped the Rolex Womens World Rankings with 13.27 average points. Pettersen was No. 3 with 7.92. Now, Pettersen is within less than a point. If she wins this week, Pettersen will pull to within .66 points of overtaking Park. Its possible Park could end this remarkable year without the No. 1 ranking.

Clearly, that thrashing at Sebonack motivated Pettersen. She learned there that she had to become a better putter to stay with Park, the games best putter.

That was almost a wake-up call for me, Pettersen said after winning at Evian. I had to see where the hurdle was. I had to look at my game. It was a question of being honest. I couldnt lie. For me, it was definitely the putting. Its been a part Ive been trying to improve, and its nice when it pays off that quickly.

Suzann has changed her practice regimen to where shes spending a lot more time on her putting, Leadbetter said. She never really had a regimen for her putting. It was always a sort of secondary thing.

Just last month, Lewis and Park both talked about the effect theyve had on each other this year.

Since last year, Ive always watched Stacys score after I finish my round, Park said. She has been somebody that I have always thought had the game to be No. 1. She is a good ball striker. I really try to learn from her, what she is doing good. I think she is such a nice person outside the golf course, too. I think having somebody like that definitely helps your game to improve.

Lewis said: I watched Yani a lot when she was in her run. We seemed to play a lot together, so I learned a lot playing with Yani and what she was doing. Now, youre kind of doing the same with Inbee. Were making each other better. Were pushing each other to work harder. I think its great for both of us ... I do watch her scores. I watch what shes doing. I watch how shes preparing. I think you can learn a lot by watching people when they are playing their best.

Pettersen is playing in Taiwan this week with Park and Lewis both taking the week off. Lewis is scheduled to play the Mizuno Classic in Japan next week with Pettersen and Park both off. All three are expected to tee it up in the final two events of the year, the Lorena Ochoa Invitational and CME Group Titleholders. The Big Three seem poised to make the last month of the season compelling.