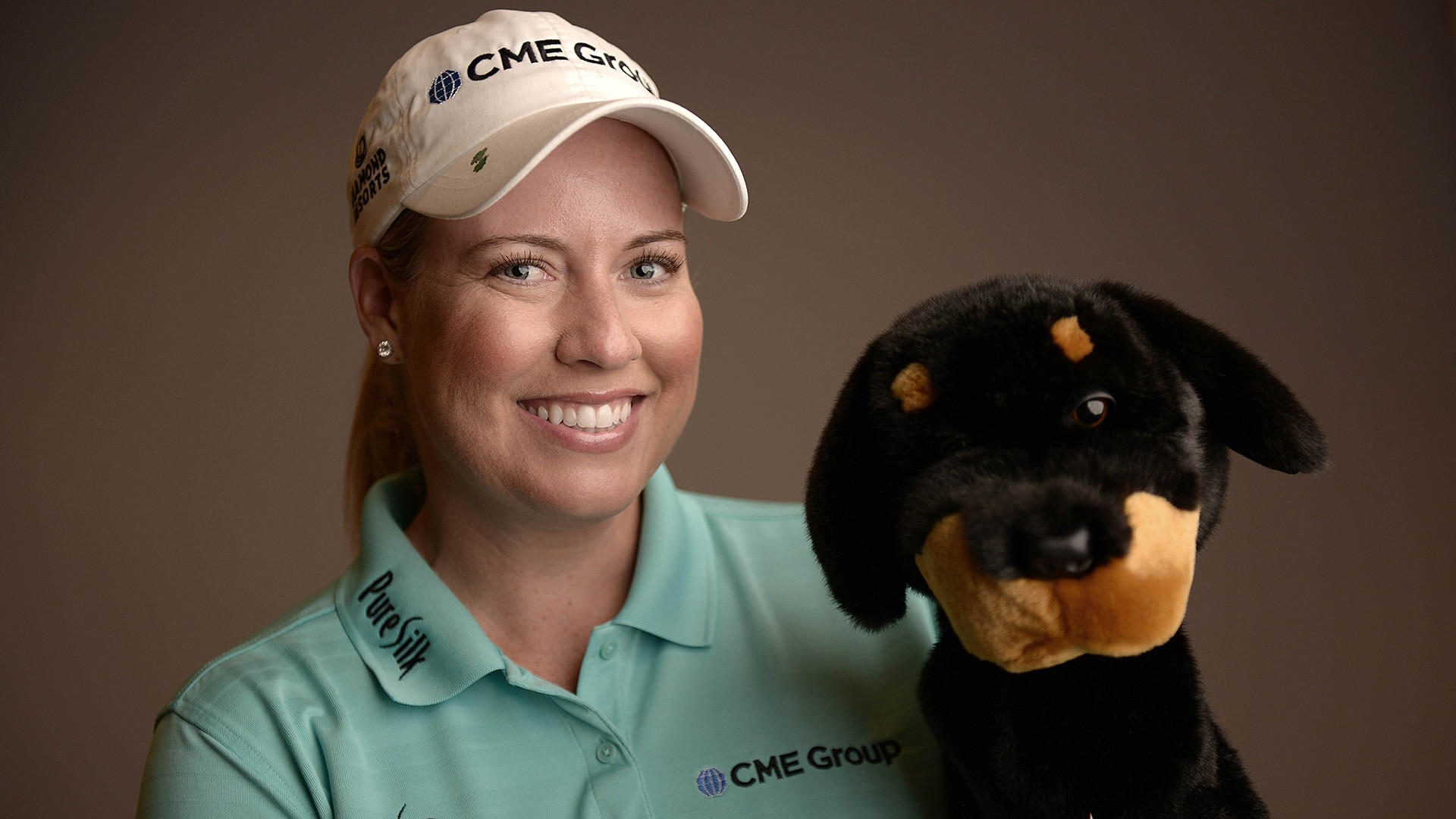 RANCHO MIRAGE, Calif. – There is something almost gravity defying about Brittany Lincicome’s game.

It isn’t in the way her golf ball challenges Newton’s Law, soaring higher and farther than most of her peers. It’s in the way she breaks so unapologetically from the sport’s slavish conventions.

Lincicome is back at Mission Hills this week to defend her title at the ANA Inspiration. She’s an American original in the women’s game.

At 30 now, Lincicome isn’t ruled by the ambition that fills driving ranges from sun up until sun down at LPGA events.

She isn’t driven to be the best player in the game.

She doesn’t aspire to be No. 1, to break records or make it to the Hall of Fame.

Lincicome isn’t daring to be great.

She’s daring to be happy in a profession that makes so many of her colleagues miserable.

As cheery and agreeable as Lincicome always seems to be, she’s a rebel this way.

Lincicome confesses crimes against the player code that you won’t hear any other player not named Laura Davies confess. Lincicome doesn’t have a coach. She hasn’t had a lesson in at least three years, maybe four. She unabashedly admits to loving her naps and hating to practice. She doesn’t spend much time on the practice range. Mostly, when she’s there, she’s warming up to play, because that’s what she loves. She loves to play.

If Lincicome is going to be anywhere from sun up to sun down, it’s on her boat, fishing in the Gulf of Mexico near her St. Petersburg home. She has a 24-foot Sheaffer fishing boat designed to her personal specifications.

She named it “Taking Relief.”

What’s her idea of a perfect day? It’s a day with her newlywed husband, Dewald Gouws. Though he’s also in the game as a professional long driver, her perfect day isn’t spent on a golf course with him, though they play a lot together.

“My sponsors hate me saying this, but it’s a day of fishing,” Lincicome said. “It’s getting up with the sun, getting on the boat, getting your bait and heading out. When the water’s dead calm, it’s so much more fun. You can see for miles, and the things you see, turtles, dolphins, stingray, manta rays ...

“I like catching goliath groupers. We have a spot where we usually go, about 13 miles out, over a sunken tug boat. The goliath groupers can range from 100 pounds to 700 pounds. A guide once told me they’re like reeling in a Volkswagen beetle with its doors open.”

The largest goliath grouper Lincicome has ever caught?

The major championships Lincicome has won in her career are her goliath groupers of golf. She also won the ANA Inspiration back in 2009, when it was the Kraft Nabisco.

Lincicome said there was “validation” winning her second major, but she says she did not set out in her career burning to win one. She doesn’t look back overly disappointed that she didn’t win a third major in that playoff loss to Inbee Park at the LPGA Championship two seasons ago. Instead, she looks back delighted that she played this game she loves so well that somebody handed her six LPGA trophies at the end of tournaments.

“I can’t think that losing a tournament would ever be devastating to my career,” Lincicome said. “I can’t think of losing something that would ruin a number of years for me.

“When I was growing up playing, I thought it would be cool just to be on the driving range with Annika Sorenstam, Juli Inkster and Lorena Ochoa. When I turned pro, I didn’t even know if I would be able to keep my card, but I’ve been blessed to have kept my card every year I’ve been out here, knock on wood. I’ve been blessed to win six times. I think I’ve accomplished a lot. Six wins is pretty good.”

Yeah, Lincicome knows the wrath she invites from people who wonder what she might achieve if she pushed herself harder. She isn’t immune to the criticism. She admits she has wondered, too.

“To be like Lydia Ko or Stacy Lewis, always finishing in the top 10, to always be in contention, I’ve wondered where my balance should be,” Lincicome said. “Do I need to practice more? Would that help me? Or would it hurt me?”

What Lincicome has learned is that she’s miserable when she grinds away, looking for perfection in her swing. She says her game gets worse. That’s not to say she doesn’t work at her game. She does in practice rounds, but she’s not a technical player, and she doesn’t think a lot about technique. She isn’t on Track Man looking at her numbers and she doesn’t break down video looking at what positions she’s getting her club into. She’s a feel player, and Lincicome feels she's at her best when she’s fresh.

“It’s important as a player that you understand what works for you,” Gouws said. “Britt realizes when she’s putting in too much time, she gets frustrated with the game. She plays her best when it’s still a game for her, when she finds her happy place. I promise you, when Britt is excited about playing golf, she’s going to play good golf.”

When something’s awry with Lincicome’s swing, she’ll ask Pederson and Gouws about it and then go to work on it in a practice round.

“She’s such a phenom, and that’s enough for her,” Gouws said. “She has figured out what works for her.”

Lincicome is a rebel in today’s game, a mutineer who plays golf for fun, an insurrectionist unbound and untethered by social gravity’s pull.

“I’m sure people have told Brittany that she needs to practice more, but she hasn’t changed who she is, and I think that’s pretty cool,” said Angela Stanford, who has watched Lincicome grow since joining the tour as a rookie. “She just keeps doing her thing. She believes in what she’s doing, how she should go about things. I think if she were out there grinding all the time, she would be miserable.”

Lincicome is nicknamed “Bam Bam” for her power, but Stanford marvels at how well rounded her game is.

“She is an amazing talent,” Stanford said. “She obviously bombs it, but the thing I’ve always said about Bam is how great her hands are. Around the green, I’ve seen her hit chip shots where I’m thinking, `How does a girl who can bomb it like she does hit shots so soft?’ And her putting. I enjoyed being her Solheim Cup partner because you know she’s going to make a putt.”

Lincicome sees the game as just that. It’s a game. It’s’ one dimension of her larger life.

“If you dedicate your whole life to golf, you can wake up when you’re 50 and have nothing else,” Lincicome said. “You can find you don’t have a family, and you haven’t really lived your life. That would be a big regret for me. I don’t want to have those regrets.”

That’s why meeting Gouws three years ago was such an important turn in Lincicome’s life. She went to Mesquite, Nev., to cheer for her friend, Trevor Consavage, in a long drive competition.

Sitting in the bleachers, paging through a program, Lincicome wondered aloud to a friend how the brackets worked. Seated a couple rows in front of Lincicome, Gouws offered his help. He was also in the competition.

“I thought he was cute, and he had really big muscles,” Lincicome said.

After the competition, Lincicome and Gouws met again at a casino bar where all the competitors hung out. Gouws, a South African with little knowledge of the LPGA, had no idea who Lincicome was or that she was a major champion. When Lincicome briefly stepped away, another friend of Gouws began raving about what a great LPGA player she was.

“We don’t get to see much LPGA on TV in South Africa, but my friend kept going on and on about her,” Gouws said. “I told him I don’t really care, she’s just a really a cute blonde I’m enjoying having a conversation with, but he wouldn’t stop.”

Gouws asked his friend if he would shut up if he walked over and asked Lincicome to autograph his chest.

“I was joking,” Gouws said.

But moments later, somebody handed Gouws a Sharpie. So, he walked over to Lincicome and asked if she would sign his chest. 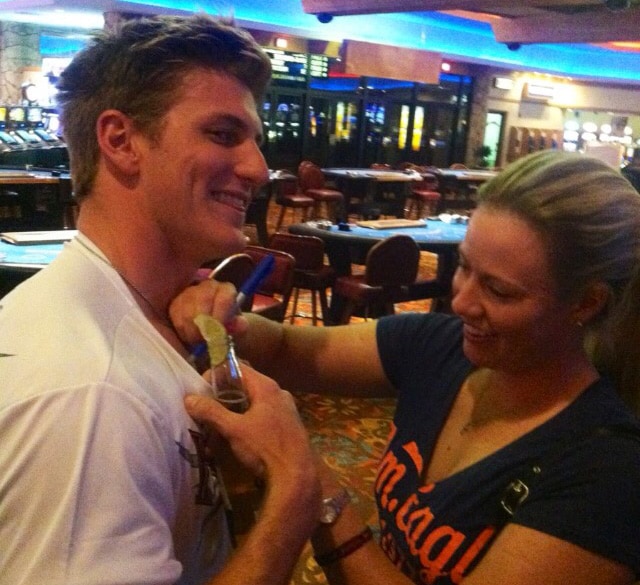 “I thought he was going to take his whole shirt off, so I was kind of disappointed when he only pulled down the front of his shirt,” Lincicome said.

Lincicome and Gouws didn’t stop talking for two hours, and they stayed in contact by cell phone, texts and emails when Gouws returned to his South African home. Three months after they met, Consavage booked a trip to South Africa to see Gouws and begged Lincicome to join him.

“I’m like `Are you crazy? My dad will never let me fly to South Africa to see a boy I’d just met,’” Lincicome said.

But Lincicome did go, and Gouws gave her and Consavage the grand tour of his homeland. He took them on safari, where they played with lion cubs and survived a scary charge by a bull elephant. They toured Cape Town and the wineries of the region. Their romance really began there, leading to their marriage in December.

“We watched our wedding for the first time on video the other day,” Gouws said. “I asked her if she knew how incredible our story is, how we are from different parts of the world but we were able to meet the way we did. Who would have thought?”

Lincicome doesn’t hide the fuller life she seeks with “D,” her pet name for Gouws, and how, once again, golf isn’t what comes first in this broader life she craves. She wants to be a mother.

“I would love to have a family tomorrow,” Lincicome says. “Write that, and I’ll tell ‘D’ to read it.

“I understand we just got married, and we need to focus on us a little bit before we start a family, but I’ve already been asking a million questions to the moms on tour, what it’s like raising a family out here, how traveling can be like a circus. I’d love to be at home, doing nothing when we start a family, but I realize I will probably be playing with a family, that I’ll probably need to work a couple more years before retiring.”

And remember what Gouws said. When his wife’s happy, she plays her best. So there shouldn’t be any counting her out of winning more majors, even with children in tow. After all, Lincicome doesn’t need as much practice as most players.