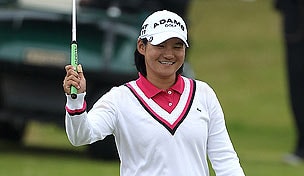 Getty Images
BIRMINGHAM, AL - MAY 14: Former basketball star Charles Barkley (L) walks off the first tee with Andy Bean during the Thursday Pro-AM of the Regions Charity Classic at the Robert Trent Jones Golf Trail at Ross Bridge on May 14, 2009 in Birmingham, Alabama. (Photo by Dave Martin/Getty Images)  -

Look for a proven champion to win the LPGA’s season opener in Australia this week.

Royal Melbourne is one of the world’s best tests of golf, and it rarely yields to the unproven.

The LPGA makes a notable start to its 2012 season with a strong field teeing it up at the ISPS Handa Women’s Australian Open.

Rolex world No. 1 Yani Tseng is looking to win this championship for the third consecutive year. She got her season off to a torrid start a year ago, winning the first four times she teed it up. No. 2 Suzann Pettersen, No. 4 Cristie Kerr, No. 7 Jiyai Shin, No. 9 Brittany Lincicome and No. 10 Stacy Lewis also are in this week’s field.

Lexi Thompson, the 16-year-old who last year became the youngest winner of an LPGA event, and the youngest professional winner of a Ladies European Tour event, will make her LPGA rookie debut this week.

Hall of Famer Karrie Webb, a four-time winner of the Women’s Australian Open, will be a crowd favorite there. Webb would love to add her name to the title a fifth time, especially with Royal Melbourne hosting its first women’s professional event.

“It’s a huge deal,” Webb told GolfChannel.com in an email. “To my knowledge, a women’s event has never been played on the Composite Course. I don’t think we ever get enough opportunities to play the great courses around the world.”

“I think Royal Melbourne represents what Australian golf is all about,” Webb said. “I think it’s a great combination of American courses and British links courses with its own personality.

“It’s a course that has its own naturally designed defense, but, with the ever-changing Melbourne weather, can create a brutal test of golf.”

Built in Australia’s sand belt, Royal Melbourne’s composite course is made up of 12 holes from its West Course and six from its East Course. Alister MacKenzie, who designed Augusta National, directed the design of the West Course. The routing is virtually the same as what the men played during the last Presidents Cup, with some minor variations.

Early reports out of Australia this week describe Royal Melbourne’s famed greens as having a brownish, purple hue, but tournament officials say the women won’t face the same brutal setup the men faced at the Presidents Cup in November. The green speeds are reported to be running 11.5 on the stimpmeter this week. They were measured at 14 during the Presidents Cup.

The wind can be a large factor in outcomes at Royal Melbourne.

“It’s been awhile since I was there, and the course has been re-done since then,” Webb said. “I know the greens are very undulating, and, depending on the speed of them, will take a lot of imagination and trust to putt well on them.”

Webb played her first Australian Amateur at Royal Melbourne in 1991, though not on the composite course. She played another amateur event there in '93. She said she didn't fare well in either.

The LPGA is co-sanctioning this week’s event with the Australian Ladies Professional Golf Association. The field of 156 players includes 100 LPGA pros. It’s the first LPGA event in Australia in more than a decade. The LPGA turns to its early Asian swing next week.

“It’s a huge deal for the growth of women’s golf in Australia, that the LPGA have an event here again,” Webb said. “It’s great for the young girls just turning pro, or the elite amateurs to see where they stack up talent-wise, but it’s also important to raise the profile and have young girls take up the game.”