With Masters looming, Woods searching for his game 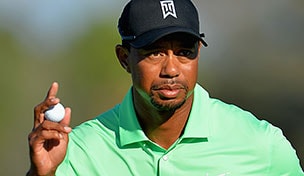 Getty Images
Jordan Spieth of the United States plays his second shot on the par five 18th hole during the first round of the Abu Dhabi HSBC Golf Championship at the Abu Dhabi Golf Club on January 21, 2016 in Abu Dhabi, United Arab Emirates. (Photo by Ross Kinnaird/Getty Images)  -

The confused look he wore standing with his hands on his hips in the eighth fairway Friday at the Honda Classic pretty much summed up his day, a struggle just to make the cut.

In fact, it pretty much summed up the most lackluster start in his 19 seasons as a pro.

After ballooning a wedge short into the eighth green, Woods looked down at his divot in exasperation. He stared at it for the longest time, studying it the way a forensic scientist might examine a key detail in a crime scene.

And then he moved behind the divot, studying it from another angle. He stalked a lot of his divots like that, like a CSI investigator looking for clues to a missing golf swing.

Given how many errant shots clearly frustrated him in the second round, Woods posted a fairly impressive 1-under-par 69. He fought to get the ball in the hole, fought to get to even par overall, fought to make the cut on the number.

His short game saved him time and time again. He chipped in for a birdie at the 13th, a shot that might have saved his weekend.

“The short game was spotty, and now it’s good again,” Woods said. “So now, just need my ball striking to come around.”

Woods is 41st in the field in fairways hit this week. He’s 90th in greens in regulation. He hit just one of the first eight greens he looked at while spraying shots across the back nine.

“It was a grind, there's no doubt about it,” Woods said. “I certainly grinded my way around this place today. I didn't hit it very good. Just one of those days where I fought out a number, which was good.”

How frustrating was his struggle?

As Woods made his way up PGA National’s ninth fairway, the legion of fans hustling after him weren’t rooting for him to catch Rory McIlroy, who at that time loomed 12 shots ahead of Woods. They were rooting for him to make the cut.

“Come on Tiger, we want to see you on the weekend!” one fan exhorted.

Woods made birdie there, with his young children, Sam and Charlie, watching at the back of the ninth green. His girlfriend, Olympic skier Lindsey Vonn, looked after them.

This is a home game for Woods, with his residence just down the road on Jupiter Island, but he isn’t looking comfortable here. Still, he won’t dismiss his chances to win this weekend, even though he has to make up 11 shots on McIlroy over the final two rounds.

“Anything can happen this weekend,” Woods said in his typical refrain.

Mostly, though, this weekend has to be about Woods getting his game right for the Masters, with the year’s first major just six weeks away.

He was all over the place here. He hooked a tee shot at the fourth under a sawgrass bush, and he blocked a tee shot so far right at the 11th, he had to punch back into the fairway.

And then he hooked his tee shot at the 12th into trouble, and Woods fanned his approach short and right at the 14th.

The sluggishness in Woods missing the Saturday cut at Torrey Pines, and then tying for 41st in Dubai, made this week feel important. Even Woods said the turn to the Florida swing heightens preparation for the Masters.

“It’s only three events,” Woods said when asked about the cool start to his year. “So, not that many rounds into it.”

Woods isn’t ready for the Masters, but he doesn’t have to be, not yet. He has this weekend, and then two starts at places where he’s comfortable. He goes to Trump Doral next week and then the Arnold Palmer Invitational two weeks after it.

If he's still in CSI mode at Bay Hill, it will be time for Tiger fans to fret.