McIlroy focused on the finish line 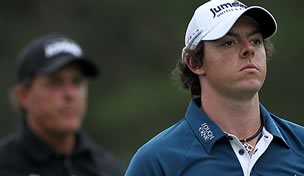 Rory McIlroy’s resilient spirit came through in his major championship return Thursday at the U.S. Open.

It came through in the way he attacked Congressional Country Club with impunity, in the way he split fairways, knocked down flagsticks and holed one putt after another.

It came through in a 6-under-par 65 that’s good for a three-shot lead.

It especially came through in the way he made the memory of his collapse at the Masters two months ago seem like ancient history.

“I don’t know if it says I have a short memory,” McIlroy said. “But I took the experience from Augusta, and I learned a lot from it.”

What did he learn?

“Mostly, just from the Sunday, just being so tentative and trying to keep ahead of the field instead of playing a free-flowing game like I usually do,” McIlroy said. “Going back to Augusta, the first three days, I played smartly but aggressively to my targets. And then going into Sunday, I started to play defensively, and that’s when things can go wrong.”

McIlroy attacked Congressional in such effortless fashion he made playing the U.S. Open look easy.

“The game is easy when you hit it straight and make every putt,” Phil Mickelson said.

Watching McIlroy march down the middle of fairways while Mickelson and Dustin Johnson struggled in the same grouping made McIlroy’s surgical precision all that more impressive. Mickelson was all over the place, scrambling to a 74. Johnson was just as wild with a 75.

As sharp as McIlroy looked, he isn’t taking anything for granted. He isn’t assuming anything. At 22, he’s learned first-round success guarantees nothing. He led or shared the lead in the first three rounds of The Masters this year before unraveling with that closing 80. He also led the British Open at St. Andrews with a 63 after the first round last summer before stumbling to an 80 in the second round.

“I know more than anyone else that a good start is nice, but there’s such a long way to go,” McIlroy said.

If McIlroy’s swing remains as sharp as it was in the first round, it won’t seem so long to the finish line. He looked unbeatable. He hit 17 of 18 greens in regulation. He didn’t make a bogey.

His Masters collapse aside, McIlroy’s showing an impressive ability to attack in majors. The kid can go seriously low.

With his swing honed Thursday, McIlroy found himself as far from the memory of his Masters’ collapse as you could get in this first round. He was actually thinking about breaking major championship records. He was thinking about shooting the first 62 in a major.

“I played really good [at St. Andrews], had a real chance of shooting the lowest round ever in a major,” McIlroy said. “I felt as if today I had a chance to do that as well. It did slip into my mind.”

Back at the Memorial two weeks ago, McIlroy got some inspiration from Jack Nicklaus, who cornered McIlroy after the pre-tournament clinic there.

“He said he would kick my backside,” McIlroy said.

Of course, it was playful banter, and McIlroy got into the spirit of it after his good play Thursday.

“Yeah, he didn’t really threaten to beat me up,” McIlroy said. “But I think I could take him now. He’s a little old.”

As McIlroy said, there’s a long way to go, but this lad from Northern Ireland is showing he’s got a game that’s special under major championship conditions. The question remains whether it’s ready for a special final round, whether it’s ready to win his first major.

“He said to me, `I’m expecting big things from you,’” McIlroy said.

We’re all waiting to see if McIlroy delivers something large on Sunday.