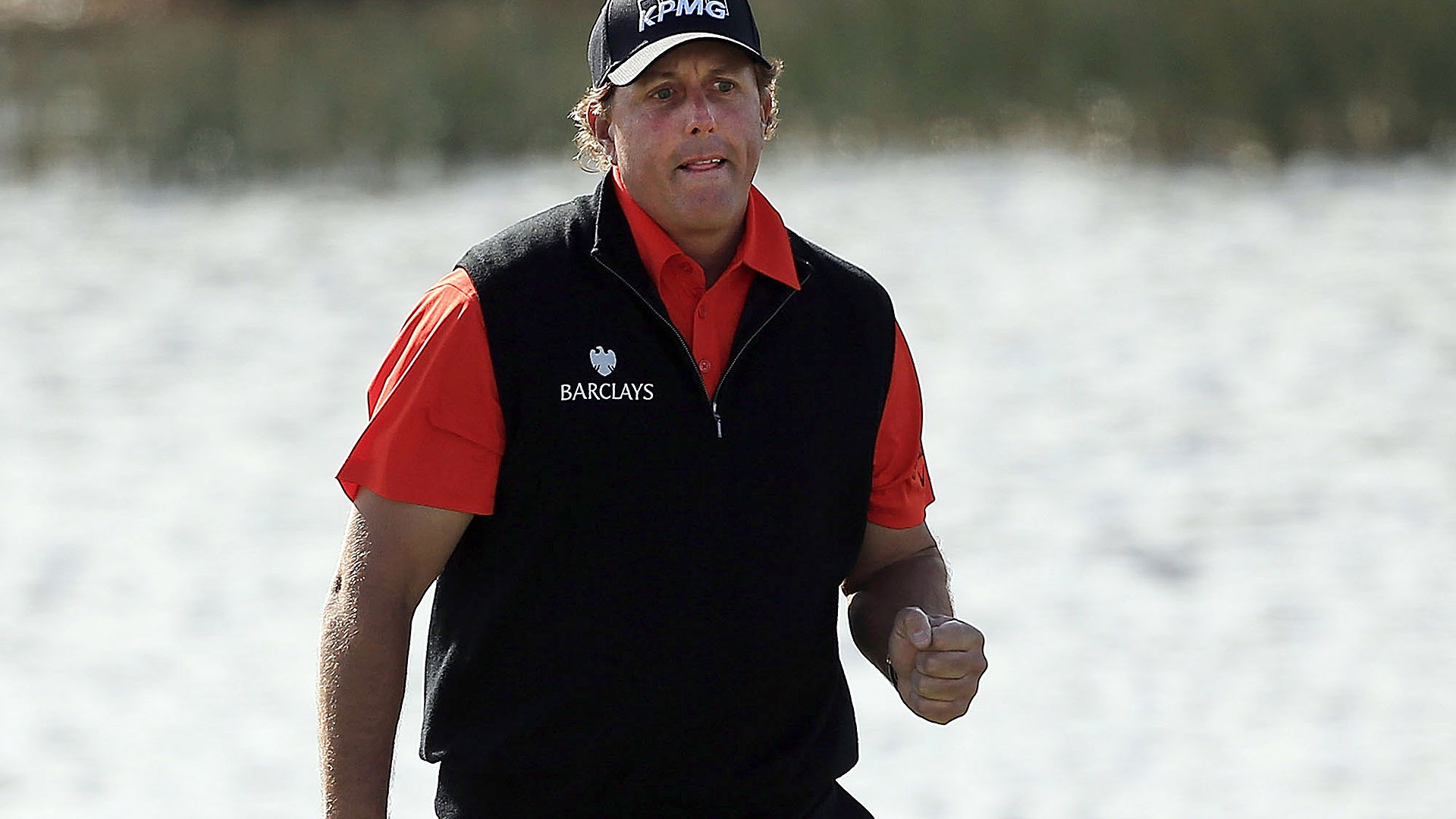 Flagsticks were doing the rumba.

It was blowing hard enough to ground the Egyptian geese huddling down in the grass on the Champion Course.

The wind was blowing shots and even putts off course, but it couldn’t blow the smile off Phil Mickelson’s face.

With a 1-under-par 69, Mickelson made a solid start in tough conditions. He was T-5 when he walked out of scoring near the end of the morning wave. More than anything, Mickelson was pleased with the way his new swing changes held up in all the crosswinds.

“It’s been really fun for me to come out and play, because I know that I’m going to strike it well,” Mickelson said.

There was no faking it around the Champion Course in the opening round. With winds ripping up to 20 mph, any flaws in a player’s ball-striking were going to be exposed. That’s the big test Honda offers Mickelson this week. These changes Mickelson is working on with his new swing coach, Andrew Getson, are going to be tested more than they’ve been tested in any other event this year.

“It was very, very challenging,” Mickelson said. “I felt very confident working it into the wind and did it a number of times today. The ball-striking took a lot of pressure off my short game. To keep it around par, it was a good first day.”

Mickelson walked away from the AT&T Pebble Beach Pro-Am disappointed with a second place finish after missing a 5-foot putt at the last that could have sent him into a playoff, but he left eager for another opportunity. This new swing has him convinced he’ll be giving himself a lot more chances to end a winless spell that dates back to the summer of 2013.

“I just can’t wait to get back out there tomorrow, because I know I can get it back under par,” Mickelson said. “I’m having a lot of fun playing right now, because I’m starting to play with ease and hit some shots that I’m trying to hit.”

Mickelson hit 7 of 14 fairways and 13 greens in regulation on Thursday but never got himself in all the trouble lurking at PGA National. With his birdie at 18, his ninth hole of the day, he grabbed sole possession of the lead. His putter failed him at the second hole, where he missed a 4-footer for par, and again at the sixth, where he three putted.

“The crosswinds actually push [a putt] an inch or two,” Mickelson said.

While it’s difficult to imagine Mickelson, 45, playing without confidence, even through his last 34 starts without a victory, there has been angst over his swing. A lot of it, he confesses.

“The last year or two, I would show up at a course, and I was just trying to find something,” Mickelson said. “I would be out on the course, and I didn’t know which way the miss was going to be. It could be left. It could be right. It caused a lot of frustration knowing that I’m able to hit these shots but not pulling them off. Caused a lot of anxiety.

“Now I show up to the course, and I’m very relaxed. I’m calm and fairly confident, because I’m able to hit a number of really good shots, and then the ones I miss a little bit, I’m able to control and know which way I’m going to miss. And it’s usually OK.”

Ball-striking gets a supreme test at PGA National, where there is so much trouble, so many forced carries over water. Padraig Harrington, the defending champ here, said the Champion Course is like a major championship test.

“It’s a really good test, because it forces you to work it back into the wind on certain shots,” Mickelson said.

The winds were up with the sun and Mickelson’s early tee time Thursday, and he was ready for the challenge.

“He opened up at 7:45 with two of the purest shots I’ve seen him hit, to the 10th, that was playing so long,” said Adam Scott, one of Mickelson’s playing partners. “He made a lovely 3 and that set the tone for the day.”

After driving it 305 yards through a crosswind with his opening tee shot, Mickelson carved a 4-iron into the wind to 10 feet to set up his birdie. It was one of only six birdies in the first round on that difficult 508-yard par 4.

Like Mickelson, Scott once worked with Butch Harmon. Scott was asked if Mickelson’s switch to Getson surprised him.

“Nothing surprises me in this game,” Scott said. “Generally, if you look at anyone, these relationships have a lifespan out here. You get the best out of each other when you’re meeting at the same point. Often, that changes with caddies or coaches or trainers or psychologists or anyone else. I know it was a very successful relationship they had. It’s just the way it is out here. Obviously, they felt like they needed a different direction.”

Mickelson will be looking to refresh himself with a victory come Sunday.