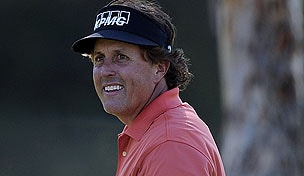 Getty Images
SPRINGFIELD, IL - JUNE 04: Natalie Gulbis talks with Michelle Wie as they walk up to the 16th hole during the first round of the LPGA State Farm Classic golf tournament at Panther Creek Country Club on June 4, 2009 in Springfield, Illinois. (Photo by Christian Petersen/Getty Images)  -

LOS ANGELES – They like spectacular final scenes here in the shadow of Tinseltown.

With the end of Act One nearing at the Northern Trust Open at Riviera, he brought down the house on a course that stars such as Douglas Fairbanks, Humphrey Bogart and Gregory Peck once called home.

With the sun sinking fast Thursday, Mickelson holed a 35-foot chip for birdie from behind the 18th green to finish off a round of 5-under-par 66. The shot was dramatically timed, giving Mickelson sole possession of the lead in the suspended first round.

It’s like Mickelson picked up right where he left off after winning in spectacular fashion Sunday at Pebble Beach.

His confidence is soaring. You can see it in his eyes. You can hear it in his voice.

“To carry the momentum over from Sunday felt really good,” Mickelson said. “Now we have a lot of golf to play on a really challenging golf course, and I’m going to have to stay really focused, but I feel like I’m playing well.”

You wouldn’t have thought the dwindling crowd at day’s end could make so much noise around the 18th green, but they let out a giant roar when Mickelson holed out.

“It wasn’t one I was really trying to make,” Mickelson said. “It was quick. It was downhill. I had to play about 4 or 5 feet of break, so it’s not one that you’re trying to get aggressive with. I was trying to get good speed and let it feed with the break, and I got fortunate that it went in.”

The birdie moved Mickelson a shot ahead of J.B. Holmes and Hunter Mahan, two ahead of Jonathan Byrd and Carl Pettersson. Sergio Garcia’s in a pack just three back, Luke Donald just four back.

“I don’t want to think too much about Phil because he’s a stud of a player,” Mahan said.

Mickelson opened the season struggling at the Humana Challenge, Farmers Insurance Open and Waste Management Phoenix Open, but he’s on fire now. Over his last 50 holes, he has made 15 birdies, one eagle and just one bogey.

“I felt very confident at the start of the year because I had played eight to 10 rounds exactly like Sunday’s final round at Pebble,” Mickelson said. “I was so amped up and ready to start the season that I came out and played three terrible tournaments. I don’t know what happened there, and my confidence took a little bit of a hit.

“To come back and play the way I played Sunday when I needed it most at Pebble, it gets my confidence right back to where I was starting the season. I’m excited, especially heading into our biggest event in April.”

That would be the Masters, where Mickelson will be looking to win a fourth green jacket.

That last roar Mickelson conjured echoed across Riviera and all of golf.

“Phil is a great player,” Mahan said. “But it’s too early to kind of worry about him. Back nine on Sunday maybe you can. If it’s me and him down the stretch, I might worry about it more.”