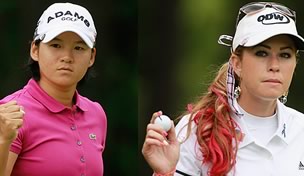 Yani Tseng appears to know what it’s like to win everything except the U.S. Women’s Open.

Creamer tees it up Thursday at The Broadmoor East Course looking to become the first American to win back-to-back U.S. Women’s Opens since Betsy King in 1989 and ’90.

Tseng’s tees it up there looking to complete the career grand slam.

There’s lots of desire, confidence and motivation in these two players and the fun of it is that they will be playing the first two rounds together at the U.S. Women’s Open. The duo is matched with U.S. Women’s Amateur champion Danielle Kang in a marquee grouping off Thursday at 3:36 p.m. ET.

“I love these types of pairings,” said Annika Sorenstam, who won the U.S. Women’s Open at The Broadmoor in 1995 and is the chairperson of this year’s championship. “It’s just a great pairing. I’m sure they’re going to be feeding off each other a little bit. They’re both very competitive, with totally different games.

“It’s kind of the next generation. With Yani, you see the international flavor [Taiwan], and you see the American star.”

While Creamer is seeking to claim her first victory since last year’s U.S. Women’s Open, Tseng is looking to win her third consecutive LPGA start and seventh worldwide title this year. With Tseng’s reign at No. 1 in the Rolex World Rankings reaching its 21st consecutive week, she’s beginning to separate herself as the new dominant force in the women’s game.

“I think we're going to see more of her,” Sorenstam told assembled media Wednesday. “This is just a beginning. I think she's good for the face of the LPGA. Hopefully, the other players will keep up her pace, because it's going to be quite the competitive race the next few years.”

“You never think there’s going to be another Mickey Wright or another Annika Sorenstam or Lorena Ochoa, and all of a sudden, Yani comes around,” Inkster said. “Yani has Lorena’s power. I mean, she can bomb the ball. She’s got a lot of passion for the game. She wants to be the best. So, she could be here for awhile.

“If she stays healthy, she could break a lot of Annika’s records.”

There’s special motivation in that regard for Tseng, who idolizes Sorenstam and even bought Sorenstam’s former home in Orlando. The Broadmoor was home to Sorenstam’s first LPGA title, the U.S. Women’s Open in 1995.

All of this casts Creamer in an underdog role despite her defending champion status.

“You can't dwell too much about what's going on out there,” Creamer said of the Tseng pairing. “That's going to be the big key, just taking care of my own business. I've prepared a lot for this event, and I feel very good. I just have to get in my own world out there.”

Tseng and Creamer offer a classic contrast in styles.

Tseng’s a power player who can dominate when her putter’s hot.

Creamer seems designed to win U.S. Opens. She’s a straight driver with a strong iron game who hits a lot of greens in regulation.

Yes, Tseng’s still so young, but she has struggled in her four U.S. Women’s Open appearances. It’s the major that’s given her the most fits. In four starts in the championship, she’s missed the cut twice. Her tie for 10th, however, at Oakmont last year is a sign she’s figuring out how to play the toughest test in women’s golf.

“I always feel so much pressure on a U.S. Open course, it’s such a tough, tough course,” Tseng said. “I feel less pressure this week.”

Creamer knows how to dial in to U.S. Women’s Open mode. She hasn’t finished worse than a tie for sixth in her last three starts in the championship.

Who has the edge this week?

Sorenstam gives power players the edge. The Broadmoor, a big course, is playing as the longest U.S. Women’s Open in history at 7,047 yards. Even with the altitude, it plays long.

“It's more about the length and being able to hit shorter irons, higher irons into the greens to stop it,” Sorenstam said. “I think that's going to be the key.”

Creamer believes The Broadmoor – with its confounding greens, its difficult yardage calculations due to altitude and elevation changes – will create an exhausting mental challenge.

“If you lose your mind on one shot, it’s going to cost you big time,” Creamer said.

The fun of Thursday and Friday will be watching Tseng and Creamer match wits and skill to see who best positions themselves to win on the weekend.