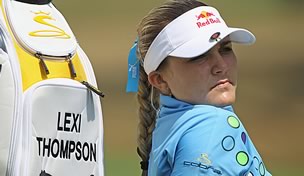 Getty Images
HUMBLE, TX - APRIL 1: Justin Rose of England watches his second shot on the 8th hole during the first round of the Shell Houston Open at Redstone Golf Club on April 1, 2010 in Humble, Texas. (Photo by Hunter Martin/Getty Images)  -

For better or worse.

News Tuesday of Whan’s decision to allow the 16-year-old phenom to try to win tour membership through qualifying school looms as large over women’s golf as the Cheyenne Mountain does over the U.S. Women’s Open this week.

By waiving the tour’s requirement that Thompson be 18 years old to be eligible for membership, Whan opens a door he was once reluctant to open.

“At the core of it, I really didn’t think I wanted to be the commissioner that created a new pathway to the LPGA that made young girls around the world think that as a freshman or sophomore in high school that they have a big decision to make,” Whan said in January. “I didn’t want to create this worldwide phenomenon where 14-year-olds are sitting in their living room and thinking, `high school or pro?’”

Well, what should those girls be thinking now?

If Thompson makes it through Q-School, she will be competing as an LPGA member next year as a junior in high school. That’s radically new terrain for this tour. It’s a radical new possibility for youth with big games and big dreams.

Aree Song, Morgan Pressel and Jessica Korda were granted waivers at age 17, but they all turned 18 shortly after. They each were finished with high school when they started playing the tour, or they were virtually finished.

Whan changed his mind about Thompson, and he might have changed the LPGA forever.

Why did he change his mind?

It’s an important question with so much at stake for Thompson and youth who want to follow this trailblazer’s path, but there were no answers coming out of the LPGA leader’s office on Tuesday. The commissioner wasn’t returning calls or doing interviews. A spokesman said Whan may make himself available Wednesday after he arrives at the U.S. Women’s Open.

Whan’s a family man with young children. It’s a good bet he wrestled with this. As a historic decision, it deserves some context, some explanation in what the commissioner might have wrestled with and why he believes this is the right thing to do. His reasons matter.

It may be that this isn’t so much a matter of the time being right for this decision, but maybe his belief in the player being right, Thompson being the right player.

Only Whan can answer that.

Thompson’s different, no doubt. She’s gifted, with a strong, supportive family. She’s proved herself in limited opportunities since turning pro at 15. She’s proved herself with her success, with a near victory at the Evian Masters last summer and a tie for 10th at the U.S. Women’s Open. She’s even proved something in her failure this year at the Avnet Classic, in the way she managed her emotions in a final-round stumble.

Thompson may very well be the exception to the LPGA rule, but what’s the rule now?

That’s the question that resonates beyond Thompson. That’s the issue, as much as Lexi’s readiness.

What follows this decision?

How do you create this new avenue for Thompson without creating a pathway strewn with the failed bids of teens attempting to follow?

That’s what Whan seemed to be struggling with last January.

Maybe that’s a pathway only Thompson is able to make work.

Whan’s decision is creating some debate within his ranks.

“I’m not a fan of it, I don’t really like it,” Kraft Nabisco champion Stacy Lewis said. “The age rule is there for a reason, and it’s a good reason, because of maturity levels. It’s the kind of thing where once you let one player in, do you have to let them all in? Obviously, Lexi’s a special case, she’s a great player for her age, but I would just hate for other kids that age, kids who need the time to mature, I would hate for them to want to follow the same track and get burned out by the time they’re 20.”

“Turning pro at 16, it’s a big step to take, but she’s been living the life out here for a year. She has a strong support network. I think she’s an exception. I don’t think you’ll see this very much.”

Juli Inkster’s never been keen on juniors making the jump to pros, but she’s softened on Thompson.

“She’s proven she belongs out here,” Inkster said. “I think it’s more a social issue than playing ability. Everybody knows she belongs, but she’s learned out here. She’s learned the ropes. She knows the players. I’m cool with that.”

Thompson is carving a new path, a potentially exciting one in what it might offer American golf, but a path opened by Whan, who will be forever linked with this path's ultimate destination.