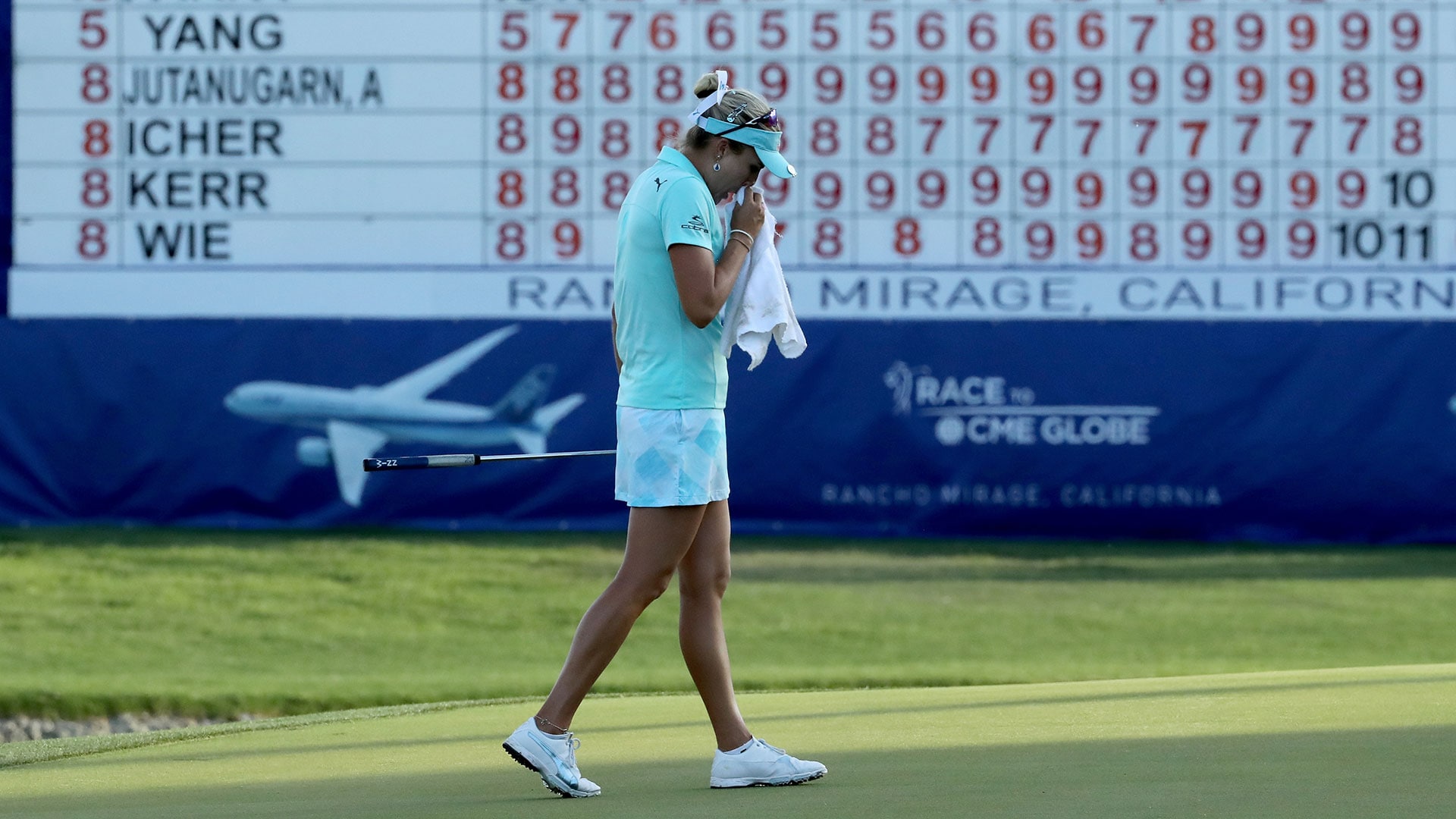 They walked away from Tuesday’s news unsure how the USGA and R&A’s new standards will be applied to rules infractions discovered via video and whether this new decision would have helped Lexi Thompson avoid the penalties that derailed her bid to win the ANA Inspiration three weeks ago.

While some LPGA pros are already referring to Decision 34-3/10 as “The Lexi Rule,” USGA and R&A leaders insist that’s not the case, that the new decision was already a work in progress. LPGA commissioner Mike Whan said the rule simply got “fast tracked” after the Thompson controversy.

Still, LPGA pros were immediately trying to figure out how the new decision would have been applied to Thompson at the ANA if it were in effect at the time.

“I don’t think it changes Lexi’s ruling at all,” Lewis said. “It probably changes Anna’s.”

That would be Anna Nordqvist.

Thompson was penalized four shots in the final round of the ANA Inspiration after a TV viewer emailed in to report a possible infraction. She was penalized two shots for incorrectly marking her ball on the 17th green on Saturday and two more for signing an incorrect scorecard after that round.

Nordqvist lost the U.S. Women’s Open in a playoff last summer after she was penalized two shots for grazing a few grains of sand taking back a 5-iron in a fairway bunker during a playoff. The violation was spotted in high definition video replay. She lost the playoff to Brittany Lang.

1. If an infraction can’t be seen with the naked eye, there’s no penalty, even if video shows otherwise.

2. If a tournament committee determines that a player does “all that can be reasonably expected to make an accurate estimation or measurement” in determining a line or position to play from or to spot a ball, then there will be no penalty even if video replay later shows that to be wrong.

Nordqvist clearly fits the standard for relief created in the new decision, and expressed her satisfaction with the new rule as it relates to her.

"I am happy with the USGA and R&A Rules Decision regarding infractions that cannot be reasonably seen with the naked eye," she wrote in a message posted to Instagram. "After my experience last year at the U.S. Women's Open at Cordevalle, I know firsthand the impact that the advancements in technology can have on potential rulings. As I said following the round I made a mistake, and I take full responsibility for it. I am happy that going forward this will no longer be an issue. I will be making no further comments on this new decision. Thank you for your understanding."

As for Thompson? In order for her to have avoided the penalties under this new decision, the championship rules committee would have had to determine that her mismarking wasn’t visible to the naked eye, or that she showed “reasonable judgment” moving her ball back to its mark.

While Lewis said she believes Thompson should have won the championship, she wasn’t completely certain how “reasonable judgment” would be applied.

“I just think it was so clear,” Lewis said. “Yeah, you had to zoom in on it. It’s pretty clear what happened.”

Lewis wasn’t saying she believed Thompson intentionally returned the ball to a wrong spot, only that it was clear she didn’t return it correctly.

“I don’t think she purposely tried to move her ball,” Lewis said. “I’ve never seen her do that.”

Lewis has more of an issue with the two-shot penalty Thompson got for signing an incorrect scorecard, because Thompson didn’t know her scorecard was incorrect. Lewis also believes the USGA should implement a rule that would “close out” a round and make scores official once the following round begins. If that had been the case, Thompson wouldn’t have been penalized at all.

“I still think she won that golf tournament by four shots,” Lewis said. “I hope she thinks that too.”

Catriona Matthew also wasn’t sure a rules committee would grant Thompson relief, with a TV viewer apparently seeing the infraction with the naked eye and with “reasonable judgment” not a certainty in how a committee viewed her marking of the ball.

“She clearly moved the ball,” Matthew said. “Some people are then going to argue, 'How much should you move it for it to be a penalty?’”

Whan said the LPGA rules staff hasn’t gone back to review how Thompson’s infractions could have been treated under the new standards. He’s respectful of the champion, So Yeon Ryu.

“Could we have had a different outcome, I don’t know if it does any good to assess that now,” Whan said.

Like Lewis, Matthew sees the new decision creating a gray area that’s going to land in the laps of local rules committees.

“I think it muddies the water even more,” Matthew said. “That puts the rules officials in a much harder position. What do they call a judgment call?”

If Matthew had her way, viewers wouldn’t be able to call in violations, which would have spared Thompson the penalties.

“I don’t think you should be able to phone in after the fact,” Matthew said.

With the release of Decision 34-3/10, the USGA and R&A announced they are immediately beginning a “comprehensive review of broader video issues” within televised competition, including viewer call-ins.

That can’t happen fast enough for most LPGA pros.

“I think everyone understood the two-shot penalty [for the mark], but not the scorecard,” reigning U.S. Women’s Open champ Brittany Lang told Golf Channel’s Tom Abbott in a Golf Central interview. “My opinion is they have to do away with call-ins.”

How strong is Lang’s opinion on that?

“I think if you are going to call in, they ought to put your picture and your information on TV, just to show who is doing this and why you did it,” Lang said

More than one LPGA pro wished the USGA and R&A would have gone further on Tuesday, or more strongly committed to going further.

“I don’t feel like this is going to help,” Angela Stanford said. “It looks like the USGA and R&A are making an effort, but I wish they would just address the big question everyone is asking: Why allow people to call in at all? Or, if you are going to let people call in, why can’t you stop it at the end of the day? In my opinion, it means you must want that to continue.”

Count Mo Martin among those who want viewer call-ins to end.

“In my opinion, nobody has been caught flagrantly cheating,” Martin said. “I don’t think Lexi or Anna got an advantage. This is about tiny grains of sands and a ball maybe being moved a quarter-inch.

“The bigger issues are do we allow call-ins? And I hope that’s going to be addressed.”

Whan is optimistic those solutions are coming with the LPGA, PGA Tour, European Tour, Ladies European Tour and PGA of America joining the USGA and R&A in a comprehensive review of the broader video issues.

“I love the fact they are building a team to do that, and they are taking input from all different tours.” Whan said. “I feel like whatever decision comes out of that, it will be the right one. I’m enthusiastic they moved so quickly on what they did, and I really like the process for going forward.”