Newsmaker of the Year: No. 6: Keegan Bradley 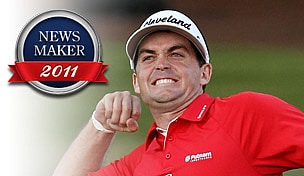 Getty Images
LA JOLLA, CA - FEBRUARY 05: Jeff Quinney hits a bunker shot on the first hole of the South Course during the first round of the Buick Invitational at the Torrey Pines Golf Course on February 5, 2009 in La Jolla, California. (Photo by Scott Halleran/Getty Images)  -

Keegan Bradley is as wholesome as a peanut butter-and-jelly sandwich.

He is as down to earth as an oatmeal-and-bagel breakfast.

That’s what we learned about Bradley after he won the PGA Championship in August in his first start in a major championship.

The rookie emerged from that chaotic, frenzied finish at the Atlanta Athletic Club with an “aw-shucks” story that made you feel like you grew up next door to him.

Bradley may have rocketed across the PGA Tour’s sky like a shooting star this year with his two victories, his major championship and Rookie of the Year award, but he is about as uncomplicated as any of our top newsmakers come.

We learned this from his mother, Kaye, standing at the back of the 18th green after the crazy finish to the year’s final major.

That’s where she told us about how Bradley spent the night before the final round helping take care of his 10-month-old nephew, Aidan, in a townhouse Keegan shared with his mother and sister, Madison.

That’s where Kaye told us about how she made her son an oatmeal-and-bagel breakfast before sending him off to the final round with a pair of peanut butter-and-jelly sandwiches she packed for his golf bag.

That’s where she told us he matter-of-factly said he was going to win the Wanamaker Trophy before heading out the door that morning.

“That’s one of the most impressive things about Keegan, his ability to come back like he did,” Kaye said. “He has done it so many times. He’s just so rock solid, so sturdy.”

Of course, there are some uncommon genetic components to Bradley’s makeup. He is, after all, the nephew of LPGA Hall of Famer Pat Bradley.

Still, even with his golf background, Bradley was humbled hoisting the Wanamaker Trophy.

“It seems like a dream,” Bradley said in the wake of his victory. “I’m afraid I’m going to wake up here, and it’s not going to be real.”

Bradley’s entire season had an unreal quality to it. He started the year ranked No. 329 in the world. He was No. 203 when he broke through to win the HP Byron Nelson Championship in May. He was No. 108 when he won the PGA Championship.

Bradley's rise has taken him to No. 30 in the world rankings today and No. 6 in Golfchannel.com’s Newsmaker of the Year rankings.