Newsmaker of the Year: No. 9: Charl Schwartzel 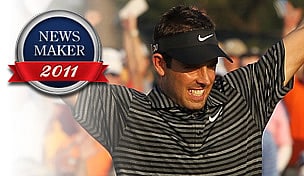 Sarazen, Nelson, Hogan, Snead, Player, Watson, Ballesteros and Faldo all produced magic closing out victories at Augusta National, but none of them ever conjured the kind of sorcery Charl Schwartzel showed us winning there in April.

On a dizzying day of lead changes and hard charges, Schwartzel stole the final scenes to win his first major championship in unforgettable fashion.

“So many roars,” Schwartzel said. “That atmosphere out there was just incredible. It was just a phenomenal day.”

Eight different players held at least a share of the lead in one of the most frenetic final rounds in 74 years at Augusta National.

“The way he played, with those birdies to finish, that’s as good a golf as I’ve ever seen,” three-time Masters winner Gary Player said. “I can’t get over how he finished.”

Fifty years after Player jolted his South African homeland by becoming the first international player to win the Masters, Schwartzel made that nation proud again. At 26, Schwartzel closed with a 6-under-par 66 to join Player and Trevor Immelman as South African Masters’ champs.

Four shots back of Rory McIlroy at day’s start, Schwartzel gave more than a hint of what was to come by chipping in for birdie from 75 feet at the first hole. He followed up with an even better shot at the third, holing out from the fairway with a sand wedge from 114 yards for eagle.

At one point through all the dramatic twists and turns of this final round, five players were tied for the lead.

The action was head spinning all day long with Tiger Woods charging from seven back to grab a share of the lead on his way to a front-nine 31. There was McIlroy’s collapse at the 10th, where a wild drive among the Augusta National cabins derailed his bid. There was Geoff Ogilvy’s run of five straight birdies on the back nine, Bo Van Pelt’s pair of eagles back there. Jason Day, Adam Scott, Luke Donald, K.J. Choi and Angel Cabrera all had their chances.

In the end, here’s how Schwartzel closed it out over those final four holes:

No. 15 – A shot behind Scott at the tee box, Schwartzel hit a strong drive and a 6-iron just over the back of the green. He chipped to 10 feet and made the birdie putt.

No. 18 – A pitching wedge to 18 feet gave Schwartzel his final birdie and an exclamation point to end the day.

“I’ve never seen anything like it,” Schwartzel said of the day’s denouement.

In all of the Masters’ rich history, nobody else has, either.