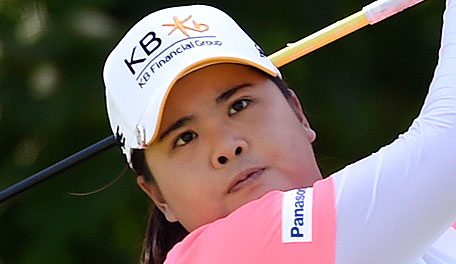 That’s the way it is for Rolex world No. 1 Inbee Park.

Park says being No. 1 for 76 weeks over the last three seasons and being in the hunt in so many major championships over that span are making her a lot more comfortable under pressure.

She arrived at the U.S. Women’s Open this week as the clear betting favorite with SkyBet setting the odds on her at 13/2. Lydia Ko and Stacy Lewis are next at 11/1.

Park is blazing a history-making trail in majors these days, and she’ll be looking to continue it at Lancaster Country Club, where the difficult green complexes, with their humps and swales, make even short putts adventurous. As one of the best putters the women’s game has ever seen, that should suit Park well.

Park, 26, is looking to win back-to-back majors after claiming the KPMG Women’s PGA Championship a month ago. It was her fifth major championship triumph over the last 12 majors played. She’s going for her seventh major championship title overall, a feat that would move her into a tie for seventh on the all-time list behind only Patty Berg (15), Mickey Wright (13), Louise Suggs (11), Annika Sorenstam (10), Babe Zaharias (10) and Betsy Rawls (8).

“I am good at the tough golf courses,” Park said. “I am good under pressure. I just try to keep talking to myself that way, to try to give myself confidence coming into the major championships. I think that's how it's really worked the last few years. And I try to just keep that going.”

Park’s overall major championship record is impressive. In 35 majors played as a pro, she has finished in the top 10 in 19 of them. She has missed the cut in just one.

Park didn’t make a bogey over the final 56 holes in winning the KPMG Women’s PGA at Westchester Country Club.

Park is in her third reign at No. 1. She has learned to be comfortable with the extra scrutiny that comes with it.

“When I first became the No. 1 player in the world, I felt a lot more pressure,” Park said. “I felt like I have to show something to other people, that I'm the No. 1 player. I felt a little bit like maybe I'm not in a good spot. I felt more comfortable in the No. 2 spot. The second time I was there, I felt a little more comfortable, and I thought maybe I can probably treat this somewhat similar to No. 1, 2 and 3. But now, it's my third time being here, and I don't feel that much pressure anymore.

“I feel like No. 1 or 2, what's the difference? I'm just playing good golf. I don't need to show anybody anything. I just try to play my own golf and just not try to do something for other people. The more that I experience it, you're just another golfer."

For Park, there were lessons in what she was feeling as she gained and lost the No. 1 ranking.

“The No. 1 spot, there's nowhere else to go but down,” she said. “So, you're going to come down at some point. But you don't have to be scared to go down, I don't think. That's the only place you can go. What you're trying to do is just stay there as long as you can. I'll have a time where I'm going to go down, as well. I'm just not going to be scared for that. I'm just going to try to enjoy while I'm here.”

Park actually learned to deal with pressure when she wasn’t playing well. Brad Beecher, her long-time caddie, saw that in the struggles Park endured trying to live up to expectations after she won her first major in 2008. Park had a top-10 finish the week after her U.S. Women’s Open victory at Interlachen and then went 14 months without another top-10.

The scrutiny on Park in that swoon was intense back in her South Korean homeland.

“She took that pretty hard,” Beecher said. “That stretch, there was just so much pressure on her, but she picked herself back up.”

Beecher says Park’s demeanor in majors is a vital part of what makes her so good in them.

“The way she handles herself, the way she stays so level, there’s a charisma in that,” Beecher said. “No matter what happens, she’s the same.”

While Park is renowned for her putting, she has become one of the most consistent ball strikers in the women’s game.

“Three years ago, it seemed like she was just riding her putter,” Stacy Lewis said. “That was pretty obvious. She was making putts from everywhere. Over the last year, I don’t think her putting has been as good, but her ball-striking has gotten better. She gets hot with her putter now, with her good ball-striking, it’s a pretty deadly combination.”

Park was 16th on tour in hitting greens in regulation when she won three majors in 2013. She’s fifth in GIR this year.

Park is coming off a missed cut in her last start at the Walmart NW Arkansas Championship, but she wasn’t overly concerned. It was her first missed cut in 27 starts.

“My ball striking was still great,” Park said. “I putted really badly two weeks ago. That definitely gave me somewhat of a wake-up, because I haven't really had a bad tournament or a really bad week this year. That definitely made me practice harder and gave me a lot more motivation coming into this week. So hopefully that's going to work nicely playing this week.”