No. 1 ranking weighs heavy on those not named Tiger 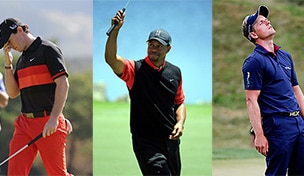 Getty Images
KUALA LUMPUR, MALAYSIA - OCTOBER 12: Mika Miyazato of Japan hits from a bunker on the 5th during day three of the Sime Darby LPGA at Kuala Lumpur Golf & Country Club on October 12, 2013 in Kuala Lumpur, Malaysia. (Photo by How Foo Yeen/Getty Images)  -

Shakespeare didn’t write about golf all those years ago, but the great poet and playwright’s words are relevant to what’s happening at the top of the men’s and women’s games today.

Uneasy lies the head that wears the crown.

Shakespeare put those words in Henry IV’s mouth in his play about the king’s embattled reign, but they aptly capture the challenge and burden that comes with the No. 1 world ranking in golf these days.

The No. 1 ranking has never appeared to be a more weighty or burdensome crown than it has become for anyone not named Tiger Woods. It’s something that couldn’t be fully appreciated until Woods seized the top ranking back earlier this year.

The WGC-HSBC Champions begins Thursday in China with a Shakespearean mystery as a subplot.

The last four world No. 1s not named Tiger Woods are in the field, and, to varying degrees, they’re all in some sort of puzzling slide, whether gentle or jarring.

Rory McIlroy, Luke Donald, Martin Kaymer and Lee Westwood will tee it up at Sheshan International this week looking to find the form that helped them get atop the world rankings.

When you factor in what’s happening to slumping former No. 1 Yani Tseng in women’s golf, it’s difficult to imagine a time when so many former No. 1s have swooned together.

Woods has won five times this season while taking back the top ranking. McIlroy, Donald, Westwood and Kaymer haven’t won anything this season. Though all four play the PGA Tour, it’s surprising that none of them is really in the thick of the European Tour’s Race to Dubai. Westwood starts this week 19th in the standings, Kaymer 32nd. Donald and McIlroy are in danger of not even qualifying for the season finale DP World Tour Championship. They have to crack the top 60 in the standings to gain a spot. Donald is No. 61, McIlroy No. 62.

“Of course, I expect myself to be a lot higher than that,” McIlroy said in China this week. “I won The Race to Dubai last year, and I was second in '11, and I was second in '09. So, I've been a factor in it for the last few years, and to be down where I am, obviously, doesn't feel too good and is a reflection of how my year has gone.

“It's just the reality, and the reality is I haven't played well enough to be a factor.”

Photos: Players who have reached No. 1

Woods isn’t playing the WGC-HSBC Champions, but the nature of what’s happening to all four players who succeeded him as No. 1 in the wake of his personal woes ought to add to the appreciation of Woods’ enduring ability to hold up under all the scrutiny, expectations and demands that come with the No. 1 ranking.

Thursday will mark exactly three years to the day Woods last lost the No. 1 ranking. It took him two-and-a-half years to get it back.

Nobody outside Woods in today’s game understands the unique challenge of holding on to No. 1 after you get there better than McIlroy, Donald, Westwood, Kaymer and Tseng.

This is the 654th week that Woods has reigned atop the world rankings. He has been a pro for 16 years. He has been No. 1 for 12 ½ of those years. In some ways, that’s more remarkable than his 14 majors. You have to try to peak at the right times to win one or two majors a year. You have to consistently be on top of your game to stay No. 1 for any lengthy reign.

The marvel of Woods’ success isn’t necessarily all the talent. It’s how he has kept motivated to do the work to be better than everyone else for so long. Because the thing is, the more you raise the bar, the harder everyone else behind you works to catch up. There’s going to be a relentless parade of challengers testing you.

Even in the women’s game of late, we’ve seen the debilitating burden the No. 1 ranking can bring.

Tseng dominated the LPGA, reigning at No. 1 for 109 weeks, but she is the first to admit the scrutiny and pressures that came with the run wore her down. She was still No. 1 back in March of this year. She has slipped to No. 26 in this newest ranking.

“It just drove me crazy,” Tseng said of trying to live up to being world No. 1. “Everyone wants to be No. 1, but nobody understands how hard it is to be No. 1. Now I know why Lorena [Ochoa] and Annika [Sorenstam] retired, because it’s very hard.”

This week’s WGC-HSBC Champions is a study in the uneasy heads that once wore crowns.

It’s a shame Shakespeare can’t be there to write the story.