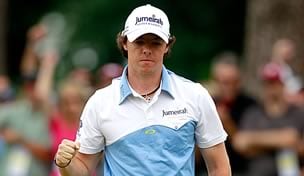 It ruthlessly peels away the psychological armor a player straps on to hide weakness.

That’s what Rory McIlroy learned tracking down his ball back between the Peek and Berckmans cabins at Augusta National two months ago, what he learned after burying his face in his arms near tears at the 13th tee with his dream of winning the Masters all but gone.

With that collapse stripping him bare, McIlroy didn’t like what he saw in the mirror afterward.

He saw a nice guy – speaking purely of his competitor’s persona – too nice a guy between the ropes to win majors.

He told us as much this week.

McIlroy told us he needed to play the game with a colder heart.

So this is what that Masters’ loss has wrought: No more Mr. Nice Guy!

Well, so to speak, because that’s the terrific story behind the record romp McIlroy’s putting together this week in the 111th U.S. Open.

Nice guys can finish first. In fact, they can win in routs. They can ruthlessly put their foot on the neck of the competition and decimate their foes.

That’s what McIlroy will show us this week if he finishes off the rout on Sunday.

“I think they go hand in hand, you know, having a little bit of attitude and a killer instinct,” McIlroy said. “I think that's what you need on the golf course, especially in the position that I find myself in. You can't get complacent. No lead is big enough, so you need to just keep going.”

At 14-under 199, McIlroy’s going where no player's gone before in the U.S. Open. He’s smashed the championship’s 54-hole scoring records.

The 22-year-old from Northern Ireland is doing so with a killer instinct that could make him the game’s next dominant force.

There’s no denying McIlroy’s nature is at odds with the cold-hearted competitor’s attitude he’s cultivating.

McIlroy keeps showing us he’s a gracious, compassionate soul. We saw it in the locker room in the immediate aftermath of the Masters loss, in the gracious way he stood and answered all the tough questions about the most disappointing loss of his career. We saw it in McIlroy’s congratulatory tweet to Masters winner Charl Schwartzel, a photo of McIlroy with Schwartzel in the winner’s green jacket on their flight away from Augusta. We saw it again in McIlroy’s trip to Haiti last week for UNICEF, in the aid he’s giving the children in that country.

“Rory’s got a bunch of talent,” said Jason Day, who is tied for third, but nine back. “The good thing about Rory is that he's a great guy. So, he’s a hard guy to hate. He's a really, really great bloke, and I really enjoy playing with Rory.”

But that’s the funny thing about McIlroy. He can’t hide his nature. He spoke Friday about being more arrogant, more cocky, more selfish inside the ropes, but in the middle of his round earlier in the day he went out of his way to fetch Phil Mickelson’s divot and deliver it to Mickelson’s caddie, Jim “Bones” Mackay.

Great blokes can do that, and then they can turn around and plunge straight-arrow golf shots into their competition’s heart.

McIlroy’s showing us the best kind of killer instinct this week, and yet his work isn’t done.