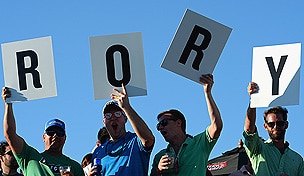 Getty Images
“It didn’t make any sense to me. The guys behind us hadn't even reached the fairway on a par 5.” – after becoming the first high-profile player to be hit with one of the European Tour’s new “monitoring” penalties for slow play  -

PALM BEACH GARDENS, Fla. – Rory McIlroy is proving to be a fierce closer.

Losing that 54-hole lead at the Masters three years ago created a resolve within him with a Sunday lead.

McIlroy has slammed the door every time he has built a 54-hole lead since that Masters’ collapse in 2011. He’s 4-0 with a lead going into Sunday since then.

He was asked if there’s any coincidence in that.

“Definitely not a coincidence,” McIlroy said. “I learned a lot that day. I learned exactly how not to protect a 54‑hole lead.  I went out there being very protective, very cautious, and it's not the way . . . I should have just stuck to the game plan, stuck to my process, not looked at the leaderboard, not looked at what other people are doing.

“So it was a huge learning day in my career and that's the reason that every 54‑hole lead that I've had since I've been able to close the deal.  Hopefully I can keep that run going tomorrow.”

Here’s McIlroy’s record as a pro with a 54-hole lead: