One-of-a-kind Weekley gunning to get back Tour card 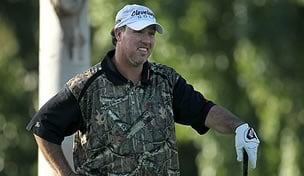 Getty Images
NORTON, MA - SEPTEMBER 04: Phil Mickelson of the United States watches his shot from the rough during the first round of the Deutsche Bank Championship at TPC Boston held on September 4, 2009 in Norton, Massachusetts. (Photo by Michael Cohen/Getty Images)  -

Boo Weekley still looks like he walked out of the pages of a Dan Jenkins novel.

Country-boy strong with a blacksmith’s hands, plow-horse thighs and that colorful Southern drawl, Weekley’s story continues to sound like a figment of some writer’s imagination.

Even in his struggles this year, the tale grows.

While Weekley, 39, has been absent from the game’s spotlight for a few difficult years, he’s back in it this week at the McGladrey Classic. He’s back for reasons he would prefer not to be.

Weekley is perched at No. 121 on the PGA Tour money list, making him one of the fall’s “bubble boys” in the quest to earn PGA Tour fully exempt playing privileges next year. After McGladrey, Weekley will get one more shot at securing a top-125 finish at the season-ending Children’s Miracle Network Hospitals Classic Nov. 8-11. The Disney-based event announced Tuesday that it had extended a sponsor exemption.

Highly motivated to turn around his game, Weekley wants to write a happy ending to his unlikely story.

“It’s embarrassing, how is that? Just the way I’ve been playing the last two years,” Weekley said during the Children’s Miracle Network media day. “I don’t care if I’ve been hurt or not.”

Weekley’s injuries go beyond his third shoulder surgery at the start of this season.

In his typically guileless manner, he revealed Tuesday that one of his injuries has literally been a pain in the rear.

“I had cysts in my rectum,” Weekley said. “How do you put that?”

That’s pretty much how you put it, he was told.

Pain has been an unwelcome companion this year.

Weekley has had three surgeries this season, one on his shoulder, two to remove those cysts.

After losing his PGA Tour card last year and failing to make it through Q-School, Weekley is working to earn his status back mostly through sponsor exemptions. This week he will play his 24th event of the season. Two-thirds of his starts have come through sponsor invites.

Though Weekley has won twice in his career, he says winning his card back will feel like a victory.

“Ever since I came back from that hiney surgery, that is how I’ve felt.”

In ’09, Weekley hurt his left shoulder jamming his club into a hillside in the final round of The Players Championship. He hasn’t been the same since. He had one surgery on that shoulder in 2010, another at the start of this year. He had his first surgery on the rotator cuff in his left shoulder as a boy in ’87 or ’88 after he hurt himself playing baseball.

This spring, Weekley finally started feeling good about his game again, only to endure the setback those cysts caused in April at the RBC Heritage, an event he won in ’07 and ’08.

“I started hurting at Hilton Head on Saturday night,” Weekley said. “On Sunday, I felt like I could hardly walk. I went over to [the Texas Open], and I couldn’t walk at all.”

Weekley had the first cyst removed in outpatient surgery the week after, but the pain didn’t go away. Another MRI revealed a larger cyst, and he had that removed, too.

“They had to put me out for that one,” Weekley said. “I’ve been fighting ever since then because I’ve lost all my confidence.”

Weekley missed a month of the season recovering.

Feeling better physically now, he is still waiting for his game to return fully. He has missed his last four cuts in a row, seven of his last nine.

“The shoulder feels great now, but there are still some problems, some tightness in it,” Weekley said. “It won’t ever get right, I don’t think.”

There was some inspiration for Weekley at the Children’s Miracle Network Hospitals Classic media day. That’s where he met Chandler Fullman, a 16-year-old junior at Hoover High School outside Birminham, Ala., who was chosen by the children’s network to represent the hospitals in the tournament’s pro-am competition. Fullman collapsed as a freshman while working out at school the day he was supposed to try out for the golf team. He fell into a coma and didn’t wake up for nearly six weeks.

Diagnosed with AVM, Arteriovenous Malformation, an abnormal connection between veins and arteries, Fullman had to learn to walk again and hit golf balls again, but he’s rebounding promisingly.

Fullman didn’t know Weekley was going to be attending media day on Tuesday at Disney World, but it was great timing. Just this past week, Fullman filed a book report in English class. He chose to review “True Boo,” Weekley’s autobiography.

“I hope he gets better grades than I did,” Weekley cracked.

Fullman and Weekley hit it off.

“I like Boo because he is such a down-to-earth, normal guy,” Fullman said. “He is like his book. He is true Boo. And being from Hoover, Ala., he talks just like we do.”

“If it doesn’t inspire you, you don’t have a heart,” Weekley said.

Not so long ago, Weekley said he wouldn’t be long for the PGA Tour. His great aim was to make enough money so he could retire early and hunt and fish more.

Weekley says his ambitions have changed, the injuries changed them.

“I am looking at it very differently,” he said. “I have to make this happen. I don’t want to go out and have you all writing that I left on a hard note.”

Weekley wants his larger-than-life golf tale to have that happy ending. 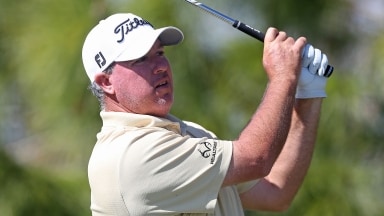 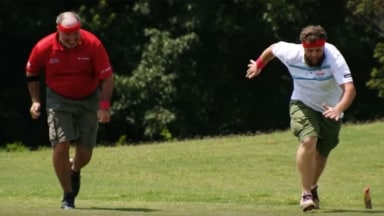