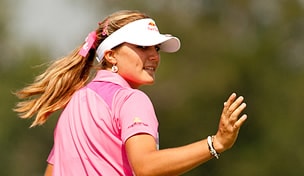 Lexi Thompson’s on her own timetable.

The LPGA should know that by now.

While LPGA commissioner Mike Whan really wanted the 16-year-old wunderkind to pursue tour membership through Qualifying School this fall, and though Thompson’s camp agreed, she can’t help herself. She seems determined to accelerate golf’s timetable yet again. She seems intent on claiming tour membership without going to Q-School.

With a stellar 5-under-par 67 Saturday at the Navistar LPGA Classic, Thompson built herself a five-shot lead going into Sunday’s final round.

Yes, nothing’s a lock in golf. We saw Keegan Bradley overcome five shots in the final three holes of the PGA Championship last month. Still, Thompson sits impressively on the threshold of history.

While it’s tempting to say she’s on the verge of shocking the golf world by becoming the youngest winner of an LPGA event, that wouldn’t be accurate. This wouldn’t be a shocker. Not after Thompson held the 54-hole lead at the Avnet Classic earlier this year. Not after she finished second at the Evian Masters last year, just missing out on a playoff. Not after what she did when paired with world No. 1 Jiyai Shin and No. 2 Ai Miyazato on a U.S. Women’s Open Saturday at brutish Oakmont when Thompson was just 15. She beat Shin by two shots and Miyazato by 10 that day. Not after she qualified for the U.S. Women’s Open when she was 12.

If Thompson holds on and wins Sunday, she’ll surpass Marlene Hagge (18 years, 14 days) as the youngest winner in LPGA history. Thompson will be 16 years, 7 months and 8 days old on Sunday.

If Thompson wins, there are some large questions to be answered about her future.

As a non-member, if Thompson wins, it’s possible she will be able to claim LPGA membership and skip the rest of Q-School this fall.

Because the LPGA has a rule requiring members be at least 18 years old, Thompson can’t claim tour membership without first being granted a waiver of the tour’s age restriction.

So, basically, if Thompson wins, she has to start the process for membership. She has to apply for a waiver. Then it’s up to Whan.

Given Whan granted Thompson special permission to go to Q-School this year in pursuit of tour membership, it makes little sense that he would deny her request for a waiver to claim membership as part of her winner’s prize.

A compromise, however, makes sense.

If Thompson wins Sunday, it isn’t difficult to see Whan offering Thompson a waiver so she can claim tour membership for her victory as long as she agrees to defer membership until next season.

That makes sense for a number of reasons. First, Thompson will be 17 at the start of next season. She turns 17 on Feb. 10. For Whan, who is concerned about opening the door to professional golf to juniors, there’s a precedent he doesn’t want to set granting membership to a 16-year-old. Secondly, even if Thompson wanted to claim membership immediately, the only event she could likely still gain access to this fall is the season-ending CME Group Titleholders. And whether Thompson’s a member or not, she gets the spot at CME for winning Navistar. Thirdly, Scott Thompson, Lexi’s father, said this week that school’s fall demands make scheduling difficult the rest of the year.

Lexi wasn’t getting ahead of herself Saturday night on or off the course. She didn’t address membership possibilities in her post-round interview.

Thompson will answer most of golf’s questions Sunday with her clubs doing the talking.

She’s been eloquent communicating that way so far this week. Thompson begins Sunday 15 shots ahead of world No. 1 Yani Tseng and 11 ahead of No. 2 Suzann Pettersen.