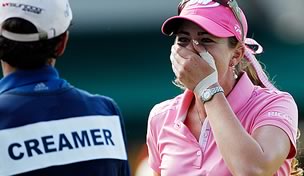 How brutish is The Broadmoor Golf Club?

This week will mark the first time a major championship in women’s golf will be played at more than 7,000 yards.

The Broadmoor will play to a scorecard yardage of 7,047 yards as a par 71. That’s more than 600 yards longer than it played as a par 70 when Annika Sorenstam won her first U.S. Women’s Open there in 1995.

While altitude is a factor with the ball flying farther on a golf course built at more than 6,000 feet above sea level, players say the challenge this week is more about precision than power.

The ball will fly about 15 percent farther at The Broadmoor than it does at sea level. Still, defending U.S. Women’s Open champion Paula Creamer said the course’s design, with so many uphill and downhill holes, makes yardages confusing to figure. The course is built at the foot of the Cheyenne Mountains. Correctly gauging yardages with the altitude difference and all the uphill and downhill shots is critical because the devilish greens require precise approaches.

Could Broadmoor’s greens be more confounding than Oakmont’s?

Creamer conquered some of the most difficult greens in the world when she won the U.S. Women’s Open at Oakmont last year.

She faces an equally daunting challenge at The Broadmoor this week. U.S. Golf Association executive director Mike Davis said the greens at The Broadmoor are “the hardest I’ve been around anywhere.” Part of the challenge will be overcoming the illusions created by the Cheyenne Mountains.

“Oakmont’s greens were the hardest I’ve putted, but you could see the breaks there,” Creamer said. “At Oakmont, the fact that you had to play 4-foot breaks from 4 feet away was very hard. At Broadmoor, a putt looks left to right, but it’s right to left. The greens are very quick, with lots of undulations.”

Players will quickly learn the old adage at Broadmoor: “Putts break away from the shrine.” That would be the Will Rogers’ clock-tower shrine built up on the mountain side.

“You constantly have to be aware where the shrine is at, where you are at,” Creamer said. “There’s a lot of thinking going on. It’s not just a matter of: This is what you see, this is what you get. That’s what you’re going to have to learn in the practice rounds. It’s all about the greens and being below the hole. There’s nothing better than being below the hole at Broadmoor.”

The Yani Tseng Era feels like it officially arrived with her 10-shot runaway victory at the Wegmans LPGA Championship.

Tseng’s already claimed four majors younger than anyone not named Young Tom Morris. This week, she sets her sights on being the youngest player to complete the career grand slam. If she pulls that off, she’ll already be one-third of the way to reaching Patty Berg’s record for most career major championship titles, at 15. Berg is the Jack Nicklaus of the women’s game as she relates to majors.

Tseng’s got the combination of power and precision to put herself in position to win her first U.S. Women’s Open, but it all depends on her hot-and-cold putter. She might be going for the third leg of the year’s grand slam if her putter had cooperated in the final round of the Kraft Nabisco Championship, where Stacy Lewis outplayed her.

Creamer hated boxing up the U.S. Women’s Open trophy and shipping it back to the USGA a few weeks ago.

She wants the center piece for her kitchen table back. That’s where the trophy spent most of the last year.

Creamer, 24, has eight LPGA titles but none since winning the U.S. Women’s Open at Oakmont. She’s highly motivated to become the first player since Karrie Webb (2000-2001) to win back-to-back U.S. Women’s Opens.

“I don’t want to rest on my laurels,” Creamer said. “I want more, that’s for sure. At the same time, I’ve had to work a lot on my golf swing. I’ve made some changes. I’ve had a couple minor hiccups with my game.

“I’ve been working really hard, and I want it. I want it more than I have before. I didn’t think that was possible, but it is. I’m just determined.”

How compelling will the Creamer-Tseng matchup be in the first two rounds?

Eyes will be riveted on Creamer, Tseng and U.S. Women’s Amateur champion Danielle Kang in their grouping in the first two rounds.

It’s a terrific early matchup allowing U.S. Women’s Open fans to gauge the state of these two favorites’ games with the feeling that one’s going to have to go through the other to claim the trophy.

This championship brings out the best in Creamer, who won by four shots at Oakmont. She hasn’t finished worse than a tie for sixth in the last three U.S. Women’s Opens.

Tseng has won every major but the U.S. Women’s Open. It’s the championship that has given her the most trouble in her young career. Her tie for 10th at Oakmont last year was her first top-10 finish in four U.S. Women’s Open starts. She’s missed the cut in two of them.