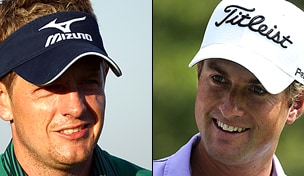 Setting the agenda for the week ahead with five questions for tournament golf at large ...

Simpson can overtake Donald as the PGA Tour’s leading money winner this week.

With a finish of 15th or better at the McGladrey Classic, Simpson can jump over Donald to the top spot. Simpson’s won twice in his last five starts and trails Donald by $68,971 with just two events remaining to decide the money title.

It’s possible Simpson and Donald both turn up at the Children’s Miracle Network Classic next week at Disney World. Though Donald’s commitment seems unlikely, especially with his wife expecting their second child in a couple weeks, he told reporters last week he hasn’t yet ruled out the possibility. Donald is aiming to become the first player to win the money titles on the PGA Tour and European Tour in the same season.

If Simpson and Donald both turn up at Disney, they turn that event upside down. Usually, the season-ending event is all about the other end of the money list, the battle to secure Tour cards with a top-125 finish on the money list.

Where does Rickie Fowler rank among the game’s best young players?

So many young players are stepping up now. We’ve seen Martin Kaymer (26) grab the No. 1 world ranking after winning the last major in 2010, Charl Schwartzel (26) win the Masters, Rory McIlroy (22) run away with the U.S. Open, Keegan Bradley (25) claim the PGA Championship, Jason Day (23) challenge in multiple majors, Simpson (26) make a run at the PGA Tour money title and Matteo Manassero (18) win a pair of European Tour titles.

It seems as if they’ve all buzzed past Fowler in the last year or so, but the buzz is back around Fowler heading to the McGladrey Classic this week. You look at all those players listed above, and nobody carries more potential to excite fans than Fowler should he start winning. Fowler’s Q-rating potential has to rank above even McIlroy’s should Fowler win a major.

With Fowler claiming his first professional victory Sunday at the Kolon Korea Open, he brings momentum and confidence to Sea Island, Ga., this week in his bid to win his first PGA Tour title. Fowler, 22, may not have beaten a deep field in South Korea, but he beat McIlroy by six.

'Time to get my first win @pgatour!” Fowler tweeted after winning in Korea.

So just how young is the game going to get?

With Fowler jumping into the top 25 of the world rankings this week, the game feels like it’s never been younger at the top.

If you go back to the U.S. Open at Bethpage Black in the summer of 2009, there was just one player in his 20s in the top 10 in the world rankings. Sergio Garcia was the lone wolf, and he barely qualified at 29 years and 6 months.

Today, there are four players in their 20s among the top 10 (McIlroy, Dustin Johnson, Kaymer and Day).

Today, the average age of the top 10 is 31 and threatening to get younger in a hurry.

What’s the upside for Bud Cauley once he gets a PGA Tour card?

Add Cauley to the growing list of rising young stars.

As predictors of success go, earning your PGA Tour card without having to go to Q-School ranks way up there.

Since 1980, the only players to go from college to the PGA Tour in the same season without a trip to Q-School are Gary Hallberg, Phil Mickelson, Justin Leonard, Tiger Woods and Ryan Moore. They all went on to win PGA Tour events with three of the five winning majors.

Cauley, 21, who turned pro this summer with one year of eligibility left at the University of Alabama, virtually assured he’ll win exempt PGA Tour status next year with his non-member earnings. With a third-place finish at the Frys.com Open Sunday, Cauley won $340,000, pushing his non-member earnings to $671,150 for the season. That’s the equivalent of 114th on the money list. If his winnings rank among the top 125 at season’s end, he gets a PGA Tour card.

Cauley will tee it up at the McGladrey’s Classic this week looking to pad his earnings. He gained the spot with his top-10 finish at the Frys.com Open.

Will Yani Tseng build a larger lead as world No. 1 than Tiger Woods did?

Tseng is putting a stranglehold on the world rankings in women’s golf, extending her reign at the top to a 35th consecutive week.

With Tseng coming off a victory at the LPGA HanaBank Championship last weekend, her sixth LPGA title of the year, she arrives at the Sime Darby LPGA Malaysia this week as the favorite again.

The LPGA brought the top 10 money winners into a news conference in Malaysia Tuesday, where a reporter asked players if they were beginning to feel like they were playing for second place with Tseng dominating.

ldquo;We never really want to go into a tournament feeling like we’re playing for second, but Yani is having a fantastic year,” Cristie Kerr said. “Any time she’s on the front page of the leaderboard, she is going to be a very strong factor, and she has a lot of confidence right now. Definitely don’t want to feel like that, but she’s very hot at the moment, and we are all trying to do our best job out there.” 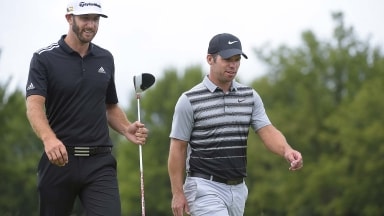 Sunday at Innisbrook: DJ, Casey or the field?

The final pairing of Dustin Johnson and Paul Casey will start in the spotlight Sunday at the Valspar, but on a track as unpredictable as the Copperhead Course, this is hardly a match-play situation.