Par 5: Questions for the Memorial 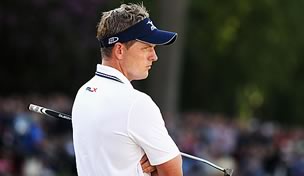 Setting the agenda for the week ahead with five questions for the Memorial ...

What kind of respect will new No. 1 Luke Donald command at the Memorial?

More respect than any American player is getting these days.

That’s what the oddsmakers tell us.

Whether you approve of gambling or not, one of the best ways to view the public’s confidence in a player is through the odds established by golf’s major betting houses. The whole “science” of oddsmaking is based on gauging the public’s perception of who ought to be favored to win. Really, it’s the betting public that sets odds.

Ladbrokes makes Donald the favorite at the Memorial this week at 10-to-1 with Phil Mickelson getting the next best odds at 14-to-1.

Though Donald’s never won a major, he’s also now the co-favorite with Mickelson to win the U.S. Open with the odds on each of them at 12-to-1, according to Ladbrokes.

So how long will Donald’s run at No. 1 last?

We’re in a different territory in the world rankings.

Donald is the fourth different player to hold the No. 1 ranking in the last 32 weeks.

It's been 14 years since so many different players have held the top ranking in such a short span.

Before Tiger Woods was overtaken in the world rankings last fall, you would have to go back more than 4,200 weeks to find four different players holding the top spot. Ernie Els, David Duval, Vijay Singh and Woods were the only players to hold the top ranking between June 13, 1998, and Oct. 30, 2010.

Back in the late spring/early summer of 1997, Greg Norman, Tom Lehman, Els and Woods took turns holding the top spot over a 10-week period.

Donald’s run at No. 1 shouldn’t be the shortest in OWGR history. Lehman held the top spot a single week in the spring of 1997. With No. 2 Lee Westwood and No. 3 Martin Kaymer taking this week off, Donald’s run should last at least two weeks.

After that? With three major championships and a World Golf Championship in the next 11 weeks, there’s a load of world ranking points up for grabs this summer. If somebody gets hot, a player could build a nice lead at No. 1. If parity continues as golf’s theme, we could see a lot more volatility at the top.

Will there be tea and crumpets in the players’ lounge at the Memorial?

There’s a decidedly English theme at Muirfield Village this week.

England’s Justin Rose is back as the defending champ with England’s Donald making his debut as the world’s new No. 1.

Rose won the Memorial and the AT&T National within a month’s span last year. He’s made all but one cut in 12 starts this year with strong finishes at the Northern Trust Open (T-9), Transitions Championship (T-5) and Arnold Palmer Invitational (T-3).

Though there were questions whether U.S. players should make the trip to the European Tour’s flagship event, the truth is that once the first tee shot was struck, nobody on the other side of the pond cared that there were no Americans there. The storylines were strong and plentiful with Donald outdueling Westwood to win the title and the No. 1 ranking, with 18-year-old Matteo Manassero in the mix for his third title and with Ian Poulter and Els feuding over course design.

The Americans are being overshadowed in a large way in the world’s biggest events, from the last four majors to The Ryder Cup and the world ranking battle for No. 1. If not for all the focus on Woods, they’d be nearly irrelevant.

With Woods hurt and slumping, Phil Mickelson’s the Great American Hope, the United States’ biggest name with the biggest persona and the most cachet.

Though he’s failed with so many chances to become No. 1, Mickelson’s best suited this week to carry the American banner back onto the game’s grandest stages.

Is this the week Rory McIlroy gets his mojo back?

McIlroy conceded at the BMW Championship last week that he’s still making his way back from the dizzying blow of his Masters’ loss.

“I think I need to get myself into that position again to know how I've got over it and if I'll handle it better,” McIlroy said. “I think I've put a few things in place that will make me handle being in that position better again. But you never really know until you're tested in that environment.”

After squandering the 54-hole lead at the Masters, McIlroy made a quick rebound at the Maybank Malaysian the next week, immediately getting into contention before losing late in the final round to Manassero with a clumsy finish.

The double dose of disappointment seemed to catch up to him with the down time that followed.

McIlroy missed the cut in defense of his title at the Wells Fargo Championship, his first return to the United States since the Masters. He was eliminated in the round of 16 at the Volvo World Match Play and never got in contention at the BMW PGA after opening with a 76. He seemed to find some rhythm playing the weekend at Wentworth and will be looking to build upon it at the Memorial.