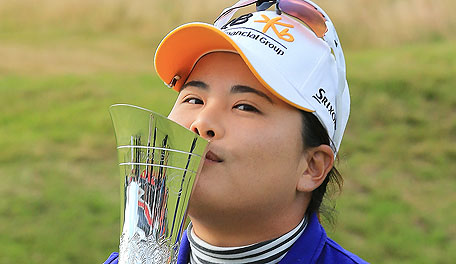 While revenge doesn’t seem like Park’s style, there was some of that fueling the fierce way she finished at Trump Turnberry.

“The most disappointing tournament I’ve had,” Park said. “On the front nine, I was leading by two. I only needed to shoot like 2 or 3 over on the back nine to win, and I couldn’t even do that. I was disappointed, because it was something I really wanted.

Park was left with such a deep ache because the Women’s British Open was the major championship she coveted most, and yet the one she believed was the most difficult to win. She shot 77 in the final round at Royal Birkdale. She also endured disappointment at St. Andrews two years ago. That’s where she went looking to win the fourth leg of the calendar year Grand Slam only to see her bid to sweep all the majors in a single season end.

“I’ve set one goal this year, one and only one, and that’s winning the British Open,” Park said with a hand on the Women’s British Open trophy in the media center at Turnberry. “And being the only goal I’ve set, it feels great.”

Blitzing Turnberry on a ferocious run in the middle of the final round, playing 10 holes in 7 under, Park closed with a 7-under-par 65, coming from three shots behind Jin-Young Ko (71) to win by three.

Park’s dominance in the majors is becoming epic. She has won six of the last 14 majors played. If she wins Evian next month, she will join Mickey Wright as the only women to win seven majors in a three-year span.

The LPGA is calling her feat a career Grand Slam, but the tour’s elevation of the Evian Championship to major status in 2013 complicates the designation. Golf Channel, based on its research department’s examination of the origins of how the “Grand Slam” concept was first applied to golf, is recognizing only a “sweep” of existing majors as a “Grand Slam.” The Associated Press also isn’t calling Park’s feat a career Grand Slam.

Park has won four of the five currently designated majors in women’s golf. Though she has won the Evian Championship, she won it in 2012.

“I won that the year before it became a major but I'm still an Evian Championship champion, and my name is still on that trophy,” Park said. “I feel like I've won all the majors in women's golf.”

Park says winning the Women’s British Open felt like the most daunting task in her major quest. She says it was especially meaningful winning it in Scotland.

“Scotland is obviously the birthplace of golf,” Park said. “It feels like this is where they started golf and this feels like real golf. So, I definitely wanted to put my name on a British Open trophy because it just means so much, the golf course, the place. Everything just has so much history. This is definitely the golfer's most wanted trophy.

“It’s just much more special. Every time I come to the British Open, everything seems so hard, the wind, the rain, the tee times. There's so much that I had to overcome in the Women's British Open. It always felt so hard.”

Brad Beecher, Park’s long-time caddie, knows how satisfying Sunday’s triumph was. He was there in the loss at Royal Birkdale. He was there at St. Andrews two years ago. He was on Park’s bag in the four top-10 finishes she endured trying to win over the five-year span coming into this year.

Park was at her best closing with a 65 at Turnberry. She hit just eight fairways in Sunday’s winds, but she hit 13 greens in regulation. Her famous putting, sometimes a frustration to her this year, was terrific. She took just 24 putts.

When Park’s at her best, her putter is the most feared club in women’s golf. She wielded it like a bludgeon winning those first three majors in 2013.

“It reminded me of a couple years ago when it was red hot,” Beecher said. “She just set up over the ball, and it felt like it was going to go in.”

Park used her best weapon to slay the memory of her worst losses in golf.