Pettersen has chance to overtake Park as No. 1 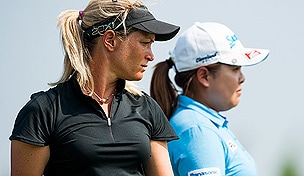 Getty Images
Matt Kuchar of the US tees off on the first hole at the Northwestern Mutual Challenge golf tournament in Thousand Oaks, California on December 5, 2013. The Tiger Woods Foundation announced recently that the annual unofficial event hosted by the 14-time major champion will move to Florida in 2014 following the final World Challenge contested at Sherwood Country Club in Thousand Oaks, west of Los Angeles, from December 5-8th. (Photo by FREDERIC J. BROWN/AFP/Getty Images)
-

The possibility of a giant jolt awaits late in the season in the women’s game.

Suzann Pettersen is in position to deliver it this week.

While the strength of field isn’t yet finalized for the LPGA’s Lorena Ochoa Invitational, it looks as if Pettersen will have a chance to overtake Inbee Park as the Rolex world No. 1 when play begins on Thursday.

There’s nothing shocking about the idea that Pettersen is good enough to be No. 1. It’s just stunning that she could catch Inbee Park before this season is out. It will be a shocker if 2013 ends without Park atop the world rankings, given the history-making season Park has fashioned.

The Lorena Ochoa Invitational strength of field won’t be set until play begins, but if it is similar to last year’s event, and it appears it will be close, Pettersen doesn’t even need to win this week to move past Park. She may have a chance to overtake her as Rolex world No. 1 with a second-place finish. Of course, that all depends on what Park does this week. The projections will be more definitive later this week.

Pettersen, 32, is the hottest player on the planet, man or woman. She has won three of her last five starts, and yet even she didn’t see this coming so quickly.

Back in late June, Park won the U.S. Women’s Open for her third consecutive major championship, her sixth LPGA title of the year. She was a whopping 5.35 average world ranking points ahead of Pettersen at the time. Today, Park is at No. 1 with 11.98 average points. Petersen is second at 11.35.

“If you told me back in June or July that this was possible, I probably would have laughed at you,” Pettersen told GolfChannel.com. “It looked impossible back then.”

Park, Stacy Lewis and Pettersen were ranked 1-2-3 in the world, respectively, at the U.S. Women’s Open. They were paired together in the first two rounds at Sebonack, and Park delivered a powerful message. She beat Pettersen by a cumulative 19 shots in their two rounds together, Lewis by 12.

It proved a turning point for Pettersen, who missed the cut that week.

“It was a reality check,” Pettersen said. “You learn more when you fail than when you play well. I’ve always been like that. It was like that back in 2007, when I semi-collapsed at the Kraft Nabisco coming down the stretch. That was a big disappointment then, but at the same time, it makes you feel like you want to get revenge, you want to prove you are better than that.”

After blowing a four-shot lead with four holes to play and watching Morgan Pressel win at Kraft Nabisco in ‘07, Pettersen licked her wounds and rebounded with a vengeance. She won her first LPGA title a month later, her first major two months later and four more LPGA and Ladies European Tour titles before the year was out.

“It’s funny how you look at a year,” Pettersen said. “It’s been a great year this year, but if you ask me today what stands out about it, the first thing I think about is missing the cut at the U.S. Women’s Open. It’s not winning Evian or another tournament. It’s something I could have done better. I think it’s just part of what drives me.”

Getting whipped by Park at Sebonack gave Pettersen a chance to compare her game with the world No. 1.

“I missed every putt, and I watched her make every putt,” Pettersen said. “It was very clear to me where I needed to get better.”

It also was clear to David Leadbetter, her swing coach.

“Suzann was like, `Well, we’ve got to change something,’” Leadbetter said. “She always reminded me of Nick Price. He was one of those players who I thought would enjoy a round where he shot 71 and hit every green in regulation more than shooting 66 with 25 putts. Suzann has come to realize how important putting is.”

Pettersen said she might not have worked 90 percent on her ball striking and 10 percent on her putting before the U.S. Women’s Open, but it seemed like it. After that thrashing at the hands of Park, Pettersen completely revamped her approach to practice. She says her practice is now 50-50, with putting getting as much or more attention than her ball-striking.

There weren’t any significant technical changes since the U.S. Women’s Open, Pettersen insists, just a new putting regimen for practice, a more structured routine with more time spent on the skill she never liked to practice.

“I always thought standing around the practice putting green was the most boring thing ever,” Pettersen said.

“I think people expected her to take over the mantel from Annika Sorenstam,” Leadbetter said. “She hasn’t quite done that, but I think over the next couple years you are going to see her best golf. I don’t think there’s any stopping her. She’s older, and she’s smarter, and she has goals in mind. She has the Olympics on her radar, and she wants to be No. 1.”

Pettersen, who has four LPGA victories this year and one LET title, has never been No. 1. She has been No. 2 behind four different No. 1s. She got in the rear view mirror of Sorenstam, Lorena Ochoa, Yani Tseng and now Park.

“This is the most comfortable I’ve ever been. In the past, I’ve chased it too much. Now, I’m not worrying if it’s going to happen or not. I feel like if I do my preparation and all my work, I’m really not going to stress out about it. In the past, I was maybe feeling like I was so close I had to do more of everything, practice more, play more, to the extreme of what was needed. Now I feel much more relaxed and that I can have more balance in my life.”

It’s a feeling that has her on the brink of delivering one more jolt to the women’s game this season.