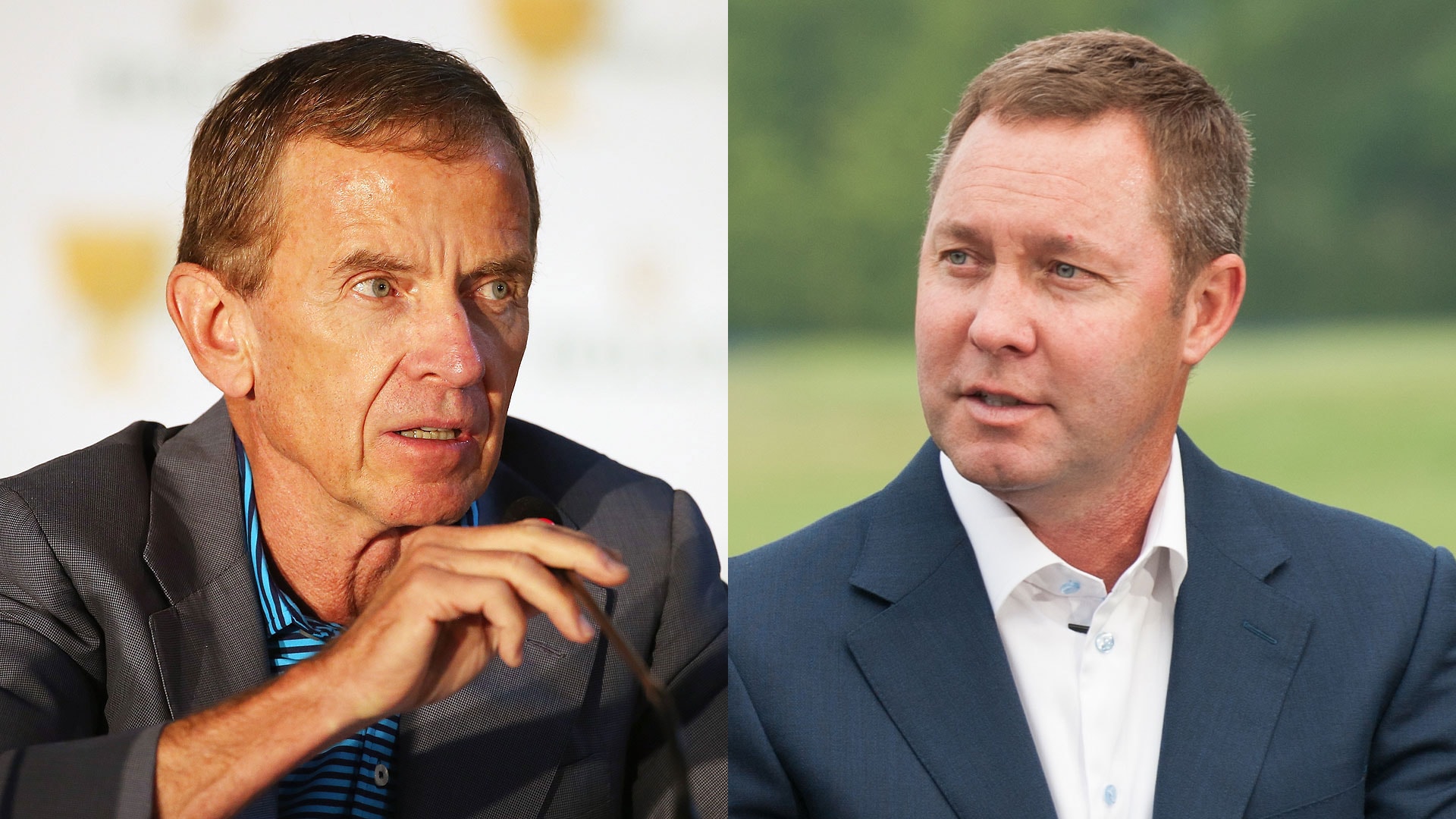 So what’s really at the heart of this new strategic alliance the PGA Tour and LPGA announced Friday morning?

It sounds like a potential game changer for the women. They can only benefit partnering with the PGA Tour, the colossus of tournament golf organizations. The resources and audience the men possess can boost the women’s game in ways previously never experienced, especially with the PGA Tour serious about “exploring the potential development of joint events.”

But what does the PGA Tour get out of the alliance?

While both tours made it clear there is no transfer of ownership or control, and that the PGA Tour and LPGA remain “wholly separate and independent,” it’s only natural to wonder if this is some sort of courtship that might ultimately lead to a marriage.

Is the PGA Tour interested in acquiring ownership of the LPGA if this now formal relationship blossoms?

“It hasn’t even come up in the dialogue,” LPGA commissioner Mike Whan told GolfChannel.com. “Nobody at the PGA Tour, at any level, has ever brought it up.”

Rick Anderson, the PGA Tour’s executive vice president of global media, said formalizing a working relationship with the LPGA was a natural next step given how much the organizations have been teaming together in growing-the-game initiatives.

“There are no formal discussions, or even a thought process, about going beyond where we are at right now.” Anderson said. “This isn’t something happening in phases or anything like that.”

So then why is PGA Tour commissioner Tim Finchem making this alliance formal? What is his tour going to get out of its investment in the women’s game?

“If we’re all approaching the issues facing us, and opportunities presented us, in a more coordinated way, we’re all better off,” Anderson said. “And the game’s better off.”

If the PGA Tour is serious about welcoming women in a special way, a more formal relationship with the LPGA makes sense.

Still, Friday’s strategic alliance announcement was a stunner among long-time devotees to the women’s game. The LPGA, after all, has been around since 1950 without any formal cooperative effort in place with the PGA Tour. There are a lot of industry insiders who never expected this.

“It’s a pleasant surprise,” said Rob Neal, chairman and president of the LPGA’s Tournament Owners Association. “It seems like it would be such a natural state of affairs, but having been around the game so long, you start feeling as if something like this was never going to happen.”

For Neal and other industry insiders, the alliance is a gold star for Whan, who in six-plus years as commissioner has rebuilt the LPGA from the withering entity he inherited. Back at the end of 2009, when Whan took over as commissioner, it would have been hard to imagine the PGA Tour wanting to partner with the troubled women’s tour.

That’s the beauty of this, Neal said. The PGA Tour sees an upside in what the LPGA offers.

“The PGA Tour wouldn’t do this if the LPGA was an unhealthy organization,” Neal said. “A knee-jerk reaction in the past might have been, `Well, the LPGA must be in trouble and the PGA Tour is bailing it out.’ But this is validation for the LPGA, some respect, because the PGA Tour believes doing business with the LPGA will help grow the game and it will also help the PGA Tour.

“There is no organization on the professional side of golf that has more respect than the PGA Tour. Globally, everyone wants to do business with them. They get to pick and choose who they do business with.”

And they want to do business with the LPGA.

In a significant new aim in the alliance, the PGA Tour will help the LPGA in future domestic TV negotiations.

“The PGA Tour is going to represent our TV rights domestically as we head to the end of our Golf Channel agreement in the United States,” said Jon Podany, the LPGA’s chief marketing officer. “There is a lot of opportunity there.”

Golf Channel’s TV rights deal with the LPGA runs through 2019.

“So as you are watching PGA Tour coverage, you will see updates on the LPGA and what’s coming up next week for the LPGA,” Podany said. “This will add tremendous value for us as we continue to elevate our sport and will add a lot of value for our sponsors, as well, to be included in that coverage.”

The PGA Tour is also serious about developing joint events with the LPGA.

“I’ve been talking to Tim [Finchem] about putting together a joint event since about the second day I was on the job,” Whan said. “To Tim’s credit, he has always shown an interest in that.”

“There is certainly a history of joint men’s and women’s events that were popular with fans,” Anderson said. “There’s the possibility we could revive some of those formats, but also look at some new and exciting ways to put the men and women together.”

The European Tour and the Ladies European Tour announced last fall that they will stage events together in May of this year at Royal Golf Dar Es in Morocco, with the women playing the Lalla Meryem Cup on the Blue Course and the Trophee Hassan on the Red Course. Anderson was asked if the PGA Tour would consider sharing a venue like that with the LPGA.

“Definitely,” Anderson said. “There is nothing on the board at the moment, so to speak, but it is certainly something that could be on the table and that would be explored. We’re in the early stages. We’re just starting to have these conversations.”

Industry leaders in the women’s game believe the PGA Tour wouldn’t be interested in joint events if the women didn’t have something valuable to offer.

“The growth of golf is stagnant in North America, so growth depends on bringing more women into the game,” said J.S. Kang of Sterling Sports Management, which represents Stacy Lewis, Brittany Lincicome and several other women pros. “Joint PGA Tour and LPGA Tour events are likely to get more eyeballs on the women’s game and raise the appreciation for it and the interest level.”

Kang believes the women’s game lacks the exposure it deserves and playing alongside the men will help remedy that.

“The frustration in the women’s game isn’t with the product, it’s getting more people to appreciate the incredible talent out there,” Kang said. “So, if these joint efforts can get more eyeballs on women’s golf, then there is a better chance at increasing participation in golf among women and at closing the unjustifiable gap that exists with purses and sponsorships between men’s and women’s golf.”

Chris Higgs, Octagon’s executive vice president of events and hospitality, also sees joint events as one of the best accelerants to the growth of the women’s game.

“You look at the parity of men’s and women’s tennis, and you see them playing together, in the same tournament, sharing a collective audience, but on their own stages at the same venue,” Higgs said. “There’s a great opportunity for both to succeed in that environment. Golf has never really explored that. The closest we’ve been were the U.S. Opens at Pinehurst.”

The revitalization of the LPGA under Whan can’t be dismissed as a factor in this alliance. He’s making the LPGA a good partner. The PGA Tour is seeing that in all the new relationships Whan’s team is forging. The PGA Tour is seeing that with the PGA of America partnering with the LPGA to put on the KPMG Women’s PGA Championship. They’re seeing that with the LPGA partnering with IMG to put on the ANA Inspiration, and they were witnesses to how LPGA pros helped make the USGA’s hosting of the U.S. Open and U.S. Women’s Open in back-to-back weeks successful at Pinehurst two years ago.

The PGA Tour also just watched the Royal & Ancient bring the Ladies Golf Union under its umbrella in Great Britain this year.

“These alliances have worked out for our partners, for the PGA of America and KPMG, for LPGA-USGA Girls’ Golf and for IMG and ANA,” said LPGA president Vicki Goetze-Ackerman. “Mike Whan and his staff have worked incredibly hard to get our tournament schedule back to 34 events. Our players are working hard to represent the brand, doing their part with media, with sponsors and with pro-am partners and, obviously, with their elevated play. We have some unbelievable competition every week.”

The fact that the PGA Tour isn’t portraying this new alliance as a chance to evaluate the LPGA’s suitability as a future marriage partner doesn’t mean this new relationship couldn’t blossom into a romance. Whether LPGA members would want to give up their autonomy to play under the PGA Tour’s umbrella is another question.

There seems no doubt the tours have a better understanding of each other today than they’ve ever had. That’s due in part to the fact that PGA Tour chief marketing officer Ty Votaw is a former LPGA commissioner and that Podany, Whan’s right hand man, is a former PGA Tour executive. Whan said they began talking about a possible alliance at The Players Championship last year.

“I've said to our members many times, there are a lot of things we cannot do alone, so we can either cry about it, or we can find a strategic partner who can help lift us to another level,” Whan said.

Whan was asked if he feels like the PGA Tour might be using this new alliance as a way to evaluate the LPGA’s worthiness as a future procurement.

“Are they kicking the tires?” Whan said. “I don’t know. If they are, they certainly aren’t disclosing it.

“I think, if I can speak for Tim Finchem in this instance, the PGA Tour recognizes that the growth of women’s golf and the female golfer is going to be important for their own growth. The LPGA can be a component in doing that. A healthier LPGA-USGA Girls Golf program and LPGA Tour gives us a lot more female fans going forward. I think there is some goodwill on the part of Tim and the PGA Tour in this, too.”