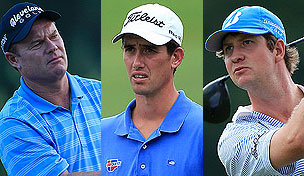 He twisted his face briefly in a knot and gently rubbed his belly Friday when asked to compare Q-School to the Web.com Tour Finals, the new four-tournament series that replaced Q-School this year as the system for doling out PGA Tour cards.

“This is a little easier, it’s less stress,” MacKenzie said.

MacKenzie wasn’t saying the Web.com Tour Finals are easy, or that they’re devoid of stress, but he believes this new series is a more just examination of who is ready to play the PGA Tour than Q-School’s draconian system was.

MacKenzie and Slocum aren’t alone thinking that way here at the Web.com Tour Championship, the series finale that will end with 50 PGA Tour cards awarded on Sunday. The absence of Q-School is practically a tonic for young and veteran players alike.

“It’s fairer than Q-School, to be sure,” said Aron Price, who has no fond memories of his two visits to the final stage of Q-School. “Q-School is a week that makes you feel like you’ve aged five or 10 years.”

The Finals spares players the angst of knowing their card is determined in a single, grueling week.

“I think it’s awesome,” said Chesson Hadley, 26, who finished third on the Web.com Tour regular-season money list and now has a chance to win the Finals series after posting a 4-under-par 66 Friday to take the lead halfway through the Web.com Tour Championship. “It’s so much more comfortable for everyone knowing you have potentially 16 rounds to earn your card than just six.”

“Every player loves it,” Putnam said.

Well, not every player. These are professional golfers. There’s never unanimous agreement.

“If you want me to be real honest, I’m not playing well, so I hate it,” Tag Ridings told Golf World in last week’s publication. “Yeah, there are a lot of us who wonder why they did this. In theory, I suppose it’s not a bad idea. In practice, it’s not great right now.”

Ridings may believe a lot of players wonder about the validity of the Web.com Tour Finals, but a sampling of players here this week casts Ridings among a minority. You may not like that the gut-wrenching drama that built over six days of Q-School isn’t building the same way in this four-tournament series, but that doesn’t bother the players in the least. The majority have been won over with the idea that this is a better way, if not the perfect way.

“It seems like more guys who were quietly questioning the concept have warmed up to it a little bit, especially guys who went out the first week and didn’t play well and then went out the next week and played well,” said Joe Durant, 49, a four-time PGA Tour winner. “It’s a long stretch. Anything can happen over four tournaments.”

“Variety of courses, variety of grasses,” Durant said. “Some courses have been a little more open, others have been tight. Rough’s been thick a couple places, not as thick at a couple others. There have been some differences in the courses, and I think it’s a good mix.”

Q-School left little margin for error. If you had one bad round at the first stage, you were not likely to advance. Same with second stage. At final stage, just one triple-bogey could doom your chances.

That’s not the case in the Web.com Tour Finals. There’s a generous margin of error built into the series.

In fact, Byron Smith, Andrew Loupe, Ashley Hall and Oscar Fraustro each missed the cut in the first three events of the Finals series, but their hopes of winning a PGA Tour card remain alive this weekend. They all made the cut Friday at the Web.com Tour Championship and can lock up a card with a hot weekend. A top-five finish will win them a PGA Tour card. In fact, a top-eight finish might.

A common criticism of Q-School was that a player could ride one hot week at the final stage to a card.

That’s still the case in the Finals.

Trevor Immelman and Ricky Barnes are going to win PGA Tour cards despite the fact that each of them missed the cut in three of four starts in this Finals series. Immelman secured his card winning the Hotel Fitness Championship, Barnes with a T-6 at the Chiquita Classic.

Most players don’t view this lack of consistency in the Finals as a drawback. They see a larger picture. They see that they’ve proven themselves over a full year just to give themselves a chance to ride a hot week to a PGA Tour card.

Seeing a colleague ride a hot week to a PGA Tour card is more tolerable knowing he earned his chance over a year on the Web.com Tour or PGA Tour.

“They’re saying you did a lot of your work throughout the year,” Barnes said.

“This is a better idea, but it might need to be tweaked a little bit,” Adam Crawford said.

Whether it’s tweaked or not, the Finals is proving easier on stomachs than Q-School did.