Pressel goes from prodigy to mentor 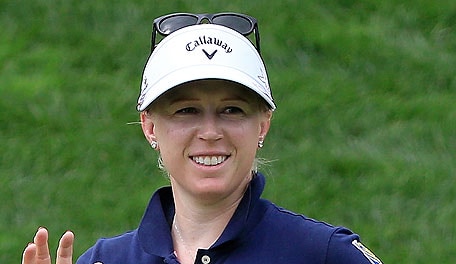 Yeah, she can’t get her head around it, either.

It doesn’t seem all that long ago that she marched onto the grandest stage in women’s golf as a 13-year-old at Pine Needles, the youngest player at that time to qualify for a U.S. Women’s Open. With a blond ponytail bobbing out of the back of her cap, with hazel eyes and a mouth full of tinny braces, she made her entrance back then with the poise of a child star. A small swarm of photographers were in tow the first time she stepped on the range that week in North Carolina.

At 27, Pressel still commands a special place on the U.S. Women’s Open stage.

You see it in the eyes of so many of the young amateurs who’ve made it here. They all seem to know Pressel, even though many of them were too young to actually remember if they watched her play her first U.S. Women’s Open in 2001.

Of course, Pressel’s victory at the 2007 Kraft Nabisco also makes her relevant to today’s youth. Pressel became the youngest winner of a major championship with that victory at Mission Hills.

Japan’s Suzuka Yamaguchi is the youngest player in this year’s U.S. Women’s Open. She was 14 years, 11 months and 10 days old on Thursday. She was just 8 months old when Pressel played Pine Needles. Still, Yamaguchi wanted to play a practice round with Pressel this week.

So did Kristen Gillman, the 17-year-old U.S. Women’s Amateur champion.

Pressel played with all of them in her practice rounds at Lancaster Country Club this week. And she relished the memories it brought back.

“That was me,” Pressel said. “I was one of those young whippersnappers, and now I’m the old lady in the crowd. I don’t feel that way, but it’s starting to become that way, whether I feel that way or not.”

Actually, Pressel played like a woman coming into her prime Thursday at the U.S. Women’s Open. She opened with a 2-under-par 68, getting herself in early contention. She made a hard run at winning the season’s opening major, missing out on a playoff by a shot at the ANA Inspiration. She tied for fifth at the KPMG Women’s PGA Championship a month ago. She’s back on her game, back playing her best in the game’s toughest tests.

Pressel forged her identity at the U.S. Women’s Open as a teen phenom. It wasn’t just her debut as a 13-year-old. She qualified again as a 15-year-old at Pumpkin Ridge and made the cut, and then she nearly won the championship as a 17-year-old at Cherry Hills. She tied for second there with Birdie Kim beating her with an improbable hole out from a bunker at the last hole.

With 30 teenagers in the field this week, Pressel can’t help but be reminded.

“I think it’s special,” Pressel said. “One of the things that make this event unique is all the amateurs that do get the opportunity. I had such incredible experiences, and I remember trying to sign up with as many players as I could in practice rounds.”

An adoring Yamaguchi was so thankful for the chance to play with Pressel, she presented her with gift of Japanese chocolate sticks.

Brooke Henderson didn’t play a practice round with Pressel this week, but the 17-year-old phenom called Pressel her idol when they played together at the Swinging Skirts Classic earlier this year.

“Morgan makes time for the younger girls,” her caddie, Barry “Rock” Cesarz, said. “One girl told Morgan that she’s her favorite player of all time.”

The interactions remind Pressel when she mingled with her idols that first year at Pine Needles.

“One of the biggest things I remember was sitting in the locker room at Pine Needles in a rain delay,” Pressel said. “I just didn’t want to leave. Here were all these people I watched on TV for so long, and I wanted to talk to them as long as I could. I sat in there for hours. My parents were like, `Let’s go, let’s go home’ and I’m `No, I want to sit here and talk.’

“It’s crazy to think that I'm the baby-sitter now. Everyone was baby-sitting me back in the day.”

“That was the time I made a commitment that golf was it for me,” she said.