Pressure on as U.S. women try to qualify for Solheim 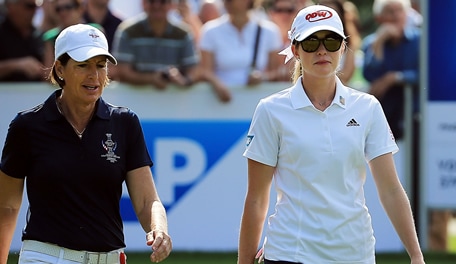 The pressure will run deep through the field at this week’s Canadian Pacific Women’s Open with more than a winner’s trophy and check as prizes to claim.

It’s the last week Americans can qualify to make the Solheim Cup (and Europeans, too).

There’s pressure on Gerina Piller to hold down the final spot on the U.S. points list.

There’s pressure on rookie Alison Lee to hold down the final spot on the U.S. world rankings list.

And there’s pressure on Inkster, who’s going to disappoint somebody with her two captain’s picks.

“It’s going to be tough,” Inkster said. “I’m not looking forward to it. I’m already stressing out about it. I’ve got to go with my gut and go with who I think is going to fit in best with the team and what we need in the team. It’s never fun to disappoint anybody. So, it’s going to be a tough week for me.”

Wie’s been struggling with left hip, knee and ankle injuries for the last three months. She’s playing the Canadian Pacific Women’s Open, her first start since withdrawing after a fall at the Ricoh Women’s British Open three weeks ago. Inkster’s sure to be watching Wie closely.

“We’ve had a lot of discussions,” Inkster told Golf Channel’s Tom Abbott. “She’s going to be playing this week and see how it goes, but that’s a big question mark right there. I really need her to be 100 percent over there. She said she would be honest with me come Saturday and Sunday. That’s all I can ask.”

The Americans know how important taking a healthy roster to Germany will be. Back in 2011, Cristie Kerr conceded her singles match in Ireland because of a wrist injury. She was the anchor match with the Americans losing, 15-13.

Inkster says she needs players who can give her 36 holes a day.

“If you can’t play 36 holes, you aren’t really helping the team out,” Inkster said.

Piller holds down the eighth and final qualifying spot on the U.S. points list, and she’s fairly safe there. There are only four players who can bump her out of the top eight and three of those players have to win to do so. No. 9 Lizette Salas could move up with a fourth-place or better finish, depending what Piller does. No. 10 Brittany Lang, No. 11 Paula Creamer and No. 12 Jessica Korda need to win to have a chance to move into the top eight. Piller can hold them all off with a good finish. Below is a look at the current U.S. standings, with the point differential between respective players and Piller in parentheses.

Creamer has a chance to pass Lee in the world rankings with a finish of 20th or better if Lee misses the cut. So much depends on what other players do. The world rankings permutations are so complex, Rolex world rankings administrator Bob Rodgers is going to be on hand this weekend to help the Americans and Europeans crunch the numbers at Vancouver Golf Club.

While it’s difficult to imagine Creamer won’t be a captain’s pick if she doesn’t automatically qualify, Inkster doesn’t sound as if she’s giving anybody assurances. Creamer has played on the last five U.S. Solheim Cup teams. She has a 12-6-5 record.

“It would be hard to leave Paula Creamer off the team, but I need to have my best players,” Inkster told Abbott. “We’ve lost the last two times, and I really want to turn that around.”

Creamer has missed the cut in her last two starts. She has three top-10 finishes this season with her best finishes a T-6 at the Walmart NW Arkansas in June and a T-5 at the Kingsmill Championship in May.

“I've never been in this situation before,” Creamer said. “I've been on five Solheim Cup teams, and I've made my way on every one of them. It is what it is. I wish I would have played a little bit better, but I've been really working on things and trying to just get better in general. I know I can do it. There is no reason why I can't go on and play a good week.”

Korda made the last American team, but she has struggled this summer with an elbow injury. She has missed the cut or withdrawn in five of her last six starts. Korda would love to play, but she says she understands a player can’t expect a captain’s pick.

“There are ten spots to be had, and if you can't play on to those ten spots, then you're not going to play and that’s your own fault,” Korda said. “You had the opportunity and two years to qualify. Sometimes that's the way it happens. I started the season on fifth in the rankings, and now I'm outside of everything.”

Lang takes some solid play over the last two months to Canada. She tied for sixth at the Meijer Classic and tied for fifth at the Marathon Classic. She’s 5-4-2 playing on the last three Solheim Cup teams.

“I fall asleep thinking about the fun Solheims I've had and how much it means to me,” Lang said. “But at the end of the day, that's not going to make me play better. You just have to come out and keep doing what you've been doing.”

Martin, Austin Ernst and Christina Kim have all been identified as being on Inkster’s short list.

“We've had these practices and we've had these dinners,” Inkster said. “You get used to being on a team, and then I tell you you're not on the team, it's going to be tough.”