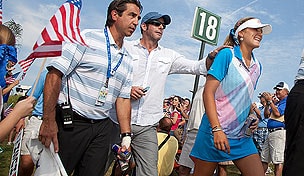 There’s no holding back Lexi Thompson.

Or maybe there is.

That was the head-scratching reaction after you were done marveling at the teen phenom’s history-making performance Sunday in a victory at the Navistar LPGA Classic.

At 16 years, 7 months and 8 days old, Thompson became the youngest winner in the 61-year history of the LPGA.

Now, as part of the spoils of her victory, Thompson would relish becoming the youngest tour member in LPGA history. She believes she’s ready for full tour privileges.

“Obviously, I feel that way, and I do want to play this tour full time,” Thompson told GolfChannel.com. “But I can’t make that decision.”

The LPGA has a rule that tour members must be at least 18 years old.

That’s at the heart of Sunday’s fallout from the victory.

Should the LPGA grant Thompson a waiver of its age restriction so she can claim tour membership with the victory? Or should the tour insist she continue through LPGA Qualifying School this fall to gain membership?

Here’s the deal in a nutshell:

• When an LPGA non-member wins a tour event, she has the option of claiming tour membership. She can claim it immediately, granting her membership through the rest of the current year and through the next year. Or, she can defer membership, claiming it at the start of the following season.

• Because the LPGA has the 18-year-old age restriction, Thompson can’t claim tour membership for the Navistar victory. She must file a petition for a waiver of the age rule. If the waiver’s granted, she can then claim the membership that goes with the victory.

• The LPGA earlier this year granted Thompson special permission to attend Q-School with the understanding that she would be granted a waiver of the age restriction should she earn member status through the three-stage process. Thompson swept through Q-School's first stage easily.

Now that Thompson won an LPGA event, her camp doesn’t want her to have to continue through Q-School.

“Hopefully, this win will change things, but it’s not my decision and I’m not really worrying about it right now,” Thompson said.

Bobby Kreusler, Thompson’s agent, told GolfChannel.com that he will be filing another petition seeking a waiver of the tour’s 18-year-old age restriction so Thompson can claim tour membership.

“We will now be seeking full membership based on winning this tournament,” Kreusler said.

There was real uncertainty in the wake of Thompson’s victory Sunday over whether the commissioner will grant the waiver.

Shortly after the win, commissioner Mike Whan released a statement congratulating Thompson and pointing out that she was eligible to gain tour membership advancing through Q-School. One news organization termed it a “buzzkill.” The statement was a befuddling reminder that even confused Thompson’s agent. Kreusler wasn’t sure whether the tour really expected Thompson to continue to pursue Q-School.

“I need to speak to Mike Whan about what that statement meant,” Kreusler said. “He’s always been honest and transparent.”

An LPGA official sent a followup to Whan’s statement Sunday acknowledging that if Thompson filed a separate petition for waiver off the Navistar win, the commissioner would review it.

We know Thompson's camp will file that petition, and we know the ball will move to Whan’s court. We just aren’t certain what he’ll do.

We do know this: Thompson made a more convincing argument over four days at Navistar than she’ll make in three stages at Q-School. The tests aren’t even close.

Thompson didn’t just beat a stellar field at Navistar. She steamrolled it in a five-shot runaway.

She beat world No. 1 Yani Tseng by 14 shots. She also beat world No. 2 Suzann Pettersen by 14. She overpowered the entire field, leading the tournament with an averaging driving distance of 277 yards, besting even Tseng, the longest driver on tour.

Thompson will file some paperwork this week that couldn’t be more convincing than the scores she signed for on Sunday. Yes, it’s about more than scores at 16 years old. It’s also about emotional readiness. But even Hall of Famer Juli Inkster, not a big fan of teen access to the tour, believes Thompson’s proven herself ready on that front.

The commissioner will decide that.