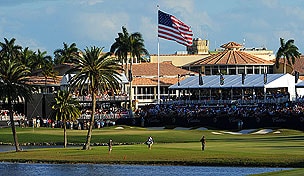 Getty Images
Brooks Koepka of USA tees off on the 3rd hole during day 2 of the BMW PGA Championship at Wentworth on May 22, 2015 in Virginia Water, England. (Photo by Richard Heathcote/Getty Images)  -

The redesigned Trump Doral Blue Monster unveiled to the media Thursday is bigger, grander and tougher than the aging Dick Wilson design played as home to the WGC-Cadillac Championship.

The course is also more visually appealing, more the beauty and beast that Wilson imagined when he built it in 1961, before high-tech clubs and balls emasculated his classic test.

While the early media reviews of the redesign are strong, the real measure of what owner Donald Trump and architect Gil Hanse have created will be judged by PGA Tour pros coming to play the Blue Monster in a month. They can be brutally difficult to please.

Will they embrace it?

Or will they pan it?

“No. 1, I want to hear that it’s fair,” Trump said. “If you hit good shots, you will be rewarded for good shots.

“The word fairness is important. I really believe the great players are going to find it very fair.”

“They butchered a good course as bad as I’ve ever seen,” Scott Hoch, Doral’s ’03 champ, said back then.

That redesign was met with so much backlash, Doral’s ownership hired Jim McLean to basically undo all of Floyd’s changes and return the course to the original Wilson look.

Rocco Mediate, who won the Doral-Ryder Open in 1991, is betting there will be a completely different player reaction this time around.

“It’s fantastic,” said Mediate, who played the course Wednesday with Trump. “Donald doesn’t do things that aren’t fantastic. Gil Hanse did a great job. If the guys don’t like Doral now, they should never be invited back.”

Without the wind, golf’s best have been making the Blue Monster look like the Blue Marshmallow, going low in birdie binges. Mediate doesn’t see that happening now.

The Blue Monster was lengthened, but that’s just part of the strategic element Hanse brought back to the course. Wilson’s design was originally all about the angles. He built a course full of doglegs with punishing bunkering in the elbows. He angled greens awkwardly, making approaches narrower than they appeared. Wilson’s angles were ultimately lost with today’s players bombing drives over the bunkering in the corners of his doglegs and then using wedges to take the awkwardness out of his targets.

Hanse put meaningful angles back into the Blue Monster’s design. While managing to put his own distinct fingerprints on the redesign, Hanse also managed to restore the strategic feel Wilson created.

Of course, nobody knows what Dick Wilson would say about the redesign. Wilson died in 1965. His chief assistant on the project, Robert von Hagge, died four years ago.

While Hanse originally sought to recreate and preserve Wilson’s intentions, his work evolved with Trump pushing for a bigger and grander makeover through the process.

“I think we started with a restoration in mind, but as we really opened the place up, it became more of a redesign, and at this point in time it’s a brand new course,” Hanse said.

What players have loved about Doral through the years is how fair it played in those prevailing tropical winter winds. They could get around hitting the knockdown shots those winds required, with Wilson giving them manageable pathways through the wind. That was a stark contrast to what players hated about the Honda Classic in the late '80s and early '90s, when it was played the week after Doral at the TPC Eagle Trace, just up the road in south Florida. Forced carries over a lot of water in heavy winds off the Everglades drove players crazy at Eagle Trace. Greg Norman called it “carnival golf.”

Hanse made the Blue Monster tougher in part by adding a lot more water. On Wilson’s design, water came into play on six holes. On Hanse’s redesign, water is a major factor on at least 10 holes.

The 15th and 16th holes were made more dramatic adding water. Hanse transformed the 15th  from what had become a nondescript par 3 into a challenging short par 3 with a peninsula green. The 16th is a short par 4 with a small lake left of the fairway and in front of the green. The eighth, ninth and 10th holes are all more dramatically reconfigured around water.

The famed 18th is pretty much the same fearsome test Wilson created. Hanse preserved it while still enhancing it. A neat new row of palm trees more tightly lines the right side of the fairway now, better framing and shaping the tee shot.

The Blue Monster will no doubt make a strong first impression on Tour pros coming in next month. The lasting nature of that impression will emerge as Woods, Mickelson, Els and McIlroy and others try to win a trophy there.