Reid proud of effort in solo match against Japan 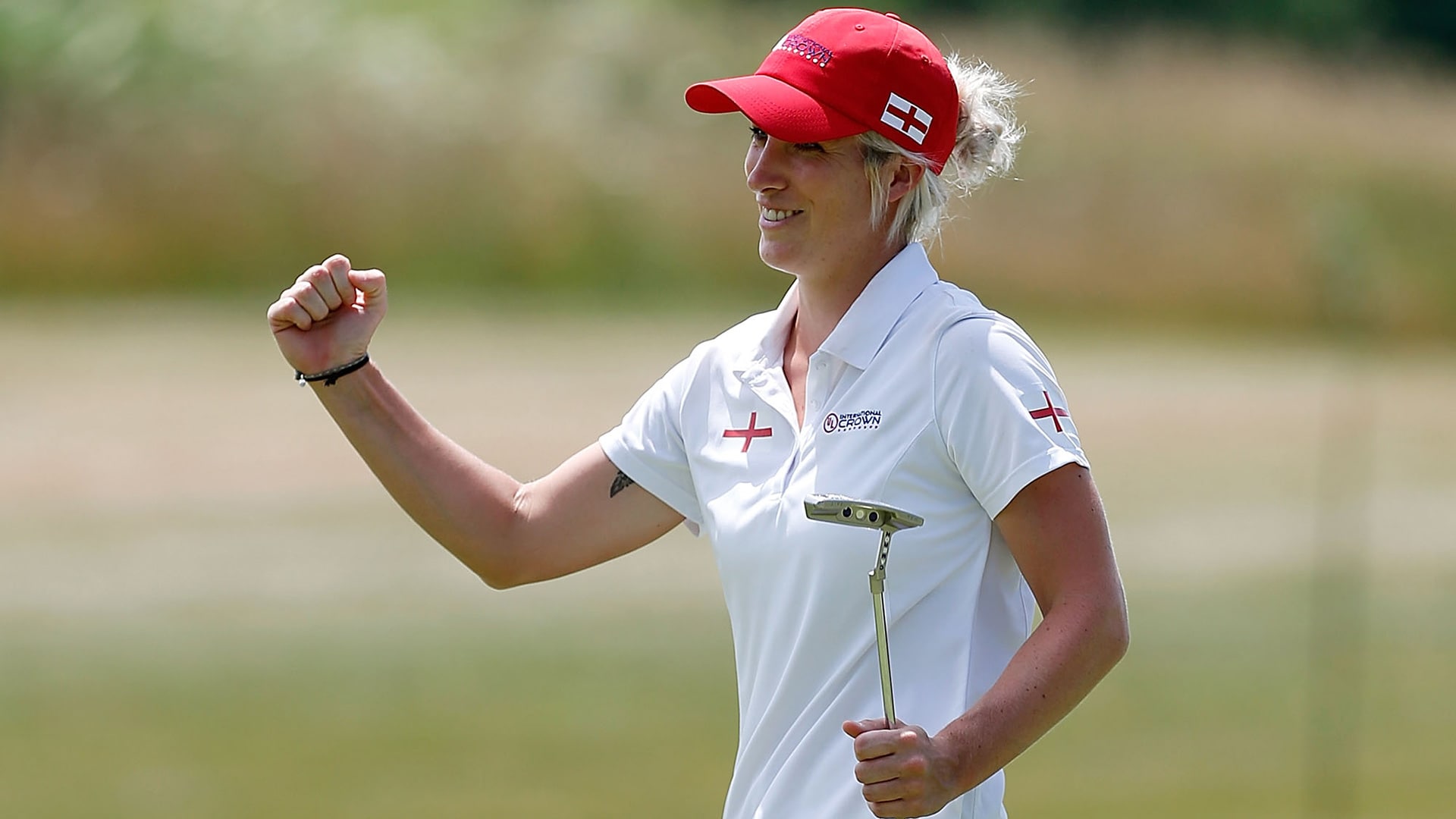 GURNEE, Ill. – England’s Mel Reid lost her match Friday at the UL International Crown, but she won a legion of new American fans with the fight she put up at the Merit Club.

About 45 minutes before she was going to tee off, Reid learned her team’s star, Charley Hull, was probably going to be too ill to play. Hull began feeling an asthma attack coming on Thursday at a sponsor dinner, and she woke the following morning feeling worse, struggling with her condition and a fever. Under a doctor’s advisement after arriving at the course, she pulled herself out of the fourball match against Japan.

That meant Reid was left to take on the Japanese in a best-ball format all by herself.

Reid is No. 123 in the Rolex Women’s World Rankings, but this challenge would have been daunting for a top-10 player.

“I would say that I am best when I'm really under severe pressure, not just in golf but in life,” Reid said. “I've been under quite a lot of pressure in many situations, and I did see that today. I could have quite easily said, `You know what? I'm on my own. I know I'm not going to win.’ But there's something that switches inside of me, where when I'm under severe pressure, I tend to just turn it on.”

Reid showed that quality four years ago, in the toughest challenge of her life.

Back in 2012, Reid’s parents were on their way to watch her play in the Ladies German Open when they were involved in a head-on car crash near Munich. Reid’s father, Brian, survived, but her mother, Joy, did not. She died of internal injuries a day after the crash.

Reid, 28 today, was devastated and struggled emotionally in the aftermath, but she also achieved one of the more remarkable triumphs in Ladies European Tour history. She won the Prague Masters a month after the accident.

Japan’s best fourball team, Haru Nomura and Mika Miyazato, defeated Reid, 1 up on Friday, but players who know Reid weren’t surprised she pushed them to the limit.

Remarkably, the match came down to a final shot, a final putt.

After Reid holed a 35-foot birdie at the 18th, Nomura had to hole a 5-footer for birdie to beat her.

“She was great,” Nomura said.

Reid has been challenged all year after being dealt another blow late last year.

A five-time LET winner, Reid felt ready to take her game to the LPGA. She was going to play her way through LPGA Q-School late last year, but she never got the chance. Her manager forgot to register her for Q-School before the deadline expired.

“I’m still not over that,” Reid said.

It says something about Reid that she has the same manager today.

Through Friday’s match, Reid felt the American-dominated galleries getting behind her quest. She didn’t sense they liked her too much Thursday, when she and Hull were teaming to beat Americans Stacy Lewis and Gerina Piller, but she felt all that change as she battled steep odds against the Japanese.

“Today, we seemed to get more and more fans as it went along,” Reid said. “I must say a huge thank you to them, because walking up a few of the holes, they were just amazing, everyone cheering me on. I needed that. I felt kind of on my own a little bit out there. But the crowds were amazing, and they really kept my spirits up.”

Reid was 2 down through 11 holes when she rolled in a 10-foot birdie at the 12th to move 1 down. At the 13th she electrified the gallery holing a lob wedge from 70 yards for eagle to square the match. She blistered the back nine in 6 under.

“It was a perfect challenge for Mel,” Hall of Famer Karrie Webb said. “She sometimes needs a little inspiration or a little motivation, and I think as soon as she knew she was on her own, it doesn't surprise me that she gave herself a chance to win the match.”

Reid has been struggling with her game this year, and she struggled Thursday in the opening round, but she found something in herself Friday to muster her best with the odds against her.